I am finally in the 2nd trimester, although if I’m being honest, the first trimester went pretty quickly.  I don’t feel like I have to nap every day now, which is nice, and generally I feel pretty darn good.  Every once in a while I get some twinges if I move weird and I swear I’ve felt the baby move a few times already, but that could be my imagination.  Last time I thought I felt them early too, but then I didn’t REALLY feel Jamison until I was like 22 weeks along, so we still have a while to go.  I’m still up about 4lbs from my pre-pregnancy weight but I’m still in a normal BMI range, so I feel good about that.  I’m going to try hard to not gain a ton this pregnancy.  And my blood sugars have still been good too, although I am limiting my carbs most of the time to help them.  My fastings have been in the 70’s, and hopefully I can keep them there throughout the pregnancy.  Time will tell I suppose, but I feel like I am, in general, more healthy and aware of how things affect my body this time around.  And 3 kids keep you active even if you’re not trying to be active.  But we take the kids for walks or bike rides most days.  The other day wore a maxi skirt on our walk around the neighborhood and normally that wouldn’t be comfortable because my thighs used to rub together (chaffing), but they didn’t this time.  I feel thinner and more healthy, and I don’t mind getting a baby belly, as long as I can keep the fat off everywhere else.  But as I said, my diet is REALLY helping this and I have no doubt that we got pregnant so easily this time because I had dropped about 25lbs which helped my hormones regulate. 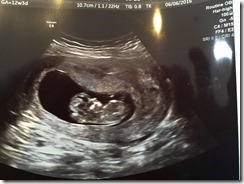 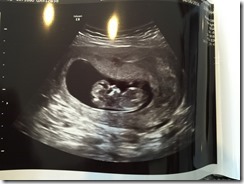 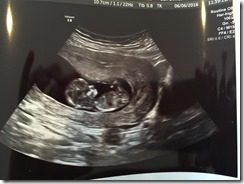 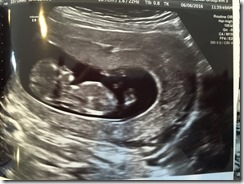 This time I opted to get an advanced blood test that was offered to me because I’m over 35.  (Or I AM 35, but whatever.)  They do a more “high tech” blood test than the regular state ones where they pull the baby’s DNA from my blood and test it for a bunch of different genetic issues.  The ONLY reason I got this test was because it will also tell you the gender.  I was so anxious to know the gender, but at the same time, I didn’t want to know because I was nervous something else would show up from the genetic testing too.  I called every day to see if my results were in for about 4 days straight and finally I just gave up because I would get a sick to my stomach feeling every time I called.  Today, the OB’s office called me and she told me that all the genetic testing came back negative (thank GOD) and that “the DNA findings were consistent with female”.  Honestly, I cried.  I have had a feeling all along that I was carrying a baby girl, and I’ve told quite a few people that, but you never know if it actually is intuition or just me really hoping for a girl.  All of us wanted a girl (Mark, Abbie, my parents and me) and Ben wanted a “boy that wears a bow”.  So he was a bit disappointed but Abbie was so excited she was screaming.  And Mark is super excited too, and I think relieved because he knows I’m good with 4 if we had 2 boys and 2 girls.  It’s fun to know already at 14 weeks, although they said it isn’t 100% positive, but more like 99%.  Close enough for me.  We’ll confirm at the 20 week ultrasound.  I have also had a feeling that this baby is healthy and that I can sit back and relax and enjoy this pregnancy since it is most likely the last so hopefully the 20 week ultrasound doesn’t pull up any other concerns.

I am very short on patience with my big kids lately, which is partly why I thought it was a girl.  My emotions all run high, no matter what they are, and I remember them being like that with Abbie too.  I also don’t always sleep the best (and normally I sleep like a rock) and I have some crazy dreams (and normally I don’t really dream at all).  And I want chocolate all the time, which doesn’t help with sticking with my diet, but I am still successful with it most days. 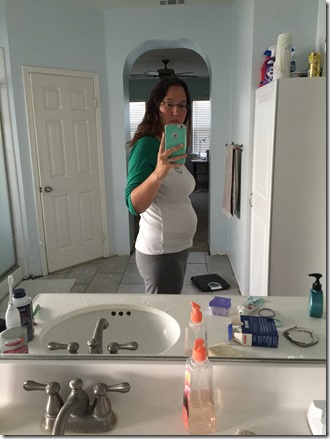 We are so excited to have this last baby, although some days I wonder if I can handle 4 of them by myself while Mark is at work (or even worse, deployed for a year).  Life is nuts with 3 of them (and 3 dogs that always want attention too) and our house is very loud and chaotic most days.  We went shopping for a bike for me this weekend and just getting the older two to stand still and not push over whole rows of bikes was a challenge and Mark was with me.  We walked through Hobby Lobby and they asked us to buy them something about every other foot they walked which is exhausting.  Jamison is by FAR the easiest to deal with right now and the big kids can do well when they want to, but when they don’t want to, it’s hell.  Mark and I both came home exhausted and I know adding another one to the mix will make it even more crazy, but also fun.  Sometimes.  Hopefully by the time J and baby girl are 4 and 6, Abbie and Ben will be more mature and easier to deal with.  But it still terrifies me to think about Mark being gone a lot with the military and me dealing with 4 kids by myself.  It’s a process to get 3 kids to bed by myself now.  I can’t even imagine getting 4 kids to bed.  We’ll cross that bridge when we get there.

Overall, we are super excited about December and the arrival of our newest family member.  And we are THRILLED that she’s a girl!  Now to pick out a name… =)