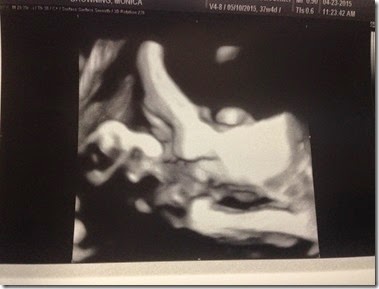 Now that the house is under contract and through the BINSR period, the next thing to focus on is the birth of our little guy #2 (who still doesn’t have a name)….  I went in for my routine BPP (biophysical profile) last Thursday and they gave me a few 3D images of him!  It was the first 3D ultrasound I’d had with any of my kids so I was pretty excited about it.  He passed his BPP just fine, as he always has, thank God. 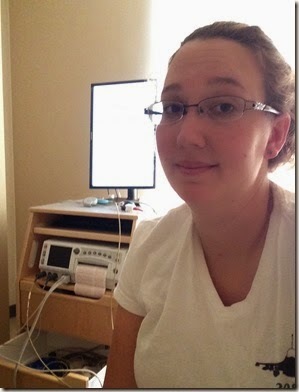 Today I had my NST and my OB appointment.  He had a few decels on the NST so they told me I’d have to go to the hospital for another NST and BPP to make sure everything was okay…  Grrr…  I told Mark as soon as I saw the decel on the print out for the NST that I would have to go to the hospital, and I was right.  I didn’t freak out this time though, like I did last time.  I was prepared for it.

I saw midwife Ingrid today and last time I saw a different midwife, she didn’t want to check me because she didn’t want to “disturb” anything, so I had assumed Ingrid would say the same thing.  Wrong.  She wanted to check me and then before she did that she asked me if I wanted her to strip my membranes while she was checking me.  I had this done with Abbie and remember it being not too bad, but when Dr Colwell checked me last week, it hurt, so I was nervous this time.  We decided to go ahead and do that, and it didn’t exactly tickle, but it wasn’t too bad either.  Just a lot of pressure and a little bit of pulling/pain.  It would be really nice if I could go into labor by myself without being induced but I’m not holding my breath.  And I was still at 3cm and she said I MIGHT be at a –1, and she’d say I’m more 50-60% effaced, so I’m apparently going backwards in progress…

Today the hospital visit took FOREVER.  I got there around 1:30 and didn’t leave until almost 6pm.  He passed the NST fine and also the BPP but it took a while to get called back and also for the doctors to review them after they were done.  He had the same decels on the hospital NST but they said they were normal movement decels and not anything to worry about.  Apparently for them to worry about them they have to drop over 15bpm for at least 15 beats and his weren’t doing either of those.  It would just dip a little bit after he had an accel before it reached his norm.  I had my favorite ultrasound tech this visit too and asked her if she saw any calcification on my placenta and she said she only saw a little bit which was normal at this stage in my pregnancy and that was reassuring as well. 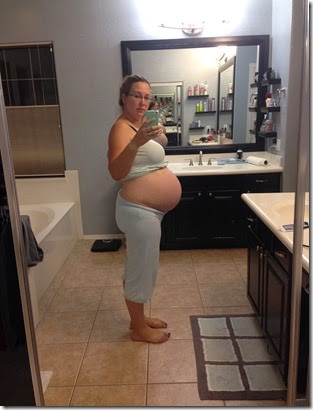 I am nervous about having this little guy.  At my growth scan on Thursday he measured 7lbs5oz (at 37weeks4day) so that was a little reassuring.  Much better than the 9lb12oz they told me Ben was at 38weeks.  Even if they’re over a lb off he’ll still be smaller than Ben was and Ben came out pretty easily.  I know my OB wants to break my water to kick off labor and that makes me a little nervous.  They did that when I was having Abbie, and it did kick off labor pretty well, but 10+ hours of laboring and I was only 1cm more dilated and then had to be put on pitocin (and got an epidural) and had her like 8+ hrs after that.  With Ben, I got all checked in and got induced with pitocin and less than 6 hours later with 15 seconds of pushing he was here.  So part of me just wants to do the pitocin again since that was by far my easier birth experience, but it was also my 2nd birth experience which is typically easier than your first.  I talked to one of the nurses at the hospital today and she said that it’s more common for them to break waters to induce if you’re already dilated so they’d probably do that and then use pitocin later if needed.  She also said since my OB wants me here at 1am and probably doesn’t come on call until 7am, that if they start off with pitocin right away, I might not make it until my OB gets there since it worked so well last time.

Pretty much I just want the birth over with and all the “unknowns” of this birth to be behind me.  I’m done with having GD too and I’m tired of having a few friends basically keep telling me it’s not a huge deal having GD and I just need to deal with it because things could be a lot worse.  Yes, I realize things could be worse, but I’ve struggled with GD and I don’t do well with diets or with having the same foods I’ve had before and have them give me completely different blood sugars.  If it weren’t for GD I’d stay pregnant a few more weeks with no problem.  I’m fine with baby boy being inside.  I’m tired of dealing with GD, and because of that, I want this pregnancy over.  It’s crazy to think that this time next week I’ll hopefully be holding my brand new little boy!  I’m excited to be a family of 5!!