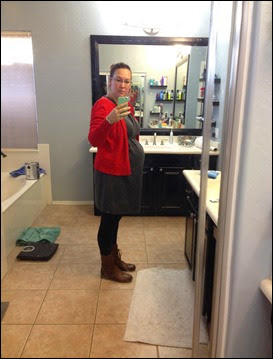 Size of Baby? About a foot long and around a pound and a half

Maternity Clothes? I just bought a bunch more.  It’s odd to me that clothes (specifically pants) I found comfortable last pregnancy aren’t comfortable this pregnancy.  I only had one pair of jeans that I really liked and Motherhood Maternity was having a 40% off clearance sale so I bought 2 more pairs, along with another pair of corduroys, a maxi skirt and a dress.  Should be set to go to NYC at the end of February now.

Weight Gain? Around 13lbs.  I wish it was less.

Sleep? Sometimes.  It’s definitely getting a little more difficult.  I try to put a pillow between my legs to help keep my hips aligned, but it doesn’t help a ton.  My hip that I’m laying on starts to hurt after a while so then I have to roll over, which is a a challenge.  And usually I get up to pee when I wake up to roll over and that hurts like heck to walk to the bathroom from the bed.  Usually somewhere between my bed and the toilet my hips do this huge “clunk” that I can definitely feel and sometimes hear, and then I feel better.  The joys of pregnancy.  He’ll be worth it.

Food Cravings? Still no new cravings.  Nothing sounds good lately.  I don’t feel like I’m eating healthy enough and then I don’t know what to eat so I just don’t eat, which causes headaches.  I’ve been trying to eat more salads, but salads just don’t fill me up and so I get a headache almost every time I eat one, unless I eat a bunch of stuff with a salad.  I hope to God I don’t have diabetes this time around.

Best Moment This Week? Hearing his heart beat again.  I’d been a little worried because I hadn’t been feeling him much, but he was doing well and moving a ton when she was listening for his heart beat with the Doppler.  A close second would be finding out that the GD (gestational diabetes) cut off for the clinic I go to now is 140.  Long story short, my last OB in the States had a cut off of 140 also.  I tested at 139, so when I moved back to Italy at 33 weeks, they said that I hadn’t passed because their cut off was 130.  So they tested me 2 more times until I failed it at 37 weeks.  So knowing this clinic has the 140 cut off for GD gives me a little bit of hope that I could pass it.

What I am loving? The fact that Mark and Abbie have felt him move.  Abbie was pretty darn excited.

Movement? Yep, he moves quite a bit now.  Last week he started moving a ton and now I feel him all the time, mostly way down low, but sometimes up high also.

What I’m looking forward to: Him moving up a little.  Apparently he’s dropped a bit since my 20 week update and he’s directly on my bladder, which makes me feel like I have to pee ALL the time.  As in like 3-4 times an hour.  It is SO annoying.  I will take the shooting back/hip/pelvic pains any day over the constant feeling that I have to pee.  It’s horrible.  So I hope he rises soon so he gets off my bladder some.

Other Updates…Not really.  I feel pretty good, despite my back/hip pain and the having to pee constantly.  I’m excited to meet this little dude.

You look great! I love that Abbie got to feel him!