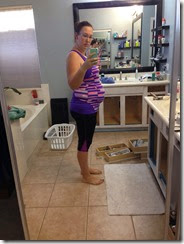 Size of Baby? 10” head to heel, about the size of a banana

Maternity Clothes? Yes.  I LOVE my pregnancy leggings with the stretchy band that goes over my belly.  However, I need more longer shirts/tunic because I get really self conscious if I wear leggings with anything that doesn’t cover my butt.

Baby’s Sex? He’s a boy!  I had a good feeling in previous weeks that he was a boy, but I was still hoping like crazy that he was a girl.  The deal was is this baby was a girl, we could talk about being done.  If it was a boy, we’re definitely trying for one more (so I can have 1 girl and 3 boys, of course).  Either way, I’m still excited.  I hadn’t been feeling him much so when we saw the heartbeat and that he was doing well, I was so relieved I didn’t really care what she said it was.

Sleep? I’m getting more pelvic pain when I try to roll over, but overall, I can sleep pretty well.

Best Moment This Week? Finding out the sex last week, and that he is doing well.  It’s a relief for sure.

What I am loving? Going through all of Ben’s old clothes to see what I have and what I need.  If this baby had been a girl, I would have been set on clothes because Abbie was born in May also.  However, Ben was born in December and this baby will be born in May, so they’ll be almost exact opposite seasons for the first year or so.  But… I love to shop for baby clothes so I’ve been having fun picking up things I find here or there on sale.

Movement? Finally I’ve been feeling him more often, which is a relief.  I found out at our ultrasound that I have an anterior placenta (the placenta is almost exactly in front) so it’s thickness blocks me from feeling his kicks very often.  I do feel him up high though, and on the sides sometimes when I’m laying on my side.  And when I have to pee I can feel him bouncing on my bladder, but not usually in the front.  And it’s not been hard enough yet than Mark could feel it either.  Hopefully soon!

What I’m looking forward to: Mark and Abbie being able to feel him move also.  Abbie asks all the time when she’ll be able to feel him move.  We’re going to paint the nursery this week too, and I’m excited about that.  It was one of the last rooms left in our house to paint.

Other Updates… I feel like I’m carrying this baby higher than my other two.  It’s already a little hard to breathe at times because I feel like he’s up in my ribs, which I don’t remember with the others.  Makes me a little nervous because we still have a LONG way to go.

The pictures below were a few of the outtakes from our gender announcement photos.  In the one on the left I told Abbie to act upset, which she didn’t want to at all.  She didn’t understand why I wanted her to act upset, so I asked her to do it for just a few and then she could cheer in the others.  Realistically, Abbie is most excited about this baby and she is very happy it’s a boy, which is interesting.  She’s been asking for a baby sister for YEARS – like since been was born – and the last month or so, she’s said she wants another baby brother.  I asked her before we went in to the gender ultrasound (both kids were with us) what she wanted the baby to be and she said boy right away.  I asked her why she wanted a boy since she already had a little brother and she said she wanted two little brothers.  Mark said she did her happy dance when the ultrasound tech told us it was a boy and she’s constantly talked about what we’ll name him and she picks out toys of hers that she wants to wrap and give to the baby when it gets here.  So the picture on the right is a better representation of how they actually feel. 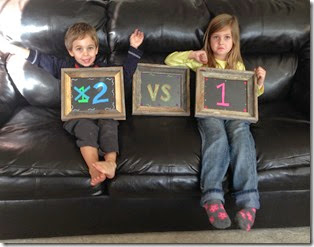 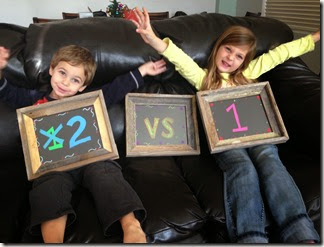 Fun, Monica! Enjoy the second half of the journey!!