I've been feeling particularly anxious about this pregnancy with the twins.  It's not at all like me to want to withhold exciting news like this from my friends, but I have been a little hesitant to tell people that I'm pregnant with twins, for fear that something happens to one of them.

Last night was a squadron coffee.  Some of the girls I'm closer to in the squadron already knew I was pregnant with twins.  I told a few more people, and then had a few people that I didn't tell approach me about it, so I know the news is traveling fast.  Which is fine, I don't really care, but it made me anxious.  The squadron commanders wife wanted to announce that I was pregnant with twins to everyone and I asked her not to because I wasn't ready for that.  A few people that knew I was pregnant asked me how things are going and I had to say that I don't really know.  I know things were great at 7.5 weeks but now it's 3 weeks later and this early in the first trimester, you really don't know.  I haven't had any cramping or bleeding, so that's a good sign, but not a guarantee that everything is fine.

She found baby A right away.  Baby A was very clear and showed up great on the ultrasound.  You could see it's little arms and legs flailing all over the place and it's heart rate was a strong 176bpm.  She mentioned something about both sacs still looking good and then she looked for baby B.  And she looked... and looked... and looked.  You could see a very faint outline occasionally of something, but it was nothing like baby A.  She kept saying she couldn't get a clear view of baby B.  She looked for the heart beat once, but couldn't find it.  After about 5-10 mins she said she wanted to try a vaginal u/s to see if she could see it better, but I had a full bladder so she couldn't see anything that way.  So she went back to prodding around on my stomach and then finally said that from what she could tell baby B stopped growing at 8w4d and she couldn't find a heartbeat.  But then she went on to say she never really got a clear shot of it and that the portable machine she was using isn't the most accurate or reliable so she wanted me to go get a second scan to confirm what she thought. 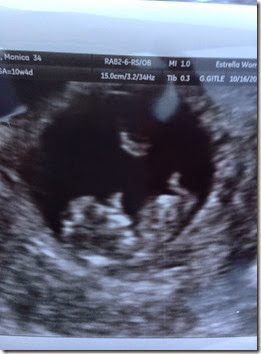 So it's been a rough day, to say the least.  The thing that is mostly throwing me for a loop is that I basically knew where both of the twins were before she even did the scan.  I swear I can feel the little baby movement flutters occasionally, and they were both right where I've been feeling them.  And I've felt baby B in the last few weeks, which doesn't match up if it stopped growing at 8w4d.  Maybe I'm hallucinating and I'm not actually feeling them.  Maybe baby A is somehow moving so much that it's making baby B move.  Maybe baby B stopped growing a lot later than she thought and she just couldn't get a good enough view of it to make an accurate estimate.  I don't know what it is, but this definitely sucks.  I go back and forth between not wanting to get my hopes up that the conclusion was wrong because I don't want to be that disappointed all over again, to wanting to hold out hope that it was wrong and that both babies are still okay.  It's kind of a fine line that I've jumped over many times in the past few hours.

My next ultrasound is tomorrow morning.  I am putting Ben in daycare for a few hours (he was with me today, running his toy car all over the table as I was laying there getting the ultrasound done) and I think Mark will be able to go with me this time.

And the irony of it all is today is October 15th - Infant and pregnancy loss awareness/remembrance day.