We told the kids about baby #3 Friday afternoon.  We sat Abbie down (while Ben wandered around near us) and showed her a picture of our most recent ultrasound.  We asked her what she thought it was a picture of and she said she thought it was a baby raccoon.  Haha!  Once she grasped the concept that it was a human baby, she was very excited.  The first thing she said was that we were going to have THREE kids, and the next thing she said was that she wanted to help feed it and she would "hold it like this and then feed it like this".  That was funny because I had just told Mark the day before that he was going to have competition for feeding the baby because Abbie LOVES babies.  Abbie is such a little mama and she tends to gravitate towards babies.  A few of my friends have babies and Abbie always tries to play with them and get them to smile or laugh.  She's very gentle and it's sweet to watch her with them.  It will be interesting to see how she deals with a baby that never leaves.  Hopefully it'll be better when she's 6 years old vs when she was 2.5 when Ben was born.  That wasn't the most fun I've ever had, but she's much more mature now so I think it'll be good.  We're going to involve her as much as we can throughout my pregnancy so she feels a sense of connection to the baby once it arrives. 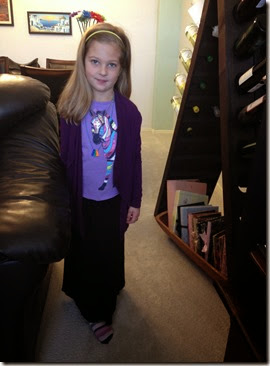 She calls this her little mommy outfit.  She is DEFINITELY a little momma.

I was at Hobby Lobby with the kids a few hours after we told them and Abbie was still bouncing off the walls.  She kept saying "I can't believe you're going to have THREE kids!  That's going to be so much work!"  Why a 5 year old is thinking about how much work 3 kids will be is beyond me, but Abbie has always been wise beyond her years.  She asked me who was going to be there when the baby comes out and I said probably just daddy will be there.  She asked where her and Ben will be and I told her probably at home with grammy and she wanted to know why they couldn't be there.  Luckily she didn't press the issue too much.

Abbie frequently will put her hands on my belly and ask when she’ll get to feel it move.  She’s full of lots of questions about everything and anything.  I’m so excited to see her interact with baby #3.  She can be a great big sister when she wants to be.