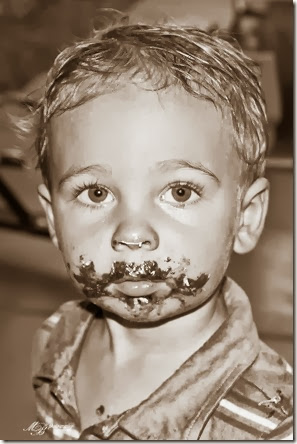 As I was looking back at pictures of Abbie for the 22 month comparison for this post, I realized that I have about 14 times more pictures of Abbie than I do of Ben.  I suppose that is bound to happen when life gets busier as you add more kids, but I’m going to try to start getting more pictures of him.  At least this month they aren’t all of him in the high chair.  =) 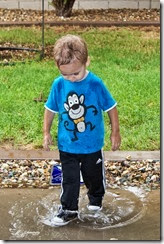 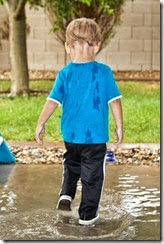 Our neighbors have a BUNCH of blow up Halloween decorations in their yard.  There is one of them that is a huge blow up skull with eyeballs that spin.  Ben LOVES looking at all the stuff!  A few weeks ago, we pulled out of our driveway the way we normally do and Ben let out this blood curdling scream.  We had no idea what the issue was at first, but then we finally figured out that he was upset that we didn’t drive by the decorations.  So we turned around and went by the house with the decorations and he was happy as a clam.  Now every time we talk about leaving and getting in the car, Ben asks MANY times, until we answer him, if we can “Go see eye-bows." or “See kitty – say hi to kitty.”.  Once you tell him yes, then he’s fine and will go get into the car.  I was surprised that he’s so obsessed with those things.  The first time he spotted them down the road, he took off at a dead sprint down the sidewalk to go check them out. 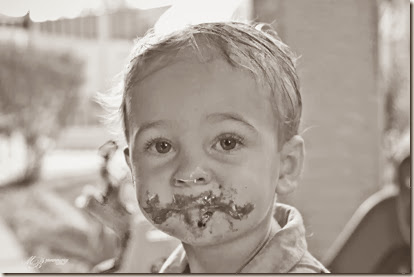 We were in Michael’s the other day, killing time while our tire was getting fixed and Mark put on this scary Halloween mask and called Ben over.  Ben was walking along when he spotted Mark and his eyebrows and shoulders dropped down a little bit, he got a funny look on his face, and his head stayed looking in Mark’s direction, but he twisted his body immediately and started walking away from him.  It was HILARIOUS.  We laughed quite a bit about that.  Then Abbie put one on while Ben watched and Mark took his off and Ben laughed about it.  He’s pretty brave! 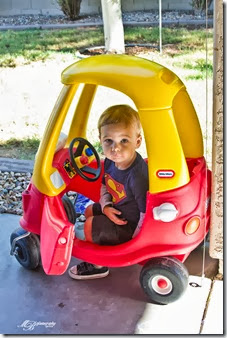 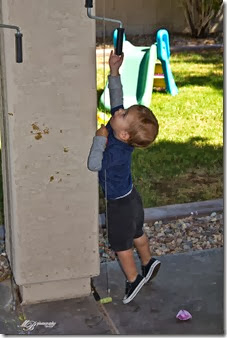 We went to a fall festival that had two big tube slides last week.  One of them was probably 15 feet high and the other one was around 25+ feet high.  Abbie was afraid to go down them.  Mark took Ben down once and he LOVED it, and then Ben wanted to go down the slides by himself, and he did quite a few time!   The little guy is fearless!  He even went down the big one all by himself!  More pictures on that in a later post. 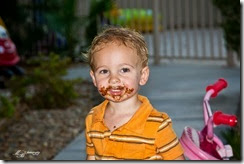 Ben has been doing a lot more screaming lately.  He gets frustrated more easily when he’s trying to do things.  I think part of that is that we’ve been really busy lately, and traveling, and that’s put him off of his sleep schedule a bit so he’s tired and whiny.  And he has a cold/cough right now too, so that doesn’t help.  Ben is starting to use inflection in his voice a little bit now, so it’s easier to figure out what he’s trying to say by how he sounds when he talks.  He LOVES his daddy and every single morning, the first thing he says when I get him up is “Daddy home?”.  If I say no, then he says “Daddy gone.”  And he does his little happy dance when Mark gets home every day where he jumps and spins in circles all at once.  It’s pretty darn cute. 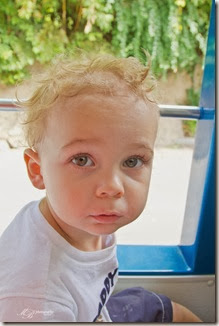 I just switched all of his clothes over to 2T’s and he’s now wearing size 7 shoes.  I have to tighten all the pants when I can because he’s so skinny, but they fit him in the length for sure.  So far, both of my kids have been tall and skinny with big feet. 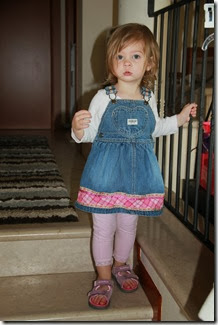 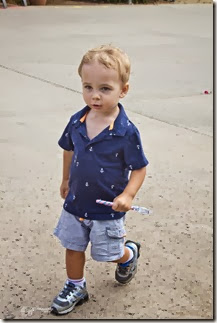 You make some downright adorable kids!