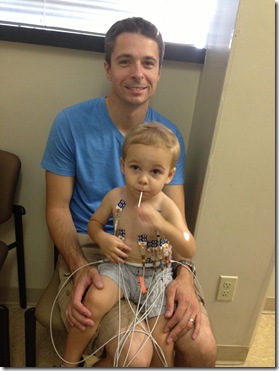 Today Ben had his 2nd cardiologist visit.  His first was here.  We were told then that he had 2 tiny holes in his heart, but that they shouldn’t cause complications.  The Italian cardiologist wanted us to come back for a re-check around 9 months old, but our pediatrician in Italy said that he didn’t hear the murmur anymore so he said we didn’t need to go back to the cardiologist.  So we never went back. 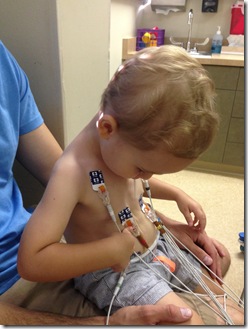 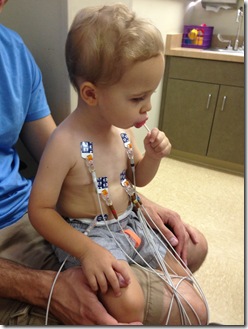 Fast forward to his 18 month well baby check up here:  his new pediatrician here said that she heard a murmur and she just wanted to make sure it wasn’t anything to be concerned about.  As I said in that blog post, I wasn’t too worried about it since he seemed perfectly healthy to me, but as time went on, my world class hypochondriac skills kicked in and I began to worry.  I would notice him breathing a tiny bit harder when he climbed to the top of the stairs, or after Mark chased him around for 20 mins and I was semi convinced that maybe something was going on with him.  It doesn’t help that I follow a few heart babies pages on FB.  All I could think about is, what if that was my baby and what if I ever have to see him hooked up to all those machines, etc. 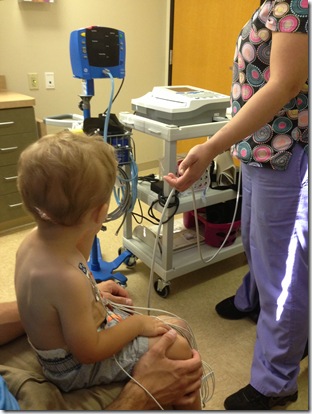 Mark was able to take the morning off of work so he could go with us to Ben’s appt, and I was very thankful for that.  I was a little worried that Ben might be a bit of a handful when they hooked him up to the EKG machine or did the echo on him, but he was PERFECT.  He just watched as they put all the stickers on his body and didn’t even freak out very much when they used the blood pressure cuff on him.  He also laid basically still the entire time they were doing the ultrasound/echo on him.  He played with one toy and ate a sucker and watched a bit of Sesame Street but he was a really, really good boy.  By the end of it he was starting to say “all done”, but he’d been laying there for 10-15 minutes by that point.   By the way, the whole time I was thinking the one with all the stickers and cords was the echo and it turns out that is the EKG and the echocardiogram is like an ultrasound of the heart basically. 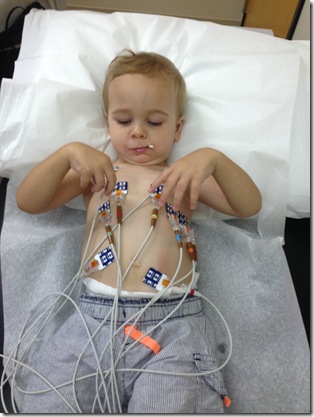 We waited FOREVER for the doctor to come in after he’d had the EKG and echo’s done.  We were all getting a little bit restless and I was starting to worry more and more thinking they found something wrong.  After having been there for over 2 hours, the doctor finally came in and he started asking us a TON of info on my pregnancy with Ben and our family histories with high blood pressure and cholesterol and other things.  I was getting more and more nervous with every question because he never said right away what was going on with Ben.  He listened to his heart for a minute and then he told us that everything is fine and there is nothing to worry about.  He said that he doesn’t have any holes in his heart any more and that he can hear a murmur mainly because of Ben’s build.  He said that Ben is so narrow and that his chest cavity is so small right now that they just have a very clear sound of the blood moving through his heart, which is what the murmur is.  As Ben gets older, the murmur sound could go away since his chest cavity will get better and he’ll put on more muscle, but he also said that if he has Mark’s lean build throughout life, that it might always be noticeable, but that it’s not his heart malfunctioning or holes in his heart. 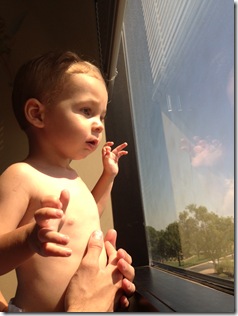 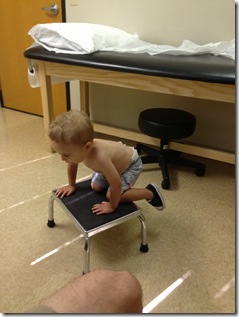 So the visit ended up being a huge relief for me.  I was beginning to feel sick to my stomach while we were waiting for the doctor to come talk to us.  I am so thankful that our kids are healthy.

That's so great to hear! Now you can feel at peace with knowing Ben is perfectly perfect.

Hey there! Nice stuff,for your very good information and feedback from you.i am really fresh to this blogs. however what you post on this site is absolutely very good and very beneficial.

Your contents are completely awesome and share worthy. I really appreciate your efforts that you put on this. Keep sharing. For more Online Cardiology Consultation related information visit Smart Telecardiology