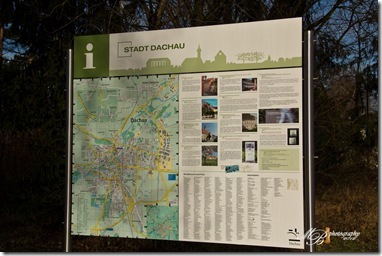 One thing Mark and I really wanted to do during our time in Europe.  I feel kind of odd, I guess, wanting to see such a morbid place, but at the same time I think it’s a very important part of world history. 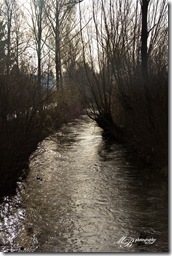 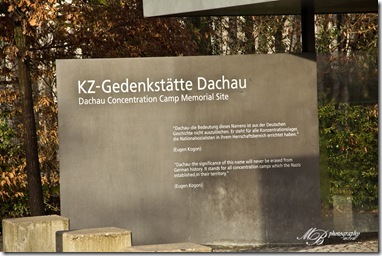 Dachau was one of the first concentration camps.  It’s located about 10 miles northwest of Munich and it opened in March of 1933.  It was in use until 1960 and held mainly political prisoners and was used as a prototype for other concentration camps built afterwards.
Guard house viewd from outside the camp. 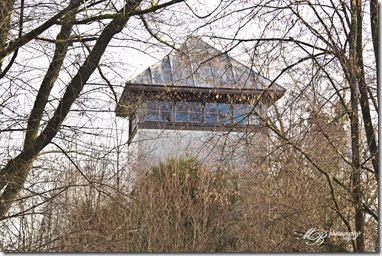 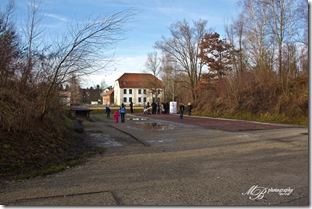 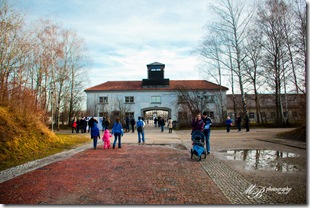 This is the entrance gate to the camp.  The translation to “Arbeit macht frei” is “Work makes you free.”  It was eerie being here, and knowing what went on on these premises.  I don’t know if it was because I was still recovering from my bout of the flu, or reading the things that these people endured or a combination of the two, but I felt nauseous most of the time we were here. 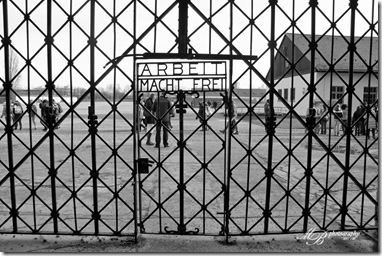 They don’t know exactly how many people stayed at this camp, but they estimate around 200,000 prisoners were kept here.  About 2/3 were political prisoners, and the other third were Jews.  31951 people are thought to have died on these grounds.  The death marches towards the end of the war were thought to have killed many people, and then even after liberation, more prisoners died due to their time at this camp. 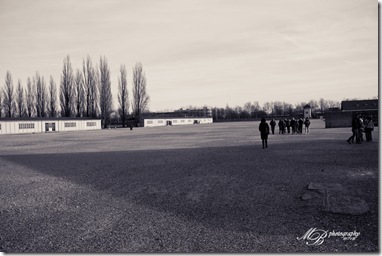 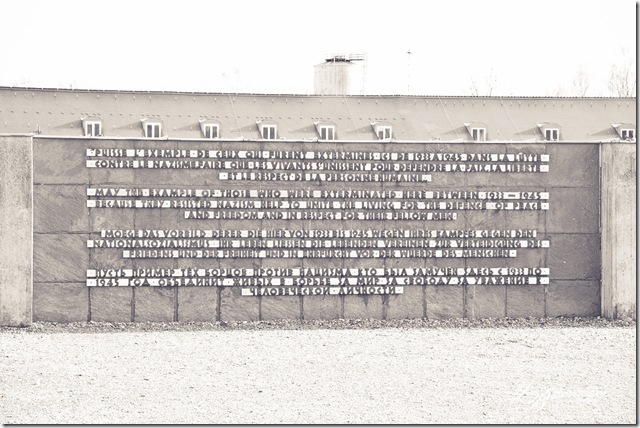 The building below is the one that now houses the museum.  It is where the prisoners were first brought when they arrived at the camp and basically made prisoners.  One of the things I remember most about walking through the museum is the pictures of the prisoners that they performed medical experiments on.  There was SO much information in there, and everywhere you looked there were paragraphs and paragraphs of things to read.  It was overwhelming, to say the least.  In a way I’m kind of glad that we had young kids with us because they kept us moving.  You easily could have spent 5 hours in there reading everything, but obviously that’s not possibly with toddlers and babies along. 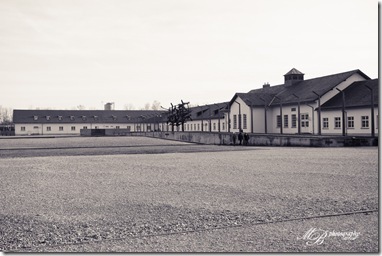 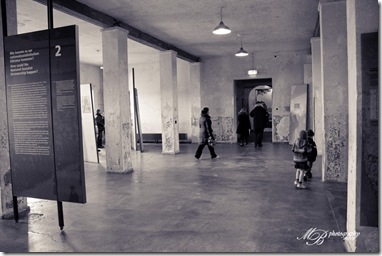 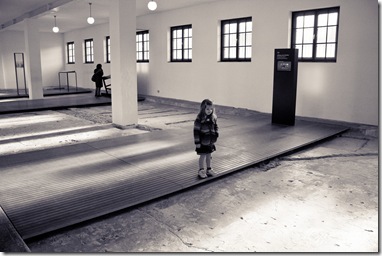 Below are the two barracks that they left standing, out of the 69 that were originally here.  It was hard to imagine just how many people were held here because now the place seems so open. 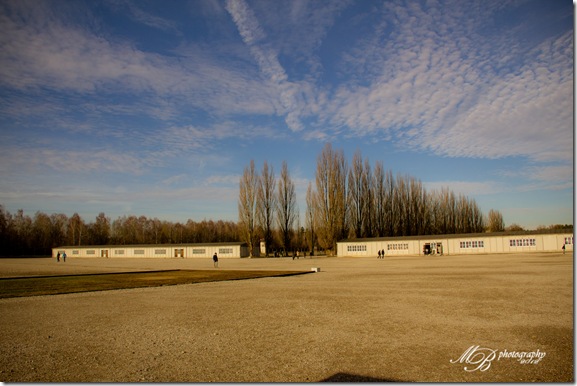 This sign below struck a cord with me.  I just don’t understand how Hitler and Himmler (one of Hitler’s side-kicks) could get that many people to do that many terrible things to other humans.  And it’s still happening to different degrees today in other countries. 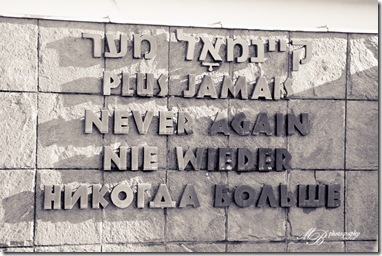 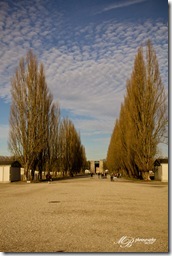 These pictures are from the barracks that the prisoners lived in.  The original ones were all torn down and then 2 were rebuilt to replicate what they had originally looked like.  Originally there were 69, including one for clergy and one for those subjected to medical experiments.  When Americans liberated this camp, they found around 32000 prisoners in 20 of these barracks.  They each contained over 1600 people, but the barracks were originally designed for 250 people. 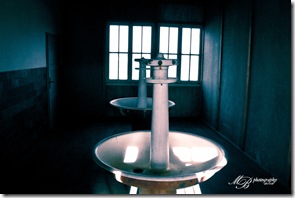 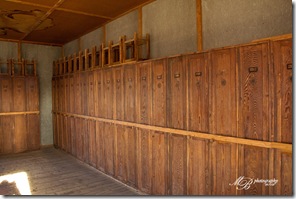 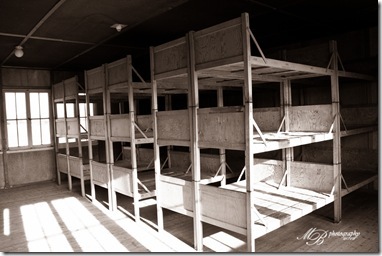 Below is what remains of most of the barracks.  They all have one stone marker for their number and that’s it.  The rest were all destroyed besides the two closest to the entrance. 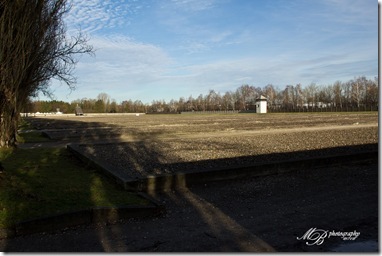 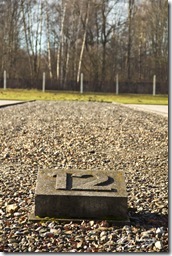 Now on the Dachau premises there are 3 chapels.  One Jewish, one Christian and one Catholic.  There’s also a Russian Orthodox chapel that I didn’t get a good picture of on the premises.  Behind three of the chapels there is now a Catholic Carmelite convent where nuns live at the camp full time and make things to sell to visitors.  We didn’t go in it, so I’m not sure what, but you can read more about the convent here. 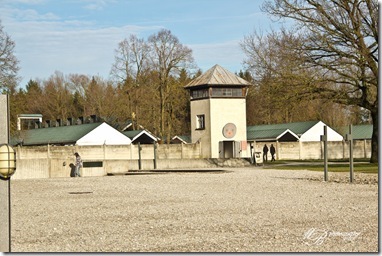 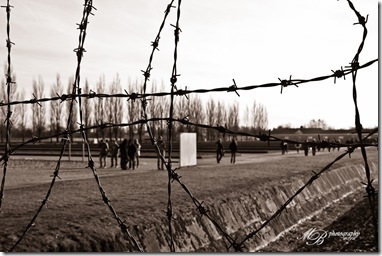 The crematorium was never used for mass extermination at Dachau.  It was used to dispose of dead bodies, but they never used it to kill people. 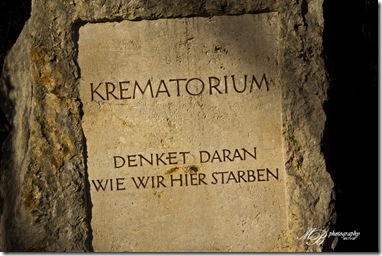 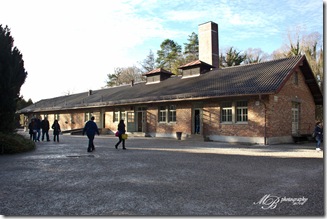 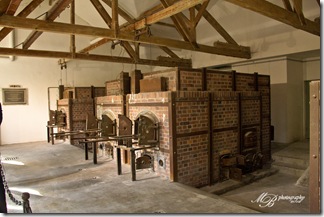 Below is a waiting room and a gas chamber, but again, it wasn’t used here.  At the time of liberation, the death rate had peaked at around 200 prisoners a day, but they were dying of diseases and starvation mostly.  Overcrowding of the camps increased the death rates also and by the end of the Holocaust, this camp was pretty full. 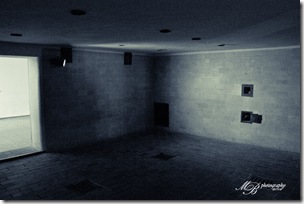 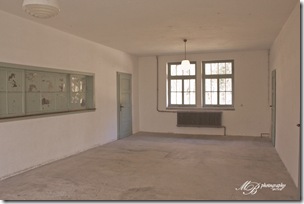 I am glad we got to go to Dachau during our time in Europe.  It was very disturbing to see the pictures and I’m not sure I’ll ever forget the pictures of all of the starving people or the ones of the medical experiments they performed on the prisoners.  I can’t wrap my mind around how sane people could do those sort of things to other human beings, or animals, or anyone really.  Maybe they weren’t sane…  If you are ever near Munich and want a really in-depth history lesson, head up to Dachau. 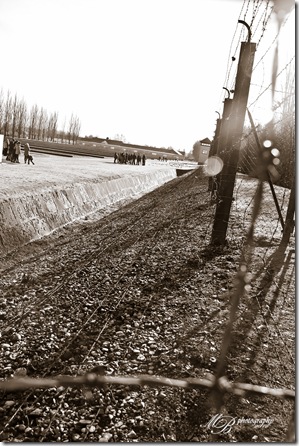 Really moving. I don't know if I'd be able to handle going there with the kids though.

Thanks for sharing. I found this very interesting. I too wonder how those people could be so brainwashed.

My grandfather was a POW at Stalag XB and was kept prisoner there for months until it was liberated. That camp was destroyed so it is interesting to see these pics and wonder if that is what it looked like for him.