I have to say, buying a house from overseas isn't the most fun experience I've ever had.  It's kind of stressful and it's a lot of work.

We have a fairly tight time line for the Stateside part of this move.  We get to Baltimore on 3/7 and fly to Phoenix on 3/8.  We're going to try to do the paperwork for the house over the weekend and close on the house on Monday 3/11.  My parents are flying in 3/10 to help us paint, work on the flooring, hang up stuff in the garage for storing, watch the kids, get settled, etc.  We have about 1100 sq ft of tile we want to rip out of the top floor and replace with carpeting.  To pay someone else to take that tile out would cost us a minimum of about $1800, but most quotes are closer to $2500/3000.  So we want to try to do that ourselves since that's obviously a lot of money.  So it'll probably take us a few days to get that tile out, and then they'll only have 5 days to get the carpet in before our stuff gets there.  In order to get the carpet in in those 5 days, most likely we're going to have to order it ahead of time and picking carpet out online is not my idea of fun.  So I don't think that's going to be possible.  And that pretty much messes up everything.

My parents are leaving on the 21st.  Their whole purpose in coming out was helping us get the house organized and all of our stuff put away.  But if we don't have the carpet in, we don't want our stuff delivered because I don't want to have to haul furniture and a zillion boxes up stairs by myself.

Mark's brother and his wife coming on the 20th, my parents leave on the 21st, Alex and Sarah leave on the 26th and then Mark's parents come April 3-10.  It's a lot going on in a short amount of time.  We're excited to see everyone, and I'm not too worried about all of our stuff not being organized for our guests.  They're all family and they'll understand, I just don't want moving in to be a month long process.

I've been busy trying to figure out how to entertain the kids on the flight back.  We got Abbie a Nabi, which is like a kid-proof iPad with all kid friendly apps.  I also got her a dry erase board with markers and a bunch of big sticker books.  I'm sure that'll keep her entertained for most of the trip.  Finding things to entertain Ben is a different story.  I found a little phone for him that makes "phone button noises" when you push the buttons on it.  He's obsessed with phones right now, so hopefully that'll entertain him for a good 5 minutes.  Haven't figured out how to entertain him for the other 11 hours and 55 mins but we'll figure it out...  =)

Things are winding up here.  Lots of last lunches with friends and starting to out process here.  15 days!!! 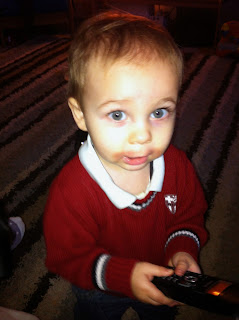 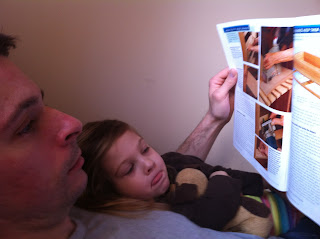 How exciting! PCSing is such a pain (I can't even imagine doing an overseas one), but I LOVE it! Starting over and getting a new home/town/area is fun!

Good luck with the flight and move!