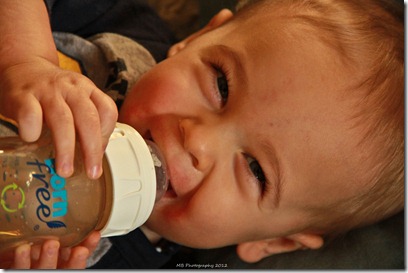 I can’t believe my baby boy is already a full year old.  It seems like just yesterday I was in the hospital worrying about him being a ginormous baby.  (He wasn’t huge – only 8lb15oz. – Abbie was bigger.)  This little man is such a good boy.  He’s the smiliest little thing ever and he’s generally very happy, unless you’re wiping his face or trying to change his diaper or being too slow in getting his food for him. 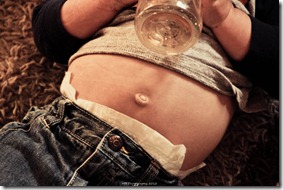 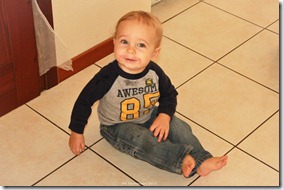 Ben is now crawling EVERYWHERE and he’s in to everything.  His favorite things to get in to are the Christmas lights hanging on the wall, any cupboards that are not locked shut, or pulling stand lights over on himself.  He has a push toy that he can stand behind and push and he LOVES to push that thing all over the place, except that he can’t turn it so he just goes straight until he runs in to something and then waits for you to reposition him so he can go again.  He pulls himself up on the couch and cruises along anything he can hang on to.  He’s managed to get up on the bottom step twice now and as I write this, he’s working on a third time.  He’s so tall, he can reach on top of our TV trays that we have in our living room and grab things off of them very easily, mostly remotes, markers, or any sort of paper than he can shred. 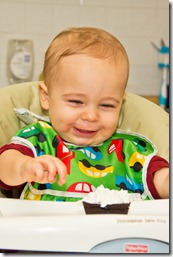 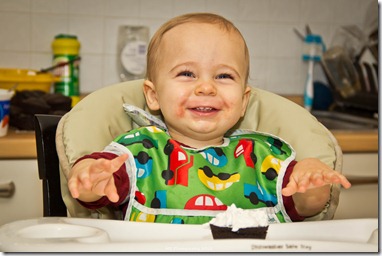 He’s a super tall boy.  At his appointment on Dec 12, he weighed 23.81lbs (63%), he was 32 inches tall (96%) and his head circumference was just under 19in (90%).  (At one year, Abbie was 21.11lbs, 31.5” long and her head was 16.5”.- although I just noticed on the blog it said it was 42 inches.  Haha!  Oops, that’s supposed to be cm.)  On his first birthday he started having a bit of separation anxiety and cried when we put him to bed at night.  That lasted about a week, and then he got over it, and him crying for 5-10 minutes was NOTHING compared to Abbie’s 2-3 hours.  I don’t know if it’s because he’s not our first child and we know what we’re doing with him more than we did with Abbie, or if it’s their extreme personality differences, or a combination of the two, but Ben is such an easy baby.  He’s getting to his “into EVERYTHING” phase, but he doesn’t throw fits like Abbie used to if you take something away from him or redirect him.  He’s such a “chill” little boy.  He was sick with a cold, congestion and a cough for 2 or so weeks and he wasn’t himself at all.  He was very subdued for that whole time – didn’t interact with much, barely smiled, kind of stared off into no where a lot.  I was pretty worried about him showing signs of autism, especially since this started up after I got him 2 of his 6-7 shots he needs at a year (even though I know that’s not true that shots cause autism, I can’t help it, I still worry), but he’s completely back to normal now that he feels better and is very interactive and smiley again. 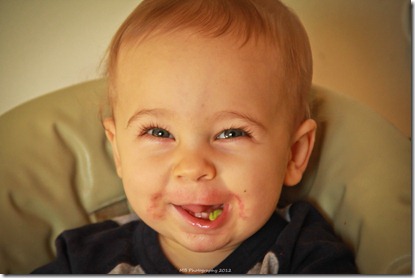 Ben doesn’t seem to be too interested in baby food any more.  He’ll eat it, especially if I warm it up for him, but he mainly likes to eat whatever we’re eating.  Since he has a whole mouth full of teeth, I give him little bits of whatever we’re eating and most of the time he eats more than Abbie does.  He probably gets between 16-20 ounces of formula/ organic whole milk a day.  We’ve been mixing the formula with the organic milk for a week or so now, and he seems to be doing fine with that, although he prefers it to be warmed up a little.  He likes to hold his own bottles and sippy cups and he’s finally learning to tip the cups up and put his head back to get the liquids out. 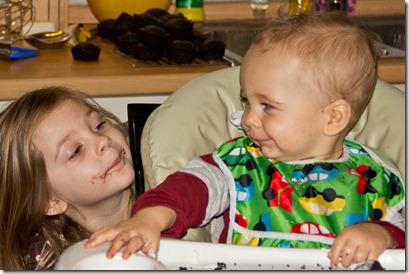 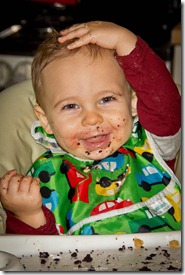 Ben does a lot of really cute baby babbling now.  He inconsistently says mama and dada and sometimes he says baba (for bye bye).  He signs milk, more, all done and waves bye bye.  He knows where his tongue is and sticks it out when you ask him to and we’re working on pointing to his belly and ears now.  I think he’s getting ready to get rid of his morning nap, although sometimes when we’re home, he’ll sleep for 30-60 minutes, but not often.  And honestly, we’re usually not home.  I try to be home before 2pm every day though, to get him down for his afternoon nap (and Abbie too) and he’ll usually sleep from 2pm to about 5 or 5:30.  He goes to bed between 8:30-9pm and he’ll generally sleep until 8:30am, but I usually have to get him up earlier than that to get Abbie to school. 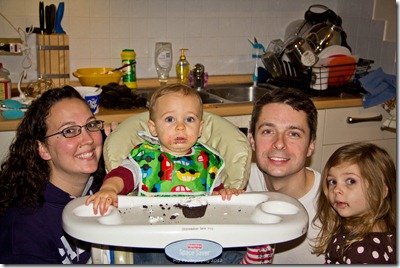 Ben still loves to be outside.  He usually laughs and claps the whole time we’re walking from the car to a store.  My friend, Jennifer, got him this little toy woodworking set for his birthday, and one of the settings on it plays music and he LOVES dancing to music.  He bounces and claps and bangs his head and wiggles all over the place when he hears music.  If he’s ever unhappy, he turn on music for him and he cheers up right away. 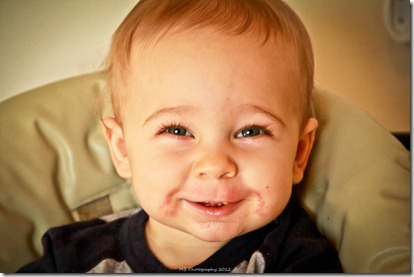 We love you so much, bubba.  Happy first birthday to our favorite little boy. 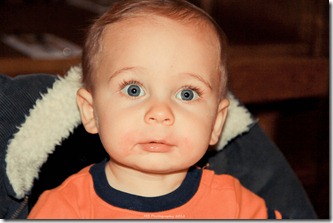 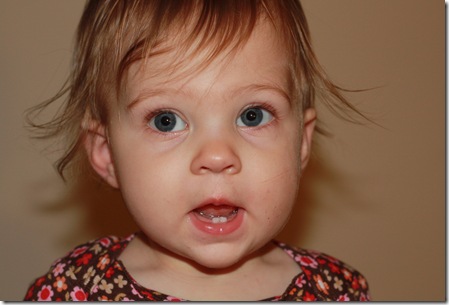 He's adorable. I almost cannot believe he's one. Time moves much too quickly.

I hope you have/had a merry Christmas!