We left Rome on Thursday to head down to the Amalfi Coast.  We had some amazing view of Mt. Vesuvius on the drive down. 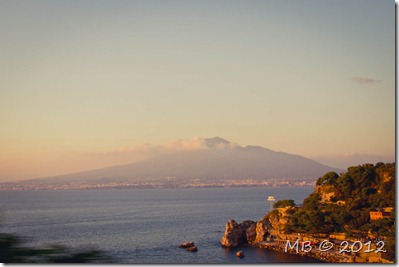 Our GPS software is from 2008, so apparently a lot has changed in European roads in the past 4 years.  So our GPS took us straight through downtown Meta, and it was crazy.  It is very much true that the further south you get in Italy, the more crazy the drivers are.  And the very narrow, very windy roads don’t help much either.  There were scooters EVERYWHERE, and the scooters in Italy apparently aren’t required to follow any normal road rules.  They go pretty much anywhere they want without much regard for anything or anyone else.  And we were SHOCKED to see entire families on one single scooter.  No joke!  The dad would be driving, usually with the older kid standing in front of him between his legs, and the mom would be on the back either with a kid in between them or holding one off the side.  It was insane.  Oh, and the parents would have helmets on, but the kids wouldn’t.  You can get ticketed in Italy for not having your DOGS behind a barrier in the back, or being tied in the back seat somehow, but I guess it’s completely acceptable to have a family of 4 on a tiny scooter.  This country never ceases to amaze me. 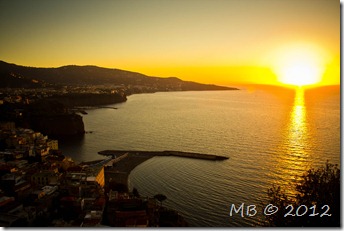 We had most of Friday to ourselves since Mark’s family wasn’t going to join us until that evening, so we decided to head to Positano, since I’d heard from a few friends that it was pretty.

The villa we rented 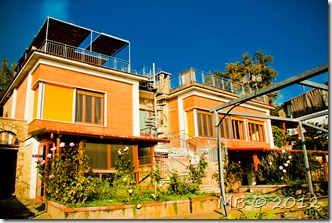 We stayed in Piano di Sorrento, which was in between Sorrento and Positano, right along the scenic coastal way.  The views along this road did not disappoint at all.  It was gorgeous, but it was also fairly narrow and REALLY windy.  If you get car sick at all, this probably isn’t the road for you. 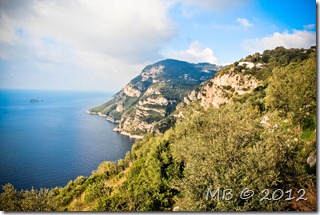 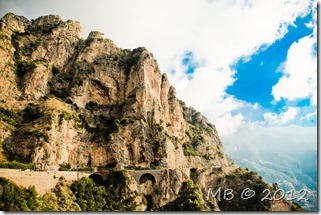 We drove our new(ish) SUV on this trip, mainly because all our junk wouldn’t fit into our sedan, but it was a little bit nerve wracking having that thing on these narrow roads.  There were MANY times that we had to pull in the mirrors because we only had inches of clearance on either side of the car.  And there were buses on these roads too.  You couldn’t pay me to drive a bus through these towns.  I honestly don’t know how they made it sometimes.

Positano was my favorite of the places we saw on the Amalfi Coast.  We wanted to find some place to eat breakfast so we parked the car and then realized we still had a LONG way to walk to get to the touristy area of the town.  However, we did find a tiny grocery store, so we grabbed a few things to eat and drink and then headed back up the hill a park to eat our breakfast.  I wish I had taken a picture inside the grocery store.  It was basically one tiny room, maybe a little bit bigger than our living room, but they had a little bit of everything.  And they had mini child-sized carts to use.  It was cute. 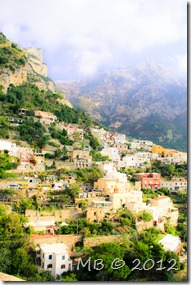 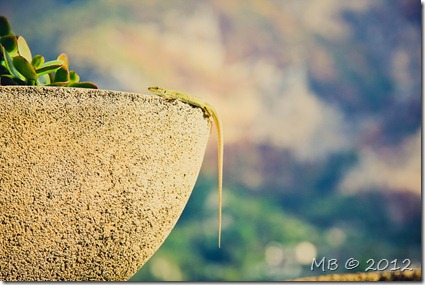 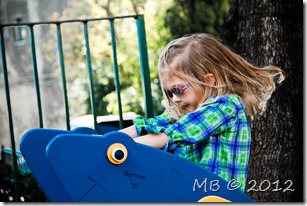 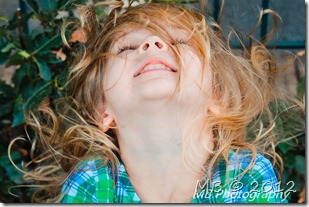 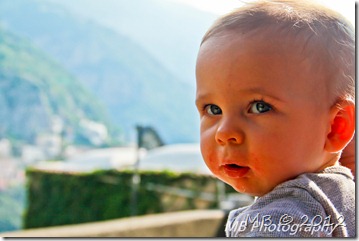 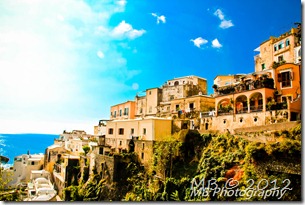 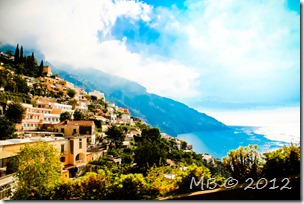 We got back in the car after breakfast to head further in to the town.  We found a parking garage closer to the touristy area so we parked there and walked the rest of the way down to the beach.  The views of the town from the beach were gorgeous. 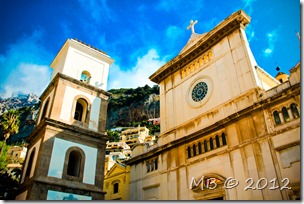 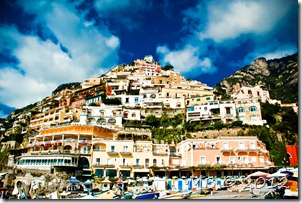 We wandered around the little beach for a little bit.  Abbie and Mark looked at the water, and I took a picture of Ben to prove he was there also.  We sat by the beach and let Abbie run around and play in the sand and we talked to a nice lady from Brooklyn for a while.  She gave us her business card and told us to call her if we ever came to NYC to visit. 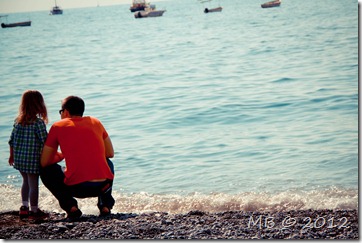 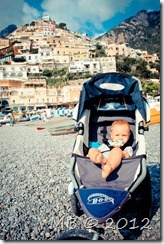 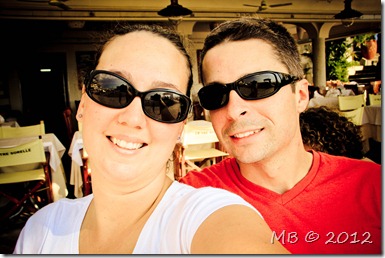 Ben was not a big fan of the sand, but he loved watch Abbie run around like crazy. 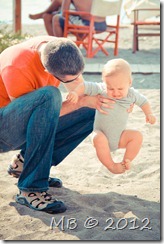 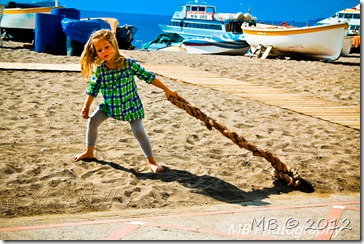 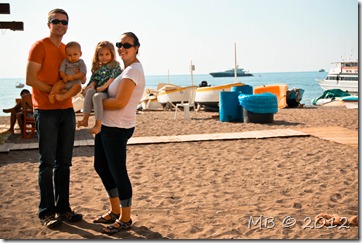 We had lunch right by the water after Abbie’s playtime.  Again the views were gorgeous and the food wasn’t too bad either. 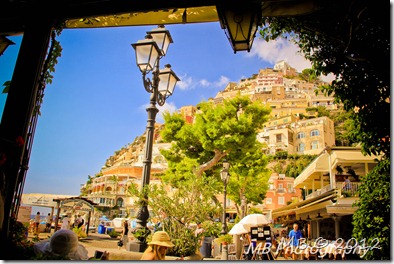 After lunch we headed back to the apartment for naps and to wait for Mark’s family to arrive.  Ben didn’t quite make it back to the car before he fell asleep. 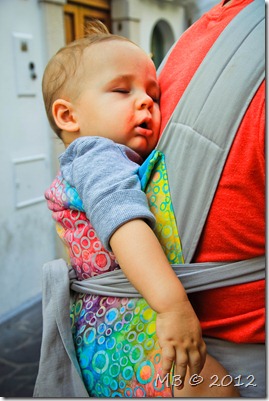 Oh gosh it looks lovely! and it makes me think of "Under a Tuscan Sun" movie!

So gorgeous! Once again I am AMAZED that you guys are able to do all this sightseeing with the kids in tow, especially since most of Europe isn't baby friendly!