Lately I have been a bit antsy.  I feel unsettled, and I know exactly why.  I’m ready to go home.

Don’t get me wrong, I have loved the opportunity to live in Italy, and I am very thankful for our time here.  But I am over the novelty of it, and I’m missing the comforts of home.  I know that part of this is because the end is in sight now.  Mark has to turn his dream sheet (list of jobs that he’d like to do next, which would narrow down where we could possibly be sent next) in the next month, and then we should find out where we’re headed next in November or December.  So I’m getting antsy to know where we’re headed next for sure.  I’m a planner and I’m ready to start planning our next adventure.

A BIG reason I’m very ready to move back to the States is because of our house.  I’m tired of it.  It is WAY too small for us.  It would probably be just right if it were just Mark and me, but with 2 kids and 2 dogs in the mix also, it’s just tiny.  Abbie’s room is right by the living room, and she FLIPS out if her bedroom door is closed all the way.  Plus it is way too hot in both of their rooms with the door closed since the one A/C unit is in the hallway outside both of their doors.  (No central A/C in Italy.)  I close Ben’s door at night so he can sleep better and won’t wake Abbie up, but his room gets to 81-82 degrees at night when the door is closed. (His monitor tells me the temp in their rooms.)  Anyway, so we put Abbie to bed around 9-9:30pm and she’s often times still up at 11pm when we’re going to bed if we stay downstairs.   Lately we’ve been staying in the living room to watch the Olympics, but if we’re downstairs, she can easily hear us and it keeps her up.  It’s just annoying.

And my kitchen is TINY.  I am SO tired of having one tiny counter to do all my cooking on.  I love to cook, but I just don’t have the space here.  Here is the extent of my counter space. 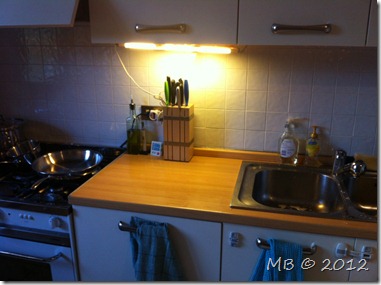 Mark just bought me an awesome set of stainless steels pots and pans and I have no place to put them since you’re not supposed to stack them.  I kept all the cardboard they came with, so I have some of them stacked in my cabinet with cardboard in between them, but the rest of them are permanently on my stove, since I don’t have any other place for them.  I wanted to get one of those hanging racks for them, but since the ceilings and walls here are concrete, I’m afraid the screws will come out of the wall if I try to hang it.  (You can see some of my new set on the stove.)  But this is my entire kitchen.  I am SO ready to get in to a normal sized American kitchen, with enough storage for my kitchen things, or studs in the walls/ceiling so I can hang my pots. 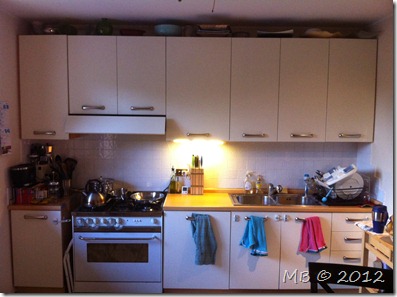 The babysitter situation over here is ridiculous.  I’ve been taking Abbie to a sitter over here for almost 2 years, but she’s done some things lately that have made me not want to continue taking her there.  Abbie is going to start going to the asilo (Italian preschool) in mid-September anyway and I don’t want to pay someone 5E ($6.20) per hour to keep Ben when he just sleeps half the time.  So I’m going to try to find someone to be my regular night time babysitter for squadron events and date nights since our current one is moving this month, and also watch Ben at my house 2 days per week for a couple hours while Abbie is at school.  I’ve been interviewing people for the past few days.  Today one called me 10 mins before her interview telling me she’d be late and then never showed up or called, and then the other one spoke VERY little English.  I asked if she knew CPR or first aid and she had NO clue what I was saying, and I honestly had no clue what she was saying either.  Things are just 15 times easier in the States.

Abbie needs some new clothes and shoes and I’m having to have her Grandma’s get her things since I don’t have access to the good cheap stores like Ross, TJ Maxx, Marshall’s, Tuesday Morning, etc.  Shopping online isn’t nearly as fun as shopping in person, and it’s hard to shoe shop for her online also.

The good news is that we’ll see both of our parents in October.  Mark’s parents are coming over early October for Mark’s brother’s ordination in Rome, and my parents are coming at the end of October to go to Ireland with us.  I am really excited.  And it will be nice when Mark’s brother gets back to Rome also.  It is nice when he’s in the country and hopefully we’ll get to see him a few times before we move.

As I said, I am thankful for our time here in Italy and all the friends we’ve made and the places we’ve seen, but home is calling my name.