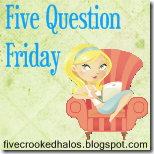 1. What is a must in a hotel room?  A bed.  And a toilet.  Which is important when you’re in Europe because they’re all about sharing restrooms which is not my cup of tea at all.  I don’t like to wander down a hallway in the middle of the night when I have to pee, trying to find a bathroom.  And now that our little Pippers likes to swim, a pool in the immediate vicinity is always nice too, but preferably not RIGHT in front of the room because then it turns in to a battle to get her to go in to the room and not to the pool every time she sees it.

2. Which Olympic event would you be best at?  Well to be precise, none of them.  In my little dream world, I would love to say equestrian eventing, but the biggest fence I’ve ever jumped on a horse was under 4 feet tall, and the fences they jump are like 6+ feet tall.  And I haven’t really ridden a horse, like SERIOUSLY ridden, not just a trail ride, in about 5 years.  So my skills are probably lacking non-existent.  And to be honest, jumping tiny little ditches and stuff in cross-country scared me a little bit.  It was thrilling and all when you actually stayed on, but seeing the jumps that they have to do on that Olympic cross-country course?  Yeah, I’d be scared ****less on those, which means the horse wouldn’t jump anything and I would land on my head.  So all of that to say, maybe I would be good at archery.

3. What's your stance on the Chick-fil-A subject?  I could, and might, write an entire blog post on just this one question, but to try to sum it up, I think people in general need to lighten up.  America is a great country because we are able to have differing opinions on MANY subjects.  The man was asked a direct question and he answered it honestly.  Just because you or I don’t agree with his answer doesn’t make his opinion wrong.  It’s just that, his opinion and everyone is entitled to one.  He’s not forcing his believes on anyone else, he wasn’t protesting anything.  He was simply asked a question and he answered it and because he’s a big wig of a company, the media is attacking him.  I happen to not agree with his opinion, but I will not boycott his company just because he doesn’t have the same beliefs/opinions that I do.  Americans seem to be all about extremes lately and that’s what gets people and countries in to trouble.  If we can just accept that not every single person is going to have the exact same beliefs that we do, but to still treat that person with the kindness and respect that they deserve, I think we’d be a happier bunch in general.  And I think the media is to blame for a lot of it because they have a way of blowing things out of proportion.

4. One thing you said you'd never do as a parent, but totally have.  Co-sleep.  I swore up and down, left and right that I would not have a baby in my bed, until my oldest was born and would NOT sleep unless she was right next to me.  I held her in my arms, in a CHAIR for 2 months after she was born because any time I put her down she would wake up and SCREAM and I couldn’t take it any more.  So I brought her to bed with me and what do you know, she slept 8 hours straight.  We only did it for a few months with her, but it was a necessity.  I could not go on any longer sleeping in a chair for 1-2 hour stretches at a time.  And now I know to never say never.

5. What's the weirdest thing you've ever found at a yard sale?  Yard sales aren’t really my thing, so I haven’t seen anything too weird that I remember.  My mom could probably answer this a lot better than I could though since she’s a professional garage saler.

Have a GREAT weekend!!

New follower - thanks for coming by my blog and commenting! happy friday!

Europe hotels are interesting, aren't they? When I went there, the hotels alone were a little culture shock!