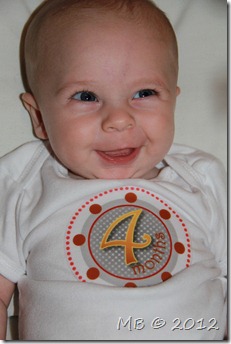 On Easter Sunday Ben turned 4 months old.  Unfortunately the little dude is sick, again.  He got sick 3 weeks ago on the plane to the States, got better for a little bit, but now he’s back to coughing and sneezing and has a runny nose.  Poor little guy.  I took him to the doctor yesterday just to make sure that it was just a cold like I suspected, and it was.  His lungs sounded good and the doctor said to just let it run it’s course. 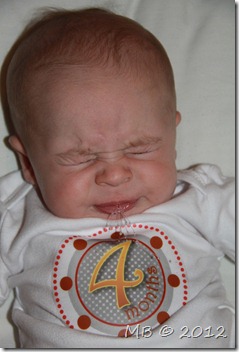 Ben is wearing 3-6 month clothes and size 2 diapers.  He’s starting to drink 6 ounces during some feedings but usually drinks closer to 4.  He’s shown us the signs of being ready to start solids, so we’ve started giving him a little bit, but I’ll write more on that in a different post. 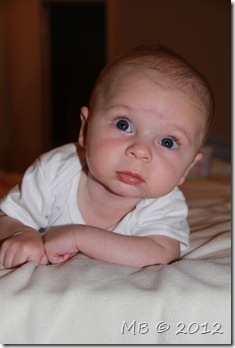 Ben is a pretty good natured little guy.  He’s happiest in someone’s arms (mostly mine), facing out.  He loves to stand up though and any time you put him on his feet, he locks his legs and stands there supporting himself.  He likes to look at himself in the mirror and he’s discovered his hands and feet this month.  He will actually grab his toys to bring them to his mouth to chew on now and he likes to grab his feet also.  He pretty much hates his car seat and gets fussy any time we put him in it.  I think he gets hot in it and he doesn’t like staring at the back of the seat in car rides.  Abbie was the same way.  He’s not a big fan of tummy time and has rolled over a few times, but nothing consistently, and he doesn’t roll from back to front yet.  He loves his baths and he usually likes to ride in the stroller as long as it’s moving.  He’s so good in the stroller sometimes I think he’s fallen asleep, but he normally doesn’t.  He just chills out and enjoys the ride. 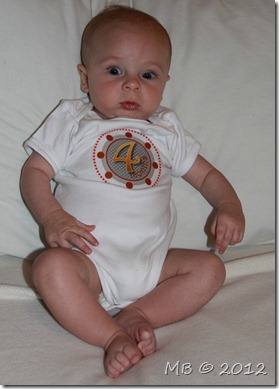 When I had Ben at the doctors on Monday, he weighed 13lbs13oz with his diaper on and a onesie on, and he was 25” long, so he’s still gaining weight.  Three weeks ago he weighed 12lb8oz, so he’s up around another pound.  He’s a very observant baby.  He will study things and he loves to watch people and will watch people walk by.  We’ve had quite a few strangers comment about how they’re amazed by how he watches things so closely.  Abbie was similar when she was younger.  She was always studying things, but Abbie was very serious most of the time and Ben gives smiles much more freely than Abbie did. 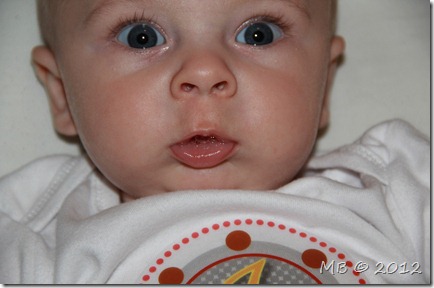 As usual, our biggest issue is sleep.  Lately Ben has been waking up at LEAST 4 times a night, sometimes as much as 10.  It is exhausting and I just don’t know what to do to get him to sleep for longer stretches at night.  He’s not hungry because he’ll drink an ounce and be out again, but then wakes up an hour later.  We try to get him to bed around 9:30pm and he’ll usually fuss a time or two between then and 1am.  He’s up screaming usually at 1am, 2am and then around 4am.  When he wakes up at 5am, I usually will feed him 4 ounces if I haven’t done it previously and then he usually gets 4 more ounces around 8am.  But last night he was up more than every hour and it’s just exhausting and frustrating, especially since he wants to take these marathon naps during the day.  I wake him up after he’s slept for 2 hours during a nap and he gets SO mad and cries and cries until I put him down to sleep again.  It wouldn’t be so bad if we weren’t sharing a room with him right now, but we are and will be for the next month and a half.  Every noise he makes wakes me up and I can tell when he’s waking up and getting ready to cry, so then I just lay there and wait for it.  It will be nice for him to be in his own room and actually be sleeping through the night.  I’m sure I’ll get him sleeping through the night while we’re here and then we’ll go home and go back 7 time zones and have to start all over again.  Oh well.  His cuteness ALMOST makes up for it.  =)  It’s hard to stay mad at this face for too long, no matter how sleep deprived I am. 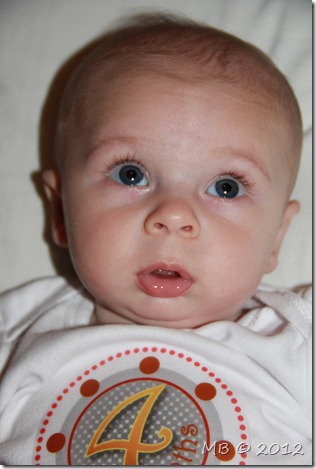 Oh my goodness! He is starting to look a lot like his sister!

We finally figured out how to get Callie to stop freaking out in the carseat while in the car! Roll down the windows! No joke once we get some air in there she IMMEDIATELY quiets down and half the time passes out. It's crazy!

And we are right there with the sleep issue. I guess I could only get lucky with one good sleeper! LOL

Can't believe he is 4 months already. He is so cute. So excited to see everyone in a couple weeks.

Oh my gosh!! Those are the cutest pictures!