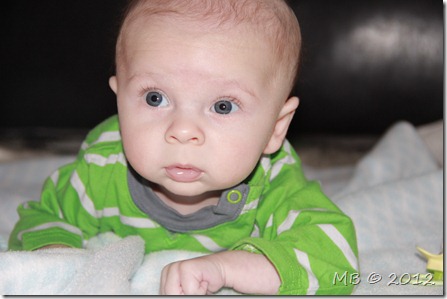 Ben had his follow up appointment today (3/20/12) from his echocardiogram.  They didn’t tell us anything new.  The doctor was just going over the results, which I already knew.  I was excited to see what he weighed though.  He’s now up to 12lbs 8oz and he’s 63cm long, which is just under 25”.  So he’s gained 3lbs and 3oz since his 2 month appointment which was 6 weeks ago.  That is a LOT for a little guy so he’s back on track with his weight now.  He’s also grown 2 inches longer in 6 weeks and gained 3cm in his head circumference.

Ben has discovered his hands.  He chews on them and is reaching for things to put in his mouth.  He hangs on to his bottles now also.

I’ll update you more at his 4 month update, but I wanted to tell you what he was at at his last appt.  More blogs are coming, I promise.  I just haven’t had the time to blog much lately, but things are settling down now!