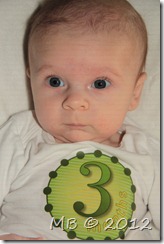 Just in the past week Ben has started laughing, which is SO much fun.  He’s quite the ticklish little guy apparently.  And even better, Mark was right there the first time he laughed and we got it on video!  He also just rolled over from front to back for the 2nd time.  He did it the first time when he was around a month old, but he was really mad and I think he surprised himself.  This time I watched him work at it and he just gracefully rolled over to his back and started smiling at me. 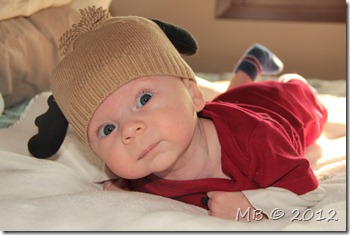 Also this week I switched Ben’s wardrobe over to his 3-6 month clothes and I’m packing up all his 0-3 month clothes for storage.  He still fits into the 0-3’s, although the pants any every outfit are more like capris because he’s so long.  Some of them are getting a little tight in the crotch (meaning his torso is getting too long) but he’s definitely not going to outgrow anything width-wise.  Neither of my kids have to worry about that though.  They’re both long and thin.  He’s still in size 1 diapers and I switch between Pampers and Huggies. 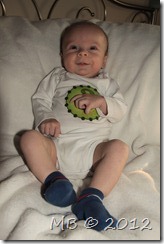 Ben basically has 3 states.  He’s either screaming, sleeping or smiling.  He doesn’t sleep very well at night still, but I attribute that to me not doing any sort of sleep training with him yet, and he’s still in our room.  He starts out in his bassinet and then usually wakes up around 1am and I put the paci back in his mouth a few times before I bring him to bed with me around 3-4am.  Sometimes I feed him 4oz’s then, other times I try to get him to hold off until 7-7:30am.  He goes to bed around 10:30pm most nights and is up 3-6 times throughout the night and is usually up for good by 8:30am.  He usually takes a short nap or two in the morning, a big nap in the afternoon from 2-5pm and then another short nap around 7:30pm.  I’m still swaddling him, but I might try to not swaddle him to see if he likes that better.  Sometimes he gets pretty crabby when I swaddle him, but he seems to sleep better/longer when he’s swaddled. 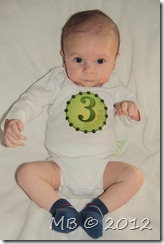 He eats a LOT.  The boy definitely has a good appetite.  He eats at least every 2 hours when he’s awake and he’ll eat between 3.5 – 5oz each time.  I’m trying to pump 3 times a day, but I really just don’t have the time to do it.  Normally while I’m trying to pump I’m also trying to answer Abbie’s billion questions or take care of Ben at the same time, so I can’t relax enough to have a really good letdown and it’s killing my supply.  I get 2 oz out in 20 mins if I’m lucky.  Sometimes in the morning I can get 3.5oz out, but pumping in the morning is a huge hassle and I have to get up 40-50 mins earlier than normal to pump and feed Ben in order to get out the door on time.  And when you’re up 3-6 times in the middle of the night, those 40-50 mins count a lot!  He’s still having the seedy, breastfed poops though, so I know what I am giving him is doing him good, I’m just not sure how long I can keep it up. 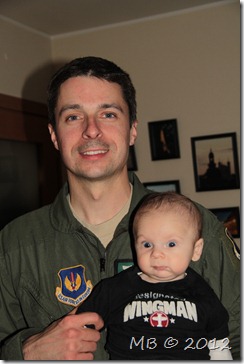 My little guy is SUPER smiley.  He’s so cute!  All you have to do is look at him and smile and he gets this huge grin on his face.  He coos a lot and if you talk to him he’ll “talk” back at you, which is fun.  He’s definitely a mama’s boy already.  There are some instances where Mark is doing everything and anything to get Ben to stop crying and nothing is working and as soon as I take Ben from him, he quiets down and goes to sleep.  But he also sleeps in my arms every night so that probably doesn’t help.  We’re trying to get away from swaddling him and we’ve tried it the past few nights because he gets so mad when we put him in the swaddle thing, but if he’s not in it, he wakes up a LOT at night and his little arms are flinging all over the place. 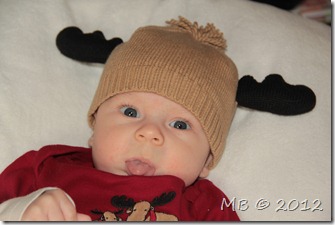 I feel like I finally have a better handle on parenting two kids.  Ben is getting a little bit easier, and I think he’d be a lot easier if it wasn’t for the fact that I have to pump and then feed him bottles.  That’s really time consuming and stressful for me to try to fit in to my day, especially since it usually cuts in to my sleep/nap time.  He’s a fun little guy though, and as far as I can tell right now, he and Abbie are almost exact opposites in many aspects. 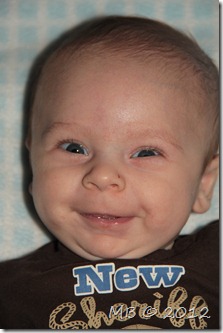