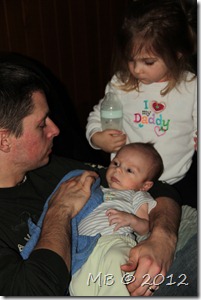 Mark is home and we are all pretty excited about that.  He surprised Abbie Sunday morning when we went in to get her up.  (I hadn’t told her he was coming home.)  She was pretty stunned and it was fun to see her reaction.  And of course, she’s been Mark’s little shadow since he’s been back. 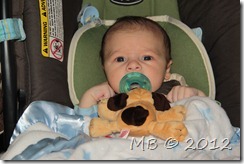 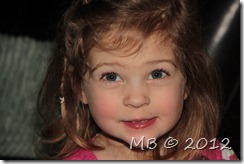 Ben had changed a bit in the 2 weeks Mark was gone and Mark commented on how skinny he looks now, which completely freaks me out.  Luckily we have his 2 month appointment this week so I’ll be able to see what his pediatrician says, but now I am worried about it.  As much as I would love to have chunky, roley-poley babies, I don’t.  I have long, skinny babies (that tend to cry a LOT in their first few months of life, which is another thing I’m going to ask his doctor about).  But Mark is 6’3 and very lean and I’m almost 5’9 (and currently not at all lean), so I guess it makes sense that our kids are built the way they’re built.  I’m just excited to go to his appointment to get my questions answered. 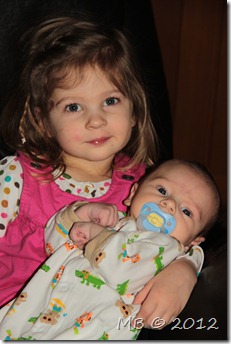 This week is also our AOCSC (Aviano Officer and Civilian Spouse’s Club) (you never run out of acronyms around the military, that’s for sure) is having their bingo night.  I’m super excited about that because it’s fun to play bingo and you get to win some really neat prizes!!  Plus I’m going to send Ben home with Mark after Mark gets off work, which will be my first time not being in the same dwelling as Ben.  It’s hard to play bingo while taking care of a baby though!  Hopefully he’ll be a good boy for Mark. 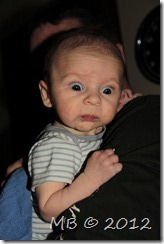 Hopefully I’ll be able to keep up with my blog a little more now that Mark’s home, even if he won’t be much help.  I only had 11 blog posts for January, which isn’t very much at all for me!  I miss blogging when I don’t do it.  I haven’t been taking very many pictures lately though either, which also bothers me.  Just today I finally got a picture of Ben smiling with my dSLR because Mark was holding him.  I’m too close to him when I hold him to use my big camera to capture his smile, so all the previous pictures have been with my iPhone, which isn’t the best quality, but it’s better than nothing.  So I need to start taking more pictures of the kids also.  It’ll be nice when I can take them outside for pictures, but it’s been ridiculously cold here lately, so we’ve been staying inside a lot!  Hopefully it warms up soon!

That last picture of Ben is just adorable. They look so stinking alike! Glad to hear you are regaining some "sanity" for lack of better word. :)

His face is too cute! Ellie was majorly fussy and when we got stateside the Dr. recommended formula by similac called allimentenm it has worked like a charm.