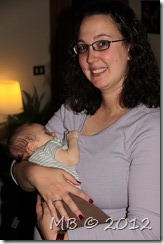 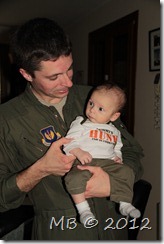 I took Ben to his 2 month appointment today.  I had a list of questions that I wanted to ask his pediatrician, but it turns out his normal ped. is gone, so he had his appointment with some other fill in guy that I wasn’t very impressed with at all.  I really wanted to talk to the pediatrician that saw him for his 2 week appointment and saw him after he was born, and she’s also Abbie’s doctor.  So the appointment started out bad, right from the start and only got worse from there. 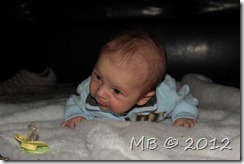 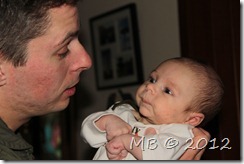 The good news is that Ben is on track physically and developmentally.  He’s doing everything a 2 month old should do – smiling, cooing, responding to voices, turning his head, holding his head steadier and lifting it up when he’s on his tummy.  His heart and lungs sounded good, ears looked good, belly sounded good.  The doctor did that stretchy test on him where they move his legs around and that was fine.  (I still don’t know what exactly they’re looking for when they do that.)
The bad news is that he weighed 9lbs 5oz.  ….  So essentially he’s gained 6 oz in 2 months, which isn’t good at all.  And what makes me worry even more is that when Brittany and I weighed him when he was a month old, he weighed 10lbs 1oz with his clothes on.  So he was just in his diaper this time, but still – his clothes don’t weight that much, so he’s lost weight in the last month.  This weekend when Mark and I weighed him on our digital scale he was weighing around 10.4lbs with his clothes on, so apparently he’s even lost weight since this weekend because when we got home from the doctor I weighed him with his clothes on and he was 9.8lbs.  I’m not sure why he’s lost half a pound in the past few days  Needless to say, I kinda freaked out and I had a whole list of things to ask and after I saw his weight, none of them seemed important anymore.
The doctor was very “relaxed” about it all though.  He said that he thought we should do a weight check in 2 weeks to see where he’s at, and I said I didn’t want to wait that long, so he said that we could do them every week.  He said that he looks good with everything else and that his temperature was good.  I asked him how he knew his temperature was good and he was surprised that the tech hadn’t taken his temp.  ???  So he took it and it was 97.3…  Is that good?  I also showed him Ben’s diaper, which has been having peachy colored spots in his pee diapers occasionally, and this time all of the urine was that color and he said that it shows that Ben is dehydrated and his pee is really concentrated, but again, he wasn’t all that worried about it. 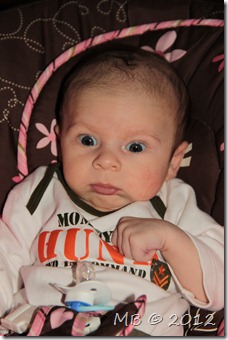 Normally Ben has been sleeping from around 10:30pm (between 10:15 – 11:15pm actually), and waking up once around 3:30-4ish to eat, and then sleeping until 8:30am, although that last half of the night is still really tough for us.  I can get him to go to sleep by himself just fine during naps and when I put him down at night, but getting him to go back to sleep by himself after he wakes up to nurse in the middle of the night is next to impossible.  The past 2 nights I’ve been up with him for over 3 hours trying to get him back to sleep in his own bed, and then I finally give up because I’m exhausted so I bring him to bed with me and he’s out like a light.  Maybe him not sleeping well the past two nights has something to do with his weight loss?  I’m not sure.
The doctor basically said to just try to nurse him more and to just let him sleep with us at night instead of fighting him with trying to get him to sleep in his own bed until he’s gaining weight better.  He also said to give him gas drops when he’s fussy to see if that helps anything.
So I’m just going to try to nurse him more than I have been, but nothing has changed really in his 2nd month.  I’ve been nursing him the same as I have all along, so I don’t get why he’s losing weight.  He is a skinny little thing, but he’s built just like Mark is.  His head circumference was 39.1cm I think, and his length was 22.8”, so he’s only grown .3 of an inch since birth.  That doesn’t seem like much either, but what do I know.  I wish there was a more accurate way to measure their length since people seem to stretch them out different every time they measure him.  I think he might be a little longer than that, but probably not much.
I’m going to try REALLY hard to not worry about this, but it’s hard.  I’m surprised I didn’t burst in to tears right then and there.  Wish us luck.  Hopefully I can fatten my little peanut up some! 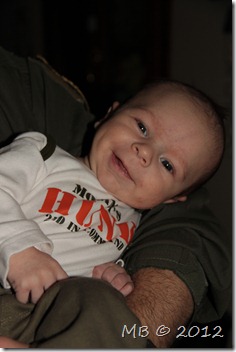 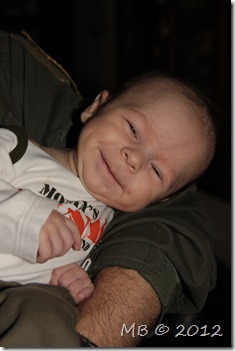 Aw, he is sooo cute! Love his smile

Okay first off, scales can vary drastically from one to another. In texas at my doc's office when I was prego they had two scales and one was waaaay off than the other one. I weighed myself on both one day because the nurse said I had gained 4 pounds in one week. So I went to the other scale next door (the one I normally used for my appointments) and it said I had only gained 1 pound. I would just stick to the one you use at home and not compare it to the one at the clinic. Temp is perfect too. Just let him nurse all the time like the doc said. It can only do good things for you and for your milk supply. Hang in there and everything is fine!

Rachel is right, scales do and can very drastically. I have a friend who has a one year old that only ways 12lbs (not joking) and they can't find anything wrong with him and he nurses also and might I add nurses well. Keep your head up and think positively that maybe it's just him trying to keep his tiny figure :) Good Luck!

Finally some smiling pictures! What a cutie pie. I have no advice regarding the appointment. If the doctor is not concerned, I wouldn't be either. I know that is putting a lot of faith in someone else, but no use stressing yourself out over something you are already taking precautions towards.

I would not stress out too much either but I would work on nursing him more often to make sure he is not getting dehydrated. Have you considered if anything is impacting your milk supply? Like I never knew Parsley can do that. GL.