Ben is a month old already!! 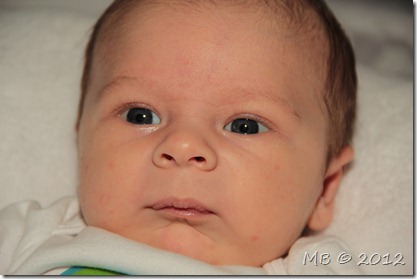 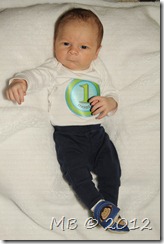 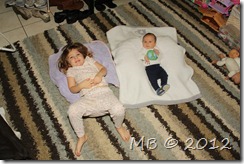 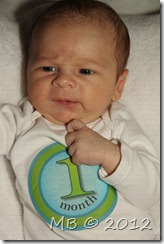 It’s hard to believe that Ben has already been with us for a full month!  Although, looking back, it’s been a pretty “interesting” month, to say the least.  I have decided that I’m really not that big of fan of the “newborn” stage.  Don’t get me wrong.  I love Ben to death and wouldn’t trade him for the world, but I do not function well on little sleep.  I am a night owl, but by that, I mean I stay up until midnight most nights.  Ben’s version of being a night owl was at first to scream bloody murder from about 1am – 3am, and then he transitioned into the “won’t sleep by himself in his own bed from 4am-8am” stage, which is where we currently are.  Newborns cry a lot, and Ben has done his fair share of that, but his cry is much more “muted” than Abbie’s was, so it’s much easier to tolerate.  When Abbie cried, you could, no kidding, hear her outside and 2 houses over when she was this age.  Ben does more fussing than full on screaming, and even when he does get worked up, he just sounds like a grumpy old man.  It’s pretty cute. 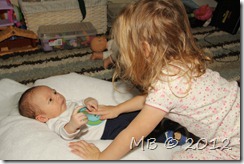 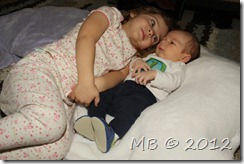 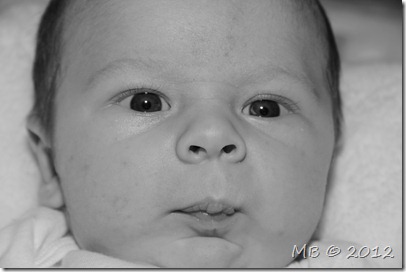 Abbie is doing much better now that she’s had a month to adjust, thank God.  For a while there I was really wondering what the heck I’d gotten myself into with having two kids.  But Abbie is doing better and her meltdowns aren’t nearly as frequent as they were.  She constantly asks to hold Ben and she loves to help with him.  I’ll be holding him and she’ll come up and say “Give him to me.", like I’ll just pass him off to her.  I have no doubt she’d try to carry him around if I gave her half the chance.  Instead, I let her “carry” his feet when I carry him around.  He’s pretty tolerant of her being in his face and being a little bit rough at times.  Ben loves to watch Abbie and many times he’ll calm down if she starts to talk to him when he’s worked up.  She loves to give him his paci and put blankets on him when he’s in his swing. 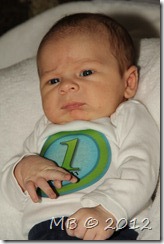 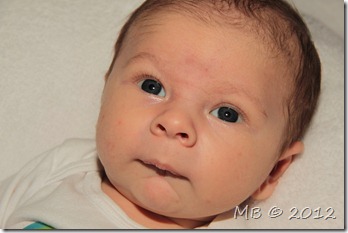 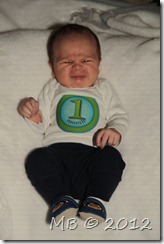 I had lunch with Brittney today, who’s a nurse at the clinic on base, and she did a quick weight check on him for me.  (Thanks Britt!!)  He was 10lbs1oz with his clothes and diaper on.  So we guesstimated that he probably weighs around 9lbs 13oz without his clothes on, which means he’s up a full pound from his 2 week appointment.  I don’t doubt he’s getting enough to eat at all, which is a huge difference from when Abbie was this age.  I was constantly worried about my milk supply with her, but I’m not worried about it this time, mostly because I feel like I have enough milk for 3 babies most of the time.  I leak quite a bit, and I flood him sometimes when I’m nursing him.  Some nights we give him two ounces of formula in a bottle so he will drink from a bottle later on and also take formula when we’re out and about.  Makes my life a lot easier, but I’ve noticed I’m not nearly as self-conscious about nursing him when we’re out in public as I was with Abbie.  Ben doesn’t nurse nearly as much as Abbie did though.  Abbie used me as a pacifier half the time, but when Ben is done eating, he doesn’t want me to nurse him any more and wants his paci back.  Abbie was latched on to me pretty much the first 4 months of her life straight. 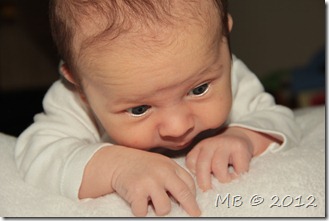 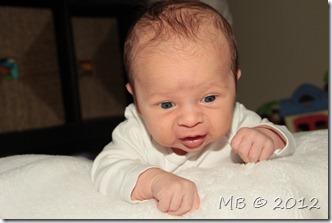 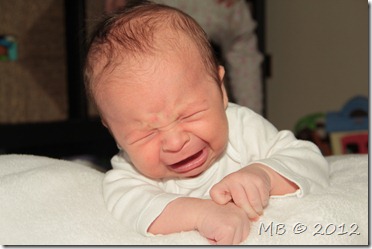 Just in the past week Ben has become easier.  He’s much more alert now and he’ll watch me as I move around and turn to look at you when you talk to him.  He’ll be perfectly content sitting in his swing or bouncy chair just watching what everyone else is doing for about 15 mins at a time.  He doesn’t cry as much in the evenings like he used to.  And we’re trying to get him to go to sleep by himself instead of us holding him and then trying to get him in bed without him waking up.  We learned that lesson with Abbie.  He definitely gets fussy when he gets tired so I usually nurse him if he wants to nurse, or we rock him until he’s drowsy and then try to put him in the bed while he’s still somewhat awake.  Usually he’ll wake up and cry when we put him down, but we just pat him and keep putting his paci in his mouth until he falls asleep.  Last night was our best night yet!  He slept from 12am-4:15am.  I nursed him from 4:15am-5am.  And then I put his paci in at 5:15am and 6:30am, and he stayed in his bed until 7:30am.  It was REALLY nice not spending most of the night in the chair.

And just to keep up the tradition, here are the Ben and weina dog pictures.  Some people measure their kid’s growth by having them hold stuffed animals in pictures (great idea!).  We’re the weirdos that put them next to the weina dogs.  (Sadie wasn’t a big fan of his screaming.) 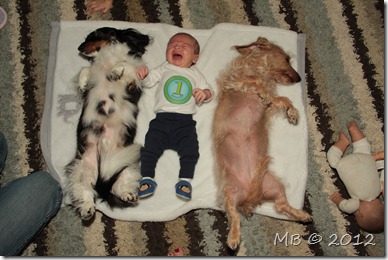 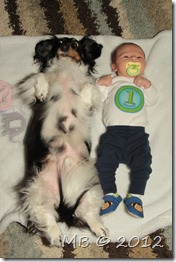 Our little stud striking a pose. 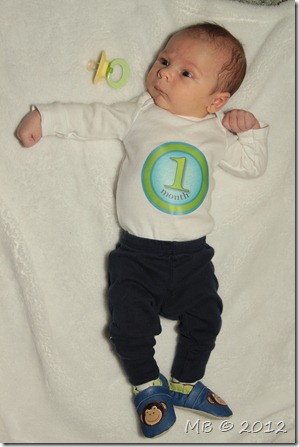 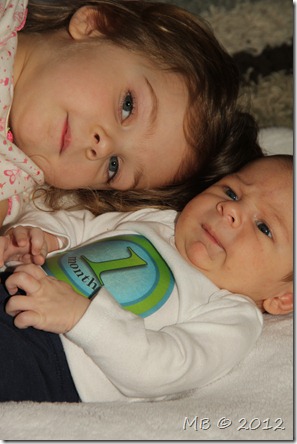 Ben is so stinking cute, just like his big sister!! I loved the wiena dog pictures too, those a pretty much a requirement for u to do with all your babies :) Glad both him and Abbie are getting easier for you. I think i would find the newborn stage really hard also!!

You're welcome, can't believe how big he is getting. The picture of him posing reminds me of the whole, "which way to da beach?" (swing arms down and up like he has them while saying, "thaddaway") hehe

Aww I can't believe he is already a month! It sounds like he has a great big sister too! I do hope you are able to get some sleep soon thoug.

Yay happy one month to him! The dog pictures are hilarious! =)

Ben looks so much like Abbie! Monica, your kids are so cute, and the photo of Ben crying surrounded by dogs is great.

Doesn't is just seem to fly by?! I love the one month shirt! Where did you find that?

I am definitely not a fan of the newborn stage either! I do not work well on such a brutal degree of sleep deprivation. M is like Abbie- when she cries, the whole neighborhood can hear her. Glad Abbie is doing better!