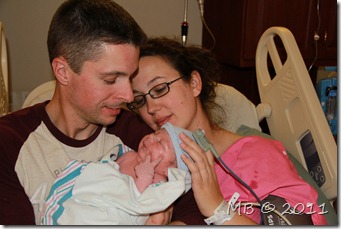 Ben’s birth ended up being WAY different than what I was expecting it to be.  I told Mark that whether or not I wanted more kids depended on how his birth went, and if all the rest of my births could be just like this one, I’d have 5 more kids!  (If someone else was paying for all their expenses, that is.) 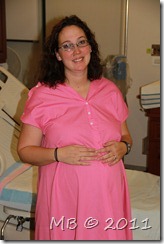 We got up at 6:09am, and I was really nervous.  VERY nervous.  Like, feeling like I was going to puke nervous.  As the day went on, I got less nervous, but I was ready to call the whole thing off in the morning.  We got ready, I talked to my friend Jennifer about last minute stuff (she came and stayed at our house to watch Abbie and the dogs for us) and we were on our way.  We got to the hospital at 7:32am and I was in the gown, in the hospital bed by 7:45am. 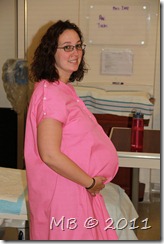 One of the most painful parts of the birth, was getting the stupid IV in.  On a scale of 1 to 10 (10 being high), the pain was about a 5, and it took them 2 tries – one on each wrist.  Luckily they got it in in 10 mins, vs the almost hour and a half it took with Abbie’s birth.  I had made sure I drank water though, to help make my veins bigger this time around.  They started an IV drip around 8:15am and I was started on 6ml/hr of Pitocin at 9:13am.  I’d been having contractions for days and this made them be a little more frequent, but my pain level was 1 out of 10. 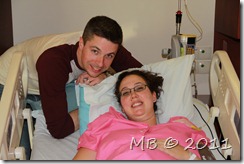 At 11:15am, the put the IV drip at max flow and the Pitocin was up to 12ml/hr and my pain level during contractions was 3 out of 10.  They were coming about every 4 minutes and lasting 30 seconds.  Nothing unbearable.  Mark and I were watching TV and I was fairly relaxed at this point.  They took my blood sugar every hour while I was in labor and it got down to 64, so they let me have an orange juice to get it up some.  Otherwise I wasn’t allowed anything to eat – not even ice.

Around 12pm, the nurse told me that the Dr wanted to break my water to pick things up after he was done with a surgery he was doing, so they advised me to get the epidural so they could make sure everything worked before he did that, since that would probably pick up the intensity of my labor a little bit.  I agreed, but I’ll admit, I was nervous.  Everything just seemed so “synthetic”, and I know that when you force labor to happen instead of letting it come on it’s own, your chances of c-sections go up quite a bit.  So the anesthesiologist came in and gave her little schpeel about risks of an epi and all that.  And then at 12:15pm she gave me the epidural.  It took her about 8 minutes (according to Mark’s notes), and it hurt some, but again wasn’t TOO unbearable, and it only hurt for a bit.  It basically felt like someone was pushing really hard on a bad bruise for a few minutes.  I wanted to squeeze Mark’s hand during that part and I did some deep breathing, but looking back, it wasn’t too bad.  Pain was probably 6 out of 10 again.  At 12:33pm, they gave me Ropiphicane (sp?) in the epidural which started to numb me.

Around 12:45pm Mark ran to Subway to get some lunch and at 1pm, they gave me a catheter, and said I was 6cm dilated.  (The nurse had checked me earlier – which hurt a LOT – and she said I was around 4cm dilated.)  Around 1:40pm I rated my contraction pain at 4 out of 10.  I could feel them, and they hurt, but again, nothing unbearable.  Even with the epi, there was one spot under my belly on my left side that I could definitely feel the contraction pain.  I could still feel my belly get hard all over, but that one spot hurt a bunch.  The nurse checked me again at 1:39pm and said I was still 6cm and he was at –1 or –2.  We were still waiting for the Dr to be done with surgery to break my water.  At 1:55pm, the anesthesiologist gave me more meds in the epi to help with the pain I was feeling during the contractions.

After she gave me more drugs, I finally found a decent position and actually fell asleep for 10-15 mins.  The problem was I had pretty much zero use of my legs from the extra medicine she gave me.  I couldn’t get comfortable in bed and my back was starting to hurt and I couldn’t move myself at all, so I had to try to tell Mark and the nurse what position I wanted to be in, and if it didn’t work they had to move me again.  Mark was pretty agreeable to helping me obviously, but the nurse wasn’t, so it was kind of awkward.  At 2:40 the nurse discovered my water had broken on its own.  I had kind of figured it did because I felt a little pop, but I didn’t say anything to her about it since sometimes I felt like I was bothering her anyway.

So around 3pm I told her I had the “I have to poop” feeling during contractions.  I knew he was low.  I don’t think she believed me though, so she waited though about 5 more contractions and me telling her every time that I think he’s coming, to check me.  She finally checked me at 3:15pm and I knew as soon as she did it that he was coming.  She got a funny look on her face and said “I’m going to get the doctor”.  I was fully dilated and he was at a +2.  She left the room and I laid there on my side and cried.  This was the part I’d been worrying about for the past month and a half and if there were going to be problems, it was going to be now.  Mark reassured me and told me it would be okay and I told him that I really had a feeling that this baby was smaller than Abbie was, but I didn’t want to say that publicly and then be wrong about it.

The doctor got in there and I was still on my side (bc I couldn’t move at all) and he said, “Ok, show me what a good pusher you are.”  (I’d told him before that I did well pushing with Abbie.)  So while I was still on my side with them holding my leg up, I gave like half a push and he was like, “Ok! Stop”, and started getting his gear on really quick.  They got me on to my back and switched the bed quickly and when he was positioned he told me to push with the next contraction.  So with the next contraction I pushed for like 10 seconds, took a breath, and pushed for maybe another 5 seconds and out came baby Ben!  It was a weird feeling because I could feeling him come down and out when I pushed.  It didn’t hurt at all, but I could feel him coming out on the inside.  He was born at 3:32pm on December 8th, and he cried when they put him on me, and so did I.  He ended up being 8lb 15.2oz and was 20” long.  All that worrying for nothing!! 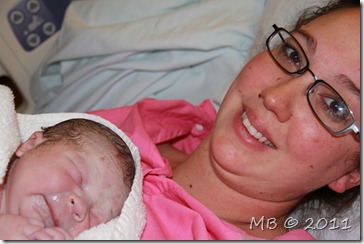 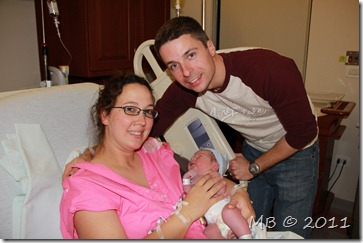 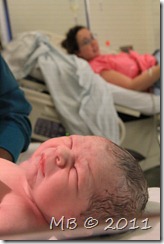 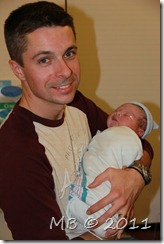 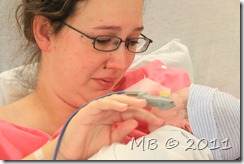 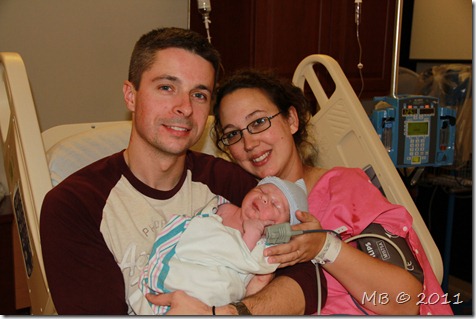 Congratulations! What a beautiful little boy!!

I love reading birth stories! So happy all went so well for you. And you look absolutely amazing for just giving birth!!!

yay!!! Congratulations, I am so glad that it went smoothly for you! What a handsome little guy!

Congratulations!! So glad to hear everything went well! You can sure tell that he is Abbie's little brother! They look so much alike...ADORABLE!

Seriously, how do you still look beautiful after pushing a human out of you?! Congratulations! He is so handsome, I am so happy for you that it went well.

Congratulations. I am so glad that your experience was everything you were wanting and more.

I am so glad that all that worry was for nothing. Congrats on a great birthing experience!

Oh, Monica!! I am so, so happy that everything went well for you. Congratulations to you, Mark, and Abbie. Welcome, baby Ben. I hope you all enjoy the babymoon and you feel better soon!

I'm so happy for your beautiful family! Congratulations!

I love this! I've been waiting for your birth story!! I'm so happy all of your worrying was for nothing. Can't wait to see the little guy!

Unbelievable. All of that worry for nothing? Those doctors shouldn't have gotten you so worked up. I bet they arefeeling silly now. Sounds like your birthing doctor was a lot more personable, and I laughed at the "Push, Stop!" glad to know you guys are all home and doing good.

I know this is belated, but CONGRATULATIONS. Glad to hear everything went so smoothly. =) See all that worrying for nothing!!