A visit with great grandma

My parents, Abbie and I went to visit my grandma one more time before Abbie and I head back to Italy.  I had hoped to visit her more than we did this summer.  She’s 96 years old. 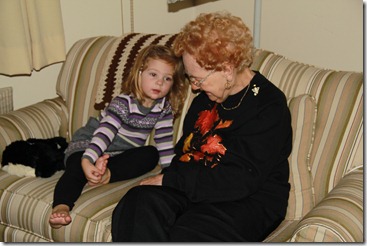 I think my grandma was quite entertained by Abbie, and Abbie loves putting on a show.  The more attention she can get, the better, in her book.  We went to lunch, ran a few errands and then went back to my grandma’s place for a little bit. 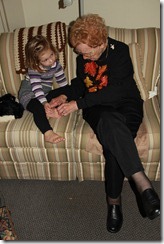 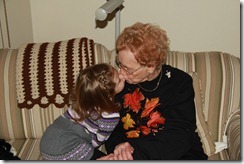 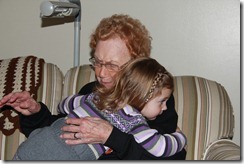 I’m not quite sure why my grandma’s hair looks so red in these pictures.  It’s really not as red as it looks. 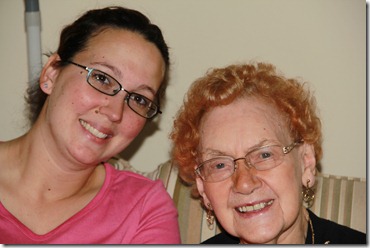 Here are a few more 4 generation pictures.  I love having these.  My grandma was more interested in looking at Abbie than at the camera though. 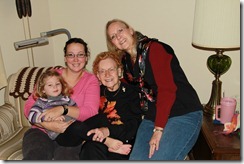 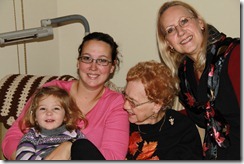 My mom and Abbie trying on hats that my grandma bought for Abbie. 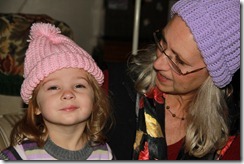 My grandma usually cries during goodbyes.  As we were saying goodbye, Abbie reached over and gave my grandma a big hug and said “I love you great grandma Ruth.”, which, of course, choked us all up.  I don’t get home that often, especially now that we live in Italy, and for the past few years, I’ve often thought that I might be saying goodbye to my grandma for the last time.  This time was no different.  Hopefully we’ll get to see her again, but we probably won’t be back to the States for at least a year or two.  It was nice to spend some time with my grandma though, and hopefully Abbie will remember our visit.