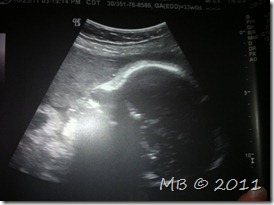 Monday of this week I had my first OB appointment at Aviano.  It was just a consultation appointment with a nurse, going over my records from the States.  However, she did an excellent job of completely freaking me out by telling me numerous things that could have gone wrong during Abbie’s birth.  She brought up shoulder dystocia and how when the shoulders get stuck they put your legs up by your head and a nurse pushes really hard on your belly to get the baby to pop out.  Sounds pretty pleasant if you ask me….  (By the way, Abbie didn’t really even have shoulder dystocia, so her telling me all of this was pointless.)  And then she asked how many times the vacuum popped off of Abbie’s head.  It popped off once, and she said, well that’s good because if it pops off three times, that’s an automatic c-section.  …  Yay.  Again, probably didn’t want or need to know that just then.  She then made me an appointment with the midwife for the next day, which I thought was a little odd since I pretty much had to beg to get the consultation appointment before 36 weeks.

I should preface this by saying that I have been told the OB care here at Aviano is pretty relaxed.  They don’t do urine tests every appointment like they have done at all the other OB’s I’ve been to.  And you go every 4 weeks until 36 weeks, and then you have appts at 38, 39 and 40 weeks and they normally don’t do any extra ultrasounds unless absolutely required.  My OB that I was going to for the first 7 months of this pregnancy switched to bi-weekly appts at 28 weeks and then at 36 weeks you started going in every week.  My OB for the majority of my first pregnancy did ultrasounds at every visit, which I know is pretty rare.

So when I went to my appointment on Tuesday, I was completely overwhelmed and frustrated by what she was saying to me.  She started about by saying, “So I see you didn’t pass your 1 hr glucose test?”.  I told her I had passed it by one point and I was worried about it so I had triple checked with my midwives in IA about it and they kept reassuring me that I had passed it.  This midwife basically said that by their standards I didn’t pass it and that I had to come in to do the 3 hr test this week.  That was the first blow.  I think part of the reason it bothered me so much is because I was really worried about it before and it had taken me a week or two to finally stop worrying about it.  This just opened up this entire can of worms again.

And then she said that she noticed I’ve had high blood pressure throughout this pregnancy.  Granted, my BP is probably higher than the average persons, but my BP is ALWAYS high at the doctors office.  For as long as I can remember, I would have high BP at appointments.  And I wrote about this during my last pregnancy too, where I had high BP at the beginning of appts and if they’d take it again at the end, it would be much more normal.  I told the midwife this and also how my midwives in IA weren’t concerned about it either and she basically said “Too bad, we’re going to test you for pre-eclampsia anyway.”  *sighs*  At this point I was fighting back tears because I was so frustrated.  I am grateful that they are concerned and just want to be extra cautious and I realize they’re doing this for the sake of our baby and myself.  I get that.  But I didn’t really intend on spending the entire 2 weeks Mark has off at the hospital doing zillions of tests.  We have a TON of stuff to do on the house and his 2 weeks off was when we planned on doing all that.  Me being at the hospital 4 out of 5 days this week and 3 days next week wasn’t in my plan, at all.  But I agreed to the tests and hopefully I’ll pass them all to relieve all of our fears.

The biggest blow was when she said that she’s going to require me to come in twice a week from now until he’s born for NST’s.  (Non-stress tests – where they hook you up to monitors and monitor his heartbeat and movement.)  I DO NOT have time for that.  And naturally she wants me to come in either Monday and Thursday or Tuesday and Friday.  Abbie is at the sitters Tuesday and Thursday, so one day a week I’m going to have to figure out what the heck to do with my 2 year old for 30 mins to 2 hrs while I sit at the hospital.  I think this is being a bit excessive on her part, but she’s not budging on having me do these things.  The first two weeks are fine because Mark is home to stay with Abbie, but after that, I’m not sure what I’m going to do.

Then she measured my belly and was like, “Whoa, we’re going to get you in for a growth scan ultrasound as soon as possible.”  My belly was measuring 35.5 weeks and I am 33 weeks pregnant.  I got in for an ultrasound later that day, and sure enough, baby boy is huge.  His head was measuring 36w1d, his abdomen was measuring 36w and his femur (which is supposedly the most accurate measurement) was measuring 34w4d.  When they averaged all the measurements he took together, baby boy is supposedly measuring 35w5d and is 5lb14oz.  (Normally they are 4.5lbs at 33 weeks gestation.)  This news did freak me out even more than I already was, especially considering all the “info” the nurse gave me on Monday about birth complications.

I really don’t understand how the measurements across your belly during pregnancy can tell them anything about your gestational age.  They use the same thing for people that are 5’0” tall and 5’11” tall and have BMI’s from 20 to 40.  Without taking other factors into consideration, how does just measuring the size of your belly tell them how big your baby is?  I don’t get it.

Apparently I’m just destined to have big babies.  I am glad they’re healthy and growing, or as Mark puts it, “Strong like bull!”, but having to push out 10lb babies is not my idea of fun.  I would be THRILLED if this little guy was 9.5lbs or under, but if the ultrasounds are accurate, he won’t be.  I’m a little jealous of people who have babies that are 6 and 7lbs and actually look like newborns when they arrive, instead of 2 month olds.  Luckily I was smart enough to not buy baby boy newborn sized clothes since I knew he wouldn’t fit into them anyway.

This week has been a little bit overwhelming for me.  It’s a lot of information to process and take in, especially when I had been thinking I was pretty healthy.  I’m currently at the lab getting a whole bunch of tests done, so I should have some answers later today.  My fingers are crossed for good results!!

He already looks as chubby as a newborn and he has 7 weeks to go!! 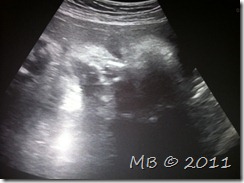 2. YOU are in charge. You don't have to do something just because a nurse told you that you *have* to. That's bullshit. You're a grown-up. Obviously, you want the best possible care for you and PP, but there's no reason you can't get that in a manner which also leaves you feeling happy about it, rather than bossed around.

3. Twice weekly NSTs? At 33 weeks? WHY?! Sure, if there's a legitimate reason, but there's really not a reason to be doing them that often for a "normal" pregnancy.

4. They are measuring your uterus, not your belly. You can feel it if you press on your abdomen. My midwife showed me how to feel where it is; it's pretty cool.

5. I don't know anything about having big babies from personal experience (talk to Liz). But I do know that baby fat squishes. As long as his head can fit through your pelvis, it doesn't matter if he's 15 pounds of extra cushioning.

6. Be confident in yourself. You know your body better than anyone else. Plus, you've been through this once before so you have the added benefit of knowing how your body responds to pregnancy (and doctor visits). If nothing became of higher than normal BP before, and you don't feel anything is out of whack, then don't fret about it this time around. I think you might really benefit from Hypnobabies, particularly learning about the "bubble of peace." If you're interested, you still have time to complete the course.

I don't suppose there are many options for care over there ? So you can't go somewhere else if you don't like how you're being treated?

Also, don't bother ditching Abbie with anyone during your ridiculous NST's. She is a part of this and they'll just have to accept that. Maybe they will reconsider the twice weekly testing if she could act-up a bit while you're there too. ;)

We've already discussed the other stuff but I had to comment on the 2 month old appearance at birth. That made me laugh! I totally get it. And have felt the same. :D
This time with Zoe, even though she was WAY smaller than the US predicted, I still had people in public guessing she was way older than she actually was. Because the US was way off this time, I was completely unprepared to have some "normal" baby clothes. Zoe swam in her clothes because I owned nothing newborn. She has very quickly made up for that.

I understand where you can be a little frustrated but I am going to have to disagree with some of the other posters here. Yes, you are your own woman and you can say no to some of the things they are asking you to do but ultimately they are only doing these things so they know and you know what you complications that you could possibly face giving birth or (heaven for bid) there be something wrong now.

The NST can see bothersome but they are to monitor the over all health of your baby. I wouldn't be so on board with them but they saved my first daughters life. If it weren't for those tests I would have gone the 4 weeks and would not known my daughter was not getting the nutrients that she needed because the placenta was going bad. They will allow your daughter to be there so bring a coloring book or what to help entertain her.

Please know they are doing this for the health of you and your baby and try not to take it so personal. Be grateful for someone being cautious because if something were to go wrong (heaven forbid) you would be wishing they did something better. Even if your child is 10lbs and looks like a two month old that is OKAY...at least you have been able to carry him and birth him, there are many woman who can't do that. Your health and the babies health comes first...who cares if your house is a disaster. Keep calm and roll with the things put in front of you, everything will be fine.

I am Sorry if you find this a bit harsh or rude but I am coming from losing two pregnancies and having two high risk pregnancies here at Aviano and I couldn't be more grateful for their over cautiousness.