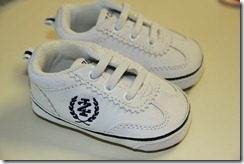 I feel a little guilty since I posted a ton of blogs when I was pregnant with Abbie and I’ve barely posted any with this little guys pregnancy.  People ask me how far along I am, and I really have to think about it based on when my last appointment was and how far along I was at that appointment.  It’s pretty bad.  With Abbie I could pretty much tell you the week and day of my pregnancy.  I guess I have a tad bit more on my mind this time around, but I still feel guilty.

Overall this pregnancy has been good.  MY SPD still comes and goes in spurts and lately, even during the “good” spurts, I’ve been having issues at night, mainly when I try to get up in the middle of the night to pee.  I have a hard time getting to a sitting position without shooting pains, and then once I actually stand up, usually within the first step or two my hips/pelvis do this horrendous “crunch” and then it’s a little bit easier to walk, but still kinda painful.  I really would like to know what exactly is “crunching”.  Lately I’ve been having some bad episodes of round ligament pain.  Usually they’re short-lived and only happen when I try to roll over at night, but I don’t remember having this at all with Abbie.  However, I’ll take the round ligament pain over the migraines I had with her any day.  I’ve recently started getting reflux, which I also had with Abbie.  It’s pretty annoying and gross, but not terrible.

Other than that, not much is going on.  I have my glucose test at my next appointment on the 23rd, and I’m kinda nervous about it.  Not that I’m really afraid anything is going to be wrong, but I’m good at worrying, so I do.  I’ll be glad when it’s over.  I’ve been monitoring my blood pressure at home, and usually it’s pretty good – ranging from 110/60-ish to 140/80ish.  Not perfect, but not bad either.

I’m excited for this little guys arrival, but it seems so far away at this point.  I feel like a billion things are going to happen between now and then, which there are, so it’s kind of easy to not think about the fact that we’ll have another kiddo in a few short months.  I feel like I’ve been more emotional during this pregnancy, but I’m not sure if that’s because Mark is deployed or the fact that living with my parents can be pretty stressful, or because I’m pregnant, or some combination of the three.  I’m excited to be pregnant with Mark actually around, so I’m very excited about next month.

Oh, and I’ve found lots of cute boy clothes in the past few months, which has made the shopping for him a little more fun.  I’ve been finding lots of “moose” clothing, so its fun to get him that stuff since that’s Mark’s call sign.  He’ll be well dressed, I think.  I can’t wait to get pictures of him in some of the outfits I got him.  Hopefully Mark will approve of all the clothes I bought for him.

I can feel your pain! Literally! Sometimes if I am laying on my side and want to roll to the other side I literally get stuck on my back in excruiating pain! Like I literally can't move my hips and lower back just won't move!

I asked the dr. about it and they said sometimes with your second/third pregnancy your hormones cause your hips and pelvis to start loosening earlier than in your first. And then they told me there is nothing I can do about it. *SIGH*

Oh well. Soon enough we will have our little ones in our arms and the SPD and all the aches and pains will be a distant memory.

Those shoes are so cute! I love baby shopping. I am sorry to hear about your round ligament pain. I have been having pains too that I do not remember with my first pregnancy, they are all so different. I hate that dang glucose test! Mine is coming up too. I am glad mark will be around while you are pregnant, yay for next month!

I'm happy you're finding so many moose baby boy clothes -- that's so fun! There's not any baby boy clothes with 'hooks' on it -- hehe :) Miss you and can't wait for you THREE to come back soon!