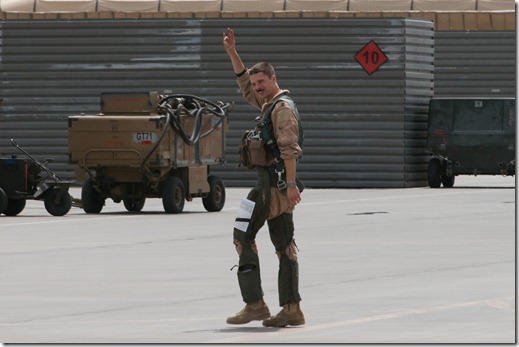 Mark sent me this picture over the weekend.  I absolutely love it and I can’t stop looking at it.  As soon as I opened it, I started to cry, which was slightly embarrassing since I was in my in-laws living room.  I don’t think they noticed though, thank God.  Everything just kind of hit me when I saw this photo.  He’s the same person I remember saying goodbye to over 5 months ago, and yet he seems SO different too.  It makes me wonder how he’s going to be different in person also.  I don’t think fighting in a war and experiencing what he’s experienced over there can NOT change a person.  Just talking to him on the phone, he seems more “mature”, I guess.  Not that he was at all immature before he left, but mature in a more seasoned or experienced sort of way.  I’m not worried about him changing for the worse as a husband or a father, I just think it might be a little different somehow, than it was when he left. 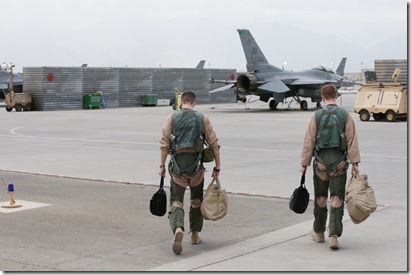 I like to pretend that he’s at summer camp over there.  When we video chat, I usually just see him from the neck up, so I don’t see the flight suit and g-suit and all the other flying garb that he has to wear, so it’s easy to pretend that he’s not in a war zone.  However, seeing him in his flying attire just makes it seem all that much more real.  I’m very glad we’re on the home stretch of this deployment. 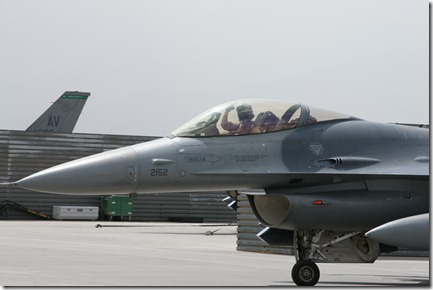 Mark told me that his name will be put on this jet when they get back.  (That’s also him in the jet.)  I’m excited to get a picture of him by it after it has his name on it.  We both think that’s pretty neat.
It still surprises me sometimes that I’m actually married to someone that flies fighter jets for a living.  Never in my wildest dreams could I have even imagined this lifestyle, but I wouldn’t trade it for the world.  Well, I would trade the deployments, and the long hours, but other than that, it’s a pretty exciting lifestyle to live.  I am so proud of Mark for everything he has accomplished in the five short years we’ve been married.  I cannot WAIT for him to come home sometime next month.  I lay awake at night dreaming about him getting off of or out of a plane and giving him a big hug.  Not too much longer now!

These pictures are awesome! I'm excited/nervous to see the changes when my husband gets back too. I totally agree with you when it comes to them becoming more mature. I liked what you said, it wasn't that he was immature before, just seems more seasoned now just after the past (almost!!!) 5 months. I do see lots of people struggle with redeployments, and I know it won't be the same, and I'm hoping that we don't have those issues. Maybe that is just me being naive but, I guess I'll find out!

Great pics! The stache made me seriously giggle. Is he going to keep that for you in October? ;)