This past weekend I met up with four friends from Italy, who’s husbands are deployed with Mark.  It was so nice to see a few of my squadron friends again, and to take a little break from being a mom.

I will say that I’ve never spent more money on food in my entire life, but when you’re pregnant and in Vegas, there’s not much else to spend money on unless you gamble (which I didn’t).  Shockingly <sarcasm>, there aren’t any maternity stores on the strip and obviously I wasn’t drinking.  But I sure ate well.  I felt pretty guilty spending $50 – $80 per dinner.

The first night we were there, we ate at Lemongrass, which was Thai food.  I’ve only had Thai food a couple of times, but I’ve liked it in the past.  The other girls bought this soup as an appetizer, which was too spicy for my taste, but I enjoyed trying it.  And I found something on the menu that sounded good, and I ate the whole thing!  Apparently I was hungry!

(Tisha and Lisette enjoying the soup.) 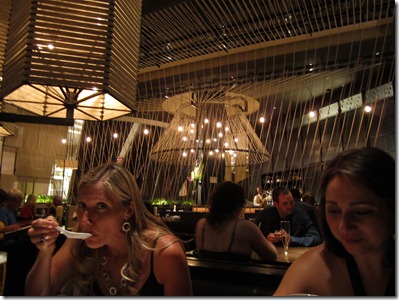 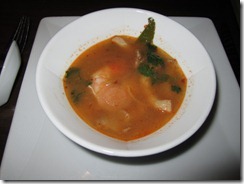 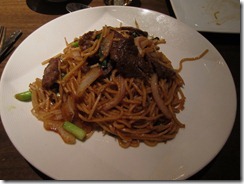 The next day we decided to go to PF Chang’s for lunch and then do a little shopping after we’d hung out by the pool a little bit.  However, we never made it shopping since Lisette’s wallet got stolen (from her purse that was hanging on the back of her chair) while we were eating lunch.  The people apparently knew what they were doing since the manager looked at the surveillance tapes, which showed the couple walking around the restaurant once, then sitting down at a dirty table next to us for 15 seconds and then the woman getting up and pretending to drop something behind Lisette’s chair and then leaving.  We realized it was missing probably within 30-45 mins of when they stole it and they’d already gone to an Apple store on the strip and tried to spend $3000…  NOT cool.  So we spent a while getting my friend’s cards cancelled and filing reports with the hotel security and the policy.  We were all extra aware of our purses after that and made sure that we only carried one form of ID (verses both our military ID’s and our driver’s licenses) and one credit card, which we should have done from the start anyway.  Hindsight is always 20/20 though.  Also, as a precaution, make SURE that you use a purse with a zipper and close it when you’re in crowded places like Vegas.  Lisette’s purse just had a snap closure on it and we think that’s how they were able to reach in and get it.  But how they did that with all 4 of us there was beyond any of us.

(Myself, Tisha, Taryn and Lisette riding in style to lunch.) 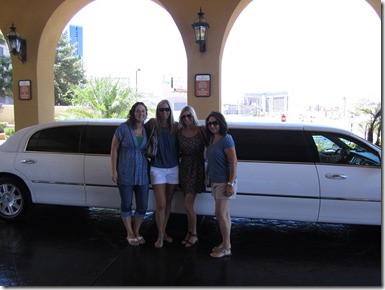 (Taryn and myself in the limo.) 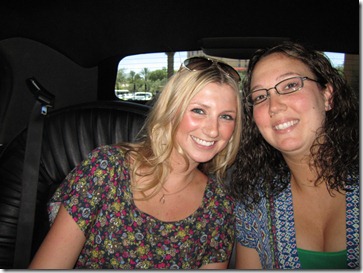 After the wallet ordeal, we went home to change and get ready for dinner and the show.  We ate at Michael Mina’s Seablue at the MGM and then we saw Cirque du Soleil’s KA.  Both were amazing.  The food was some of the best I’ve had (which was good since it was expensive) and KA is a fantastic show.  I’d seen KA before with Mark, but we had better seats this time, so it was even better than I remember.

(Lisette and me in front of Seablue.) 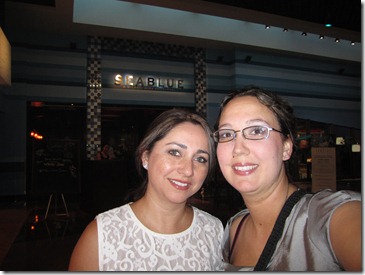 (I splurged and got the surf and turf – filet mignon and lobster.  Those potatoes that the filet is on were AMAZING though!) 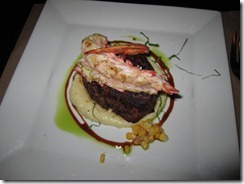 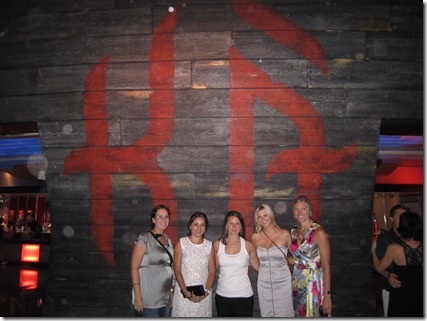 (A few pictures of the strip.) 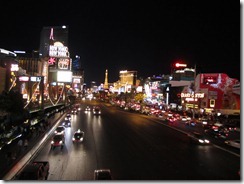 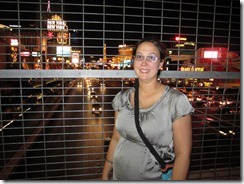 After the show, Christina had to leave because she had to work on Saturday (boo!), so she headed home and we headed to Nine Fine Irishmen, which is a fun bar in New York, New York hotel.  We ended up meeting a group of guys that were in the British military and it was fun talking to them and listening to the Irish band and watching the dancer.  They obviously knew we were married so they asked about our husband’s and when we told them we were married to fighter pilots they said “Well how are we supposed to compete with that?”.  Haha.  You’re not.  I asked the one that was sitting by me if he knew Bear Grylls (from Man vs. Wild) since he supposedly was in the British Army too and he rolled his eyes and made the “jerking off” sign with his hand.  LOL!  It’s funny because my husband has a dislike of Bear too, so I found it hilarious that there seems to be a mutual dislike (jealousy??) of him worldwide.  Anyway, I lasted until 2:30am Vegas-time (4:30am my time) and I hit a wall and needed to go home.  So I headed back to the hotel by myself and got some sleep. 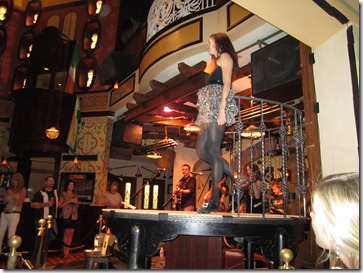 Saturday we did some shopping  in the afternoon and ate lunch at The Cheesecake Factory (at 4pm!!).  I actually found a few things that fit me and I bought baby #2 it’s first thing – a little green onesie from H&M.

(Heading out to go shopping.) 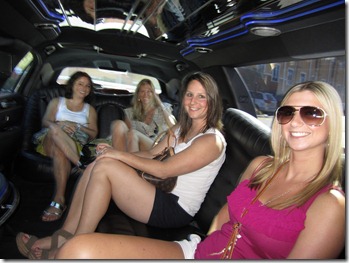 We shopped until about 7:30/8pm and then came back to the hotel to change and get ready for dinner.  We ate at Khotan at Treasure Island, which was pretty good and we had a good view of the Siren’s of TI show from our table on their deck. 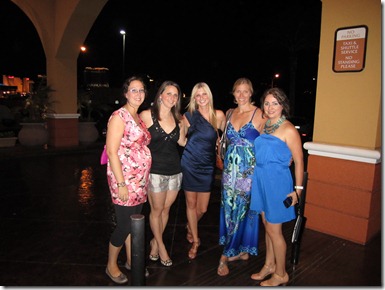 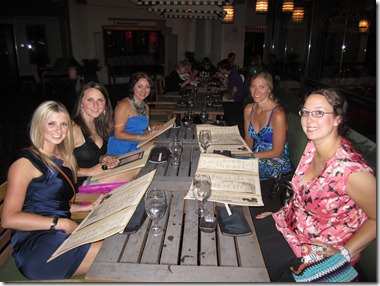 After dinner, the rest of the girls headed out to a bar, but I headed home.  Being pregnant in Vegas is an interesting experience.  Bars definitely aren’t that fun when you can’t drink, so I figured I’d just head home early and get packed.

Overall, Vegas was a good time and I’m glad I got to see these girls.  It feels like it’s been forever since I’ve been in Italy around my squadron friends, so it was great spending time with a few of them.  And after I’d said goodbye to Abbie, I was fine.  It was the leaving her that was hard, but after I was gone, everything was fine.

Less than three months until I get to see the rest of my squadron friends!!  I’m so excited!

That's so cool that you all met up in Vegas! Did everyone live around there or was it just a good meet-up spot?!

This made me laugh out loud:
“Well how are we supposed to compete with that?”. Haha. You’re not.

My husband is from Vegas, and I went to college there, so this whole post had me a little nostalgic. And hungry. Very hungry! Yum!