This past weekend I went to Chicago to visit my in-laws.  I think they really enjoyed seeing Abbie and Abbie LOVES being the center of 4+ people’s attention.  She can be rather challenging after we leave Mark’s family when she realizes she’s not going to get everything she wants anymore.

Saturday I went to my friend, Martha’s apartment.  I met Martha in college and we’ve kept in touch, but have only seen each other a handful of time since we graduated (almost 10 years ago?!?!).  It was really great seeing her again and seeing a little of her lifestyle.  Martha has a very nice apartment close to downtown.  It’s fun to imagine what my life would be like now if I was in her shoes – single, no kids, good job.  Not that I would ever trade the life I have for anything, but it’s interesting to get a taste of a lifestyle so different from your own.  We ate lunch at Stir Crazy, one of my favorite restaurants, and then shopped a little.  Then we went back to her place and watched a movie/napped and then we headed downtown and ate dinner at Harry Carey’s and saw the musical CHICAGO. 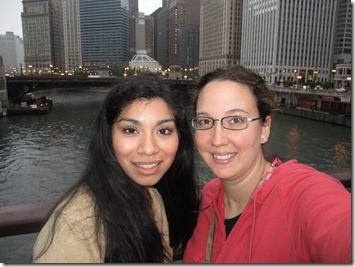 Martha is a very striking person.  She is of Mexican decent, so she has the darker skin and the GORGEOUS long, thick, black hair.  She has beautiful, big, brown eyes and a perfect smile.  She gets noticed.  A lot.  As we were walking the few blocks from the parking garage to the restaurant, she received more than one cat calls, whistles and guys checking her out.  She had a cab pull up and ask if she needed a ride, even though she’d given him not even a glance, and some guy said “Hey baby” as we walked by.  I asked her if she was used to that and she was like “They’re not doing that to me!  They’re doing that to you!”.  LOL!  Yeah.  Right.  My chunky 15 week pregnant self never gets noticed, let alone looked at twice and acknowledged.  And then she was like “It hardly ever happens.”  Ha!  Again, it’s happened 3 times in the past block, so I’m not sure I believe that either, but I appreciated her modesty.  And I loved the way she 100% completely ignored them all, even when they were turning around to stare at her.  I’m happily married and only really want the attention of one guy, but it would be quite a confidence boost to get noticed like she does.

Dinner was really good, even though I could barely finish half of it, and the show was entertaining.  I was a little nervous because Martha didn’t even know what CHICAGO was about, but she found it very enjoyable.   It was a good show, but I was a little disappointed.  After having seen the movie more than once, it’s a little bit of a let down.  There were no scene changes at all, they just dragged chairs around the stage a few times to use as props, and the leads weren’t as good as they are in the movie.  They had more “theater” voices I guess, which I find less appealing.  I’ve seen quite a few off-Broadway and Broadway shows and this was probably one of my least favorite.  It just didn’t have the excitement that other ones have had.  Thinking of Cats, or Phantom of the Opera, or Les Miserables, or The Lion King, or Rent – they all had a LOT of action and things going on and amazing props and costumes and scenery.    In CHICAGO, they were all dressed in black, there weren’t any scene changes and only used chairs as props  There was some fun dancing and singing obviously, but it left me wanting more.  I’m glad we went and I had fun, but I wouldn’t be upset if I didn’t see it again on stage.  I’ll stick with my DVD. 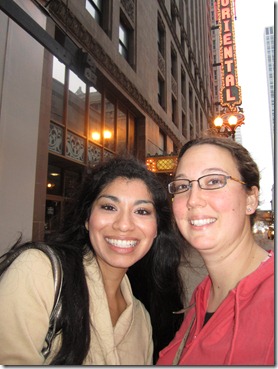 I should also mention that Saturday night was my first time being away from Abbie overnight.  It was easier than I was anticipating.  Luckily my MIL was good about answering my texts, but I didn’t think about her constantly like I thought I would.  I knew she was having fun with her grandma and uncles and I probably wasn’t on her mind at all.

On Monday, we got to eat at Potbelly’s (my FAVORITE sub place!) and I got a few outfits at Motherhood Maternity.  I think I’m done buying maternity clothes now.  I have enough to last me the rest of this pregnancy  I found a REALLY cute pair of capris that I absolutely love.  I’m excited to wear them a bunch!  I wish I could find a pair of non-maternity capris that fit that well and were that cute.  I just love them!

Tomorrow morning we’re heading back to my parents house and hopefully Abbie does okay on the 2.5 hour ride home.  I’m going to be armed with a sippy cup of milk and 2 DumDum’s.  (She LOVES suckers!)  Wish me luck!

Wife of a Sailor said...

I looooove Chicago! Just wanted to let you know, one of your questions will show up on MFF tomorrow!

We're headed to Chicago (home for us) next week and can't wait! It's so nice to spend time with old friends. Thanks for joining the Roundup this week.