I grew up with Golden Retrievers.  My parents had 2 when I was born and we’ve owned 5 more since those.  (They usually had 2 dogs at all times.)  I love Golden’s.  They’re such kind, gentle animals and are easily trainable.
Before we were married, Mark bought me Oliver, a long-hair Dachshund, for my 25th birthday.  Although, it might have been more for him since he’d always wanted a weiner dog.  When we got Ollie, I was looking for a job, which meant I was home all day searching the internet and mailing out resumes.  We got Ollie when he was 9 or 10 weeks old, and yet he still seemed to imprint on me.  I thought that only much younger animals imprint, but Ollie, almost immediately, thought I was his mother.  He followed me EVERYWHERE.  He was not happy unless he was touching me.  He was so bad that for the first few weeks we had him, he would jump into the SHOWER with me and sit in the back of the tub so he could see me.  And then for a few weeks after that he’d sit on the bath mat outside the shower and whine/howl.  We had planned for him to sleep in a crate in our room and after a full week of trying to get him to sleep in a crate, we finally gave up.  If you’re familiar with Dachshunds, you know that most of them are very strong-willed, tenacious little animals, and Oliver definitely fits that description.  He barked ALL. NIGHT. LONG every single night.  He would scratch at the cage door, and try to chew his way out of it.  We’d go in there 2 hours after we’d tried to go to bed, and he’d be breathing super fast and be covered in his own slobber.  None of us slept and we finally gave up and brought him to bed with us, and what do you know, he slept for like 10 hours straight regularly.  I’m fairly certain his breeder had him sleeping with her, so that’s what he was accustom to. 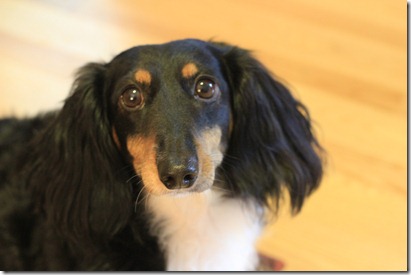 At first, I really didn’t like Ollie all that much.  He was needy and clingy and I just wasn’t used to that from an animal at all.  But he eventually grew on me after a couple weeks and he very much was our first kid.  I’m fairly certain that he doesn’t realize he’s a dog half the time.  I sleep with him wrapped in my arms like my little stuffed animal, and he’s very snuggly.  He definitely keeps me company when Mark is away. 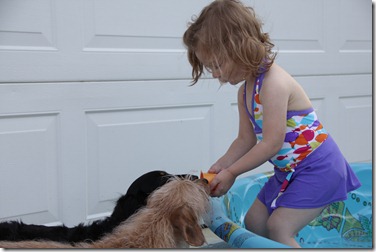 We got Sadie, our wire-haired Dachshund,  from a farmer who was selling puppies on the side of the road.  She’s our little fireball.  Full of spunk and energy, but afraid of her own shadow half the time.  She’ll preemptively yelp if she thinks anything bad is going to happen, even if nothing even touches her.  My parents big cat looks at her the wrong way and she makes so much noise you’d think someone cut off her leg.
Sadie is great with Abbie.  She’s very patient with her and lets Abbie pretty much maul her.  And Abbie loves Sadie too.  Ollie is terrible with Abbie.  He mostly views her as competition and he growls at her any time she gets near him.  And he’s bitten her a few times.  Not good.
My parents have an 11 year old Golden Retriever, Maddy, who’s never really been around little kids, and she is EXCELLENT with Abbie.  Abbie gets in her face and gives her “hugs”, and crawls all over Maddy when she’s laying on the floor, and Maddy doesn’t mind in the least.  I’ve been wishing we had bigger dogs for a while now, but seeing the way Maddy is with Abbie has just confirmed the fact that our next dog will be a large breed. 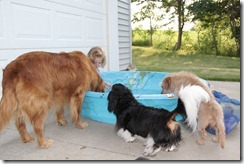 I love my little weina dogs and they are like kids to me, but I don’t think I’ll ever have little dogs again.
Sidenote: The weinas are lots of fun to photograph, particularly when they’re running.  Ollie is fairly lazy and prefers to stay in one place for long periods of time.  Sadie, however, is either standing still or she’s running flat out.  I’m still trying to get good pictures of her in motion since she’s MUCH faster. 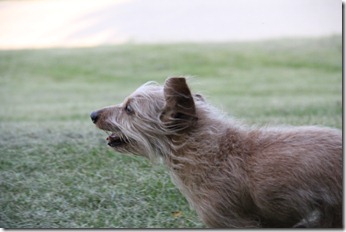 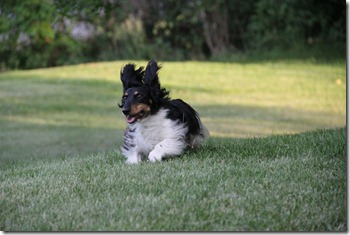 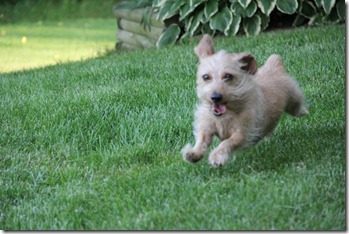 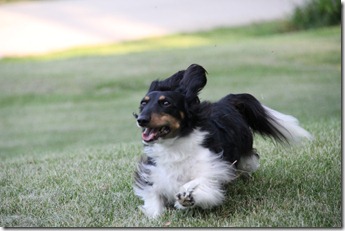 Your dogs are very cute!!

I love the running pictures, so cute!

Awesome running pictures, but I totally understand. Since having my son, I have appreciated even more having a bigger, gentle pup. Love my golden mix :-)