Well he’s gone.  And as much as it completely sucks, I am relieved.
The anticipation leading up to him deploying was pretty bad.  I did really well all week.  I was in a good mood and I wasn’t dwelling too much on the fact that he was going to be leaving for over half a year very soon.
Three days before he left I had a minor meltdown.  The way he was looking at Abbie completely broke my heart.  He loves our little girl so much and seeing the sadness on his face at the thought of leaving her was really, really hard for me.
Two days before he left, we had a good day.  It was BEAUTIFUL outside and we spent a lot of time hanging out on our porch, enjoying the sunshine and 70 degree weather.  We did a lot of reassuring each other, that this is what’s best for his career and in the long run, this is a good time for him to go.  All of what we said was true, but I’m not sure either of us was convinced at the time.  He picked a LOT of dandelions for Abbie and they had fun blowing the seeds everywhere.
The day before he left wasn’t nearly as hard as I thought it was going to be.  I found myself wrinkling my nose to try to get rid of that tickle that comes right before you cry more than once, but for the most part I held it together.  Until he was doing his night time routine with Abbie…  That’s when I completely broke down.  I sat on the steps outside Abbie’s room and listened to him read her books, and them sing songs together and laugh together and I swear my heart broke in two.  I cried for Mark because I know this is harder on him than it is on any of us.  He realizes how long he’s going to be gone, and how much Abbie is going to change while he’s away.  I cried for Abbie, who really has no clue what’s going on, but she’s going to be asking for daddy pretty soon, like she always does.  I think I can handle being away from Mark.  I know I’ll get to talk to him regularly and that we’ll be okay.  But I have a very hard time with Mark and Abbie being separated.  They’ll be okay too, because really, what choice do they have?  But it really sucks.
Today I got up and made Mark breakfast before 5am.  I’ve been getting up with him every morning and making his coffee and breakfast for him before he goes to work since before he left in January, and I’ll miss that time with him, even though I’m usually half asleep.  I drove him to base and we said goodbye in the squadron parking lot.  I didn’t cry the whole way to base – we just talked a lot, but saying goodbye was pretty hard.  Watching him walk away was even harder.  And waving goodbye to his jet as he flew off was one of the hardest things I’ve ever had to do in my life. 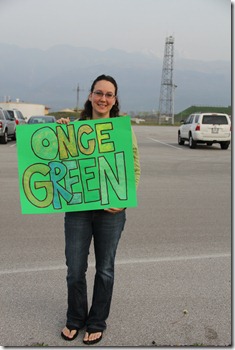 The ride home from base was the hardest one yet.  I’ve done pretty well all day.  I have a hard time talking on the phone about him being gone.  I have to fight for composure at times, but overall, it’s better than I anticipated.  I got to talk to Mark a little bit and that was hard.  I told him stuff about Abbie said about him and he asked me not to tell him that type of stuff yet and I felt terrible.  I know I will never know what it’s like to be in his shoes. 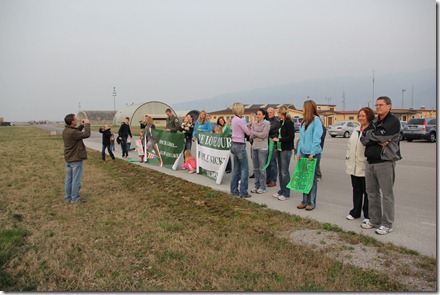 But the good news is the worst is behind us.  It’s all downhill from here, I think.  Thanks to all my of my family and friends for all of the support you’ve shown me.  I couldn’t get through this without you all. 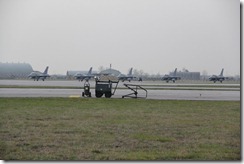 (Mark is in the middle jet.) 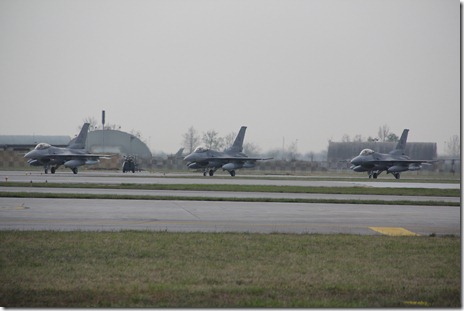 OPSEC: For those worried about OPSEC, I wrote this blog previously, so “today” isn’t actually today.

I'm sorry he had to leave. I completely understand every mixed emotion you wrote about, and how heartbreaking it is to know the little ones have to experience the absence too.

You made it through today though. And the first few days are hard because you are finding your routine. I hope all these next days seem to fly by until he can come home.

It helps to plan to do things while he's gone so that you have shorter-term things to look forward to and take your focus off of the deployment. I took my two boys to Tuscany on a trip with the other squadron spouses, and it was a wonderful time and a great break up of the time he was gone.

I hope the time flies for you both and he's home before you know it!

I'm sitting here in tears just thinking about how strong you guys are. Six months is a long time—but you already know that. I love your blog because you tell it like it is and you haven't sugar-coated things (from what I can tell), so I'm anxious to see how this deployment will be on you and your daughter. We've been through two deployment, but they were for much shorter lengths. When we go to Italy, though, it'll be for six months. Hang in there!

I'm sorry you all are going through this. My husband has deployed twice, but that was before we had our daughter. I can't imagine it now. Stay strong!

Hang in there chica! I agree that the worst part is saying goodbye. You guys can do it ... and I bet it'll go faster than you think!! (hugs)

Awww. You have a good group of women there for support before you leave and until when Mark is back.
If you need a moment take one, ball those eye balls out if you need too. It will be over before you know it.

Sniffles. This brought tears to my eyes. Hugs to you!

This is so well written. I have tears in my eyes from reading it. Your family will be in my thoughts. Mark sounds like a GREAT daddy!