I keep hearing about all the bad weather they’re getting back home and it’s hard to imagine because it’s been beautiful here lately.  In the 50’s and sunny all day long!  I love it and it definitely makes the days a little brighter, in every way it could.

I took Abbie to a park that’s on our way to base yesterday.  (More pictures from that later since I took them with my other camera.)  I asked her if she wanted to play at the park, and she did, so we stopped.  Today we passed that same park, going the opposite direction we were yesterday and she saw it and said “Play?”.  I couldn’t believe that after being there ONCE, she recognized it while going by it in the car and wanted to stop again.  We ate with my friend, Jennifer, at a restaurant near base last week, and the next day we passed that restaurant (that we’d only ever eaten at that one time), and she said “Eat with Jennifer?”.  Seriously?  Is it normal for a 20 month old to be that aware of her surroundings?  I didn’t even know she was looking out the window most of the time because it seems to me that she’s always screaming for a book. 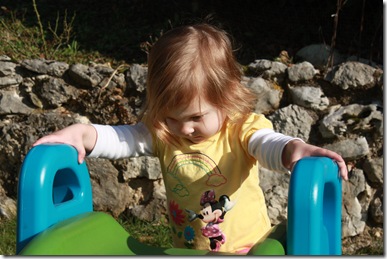 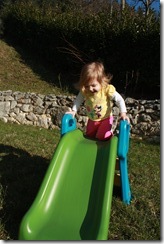 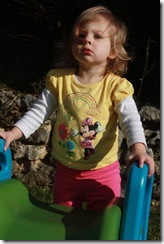 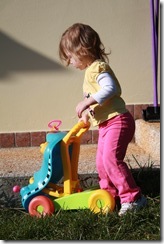 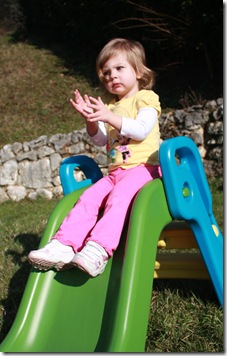 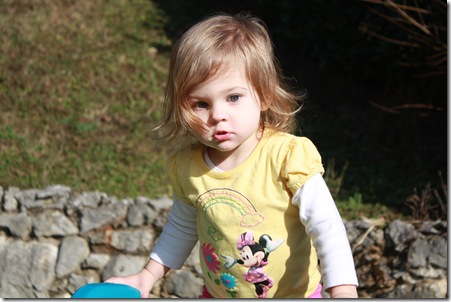 Here’s Abbie trying to figure out how to get a size 5 diaper on her tiny baby doll.  *grins*  Keeps her entertained for at LEAST 3 minutes! 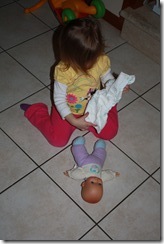 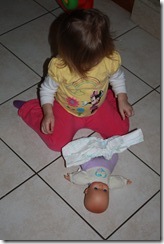 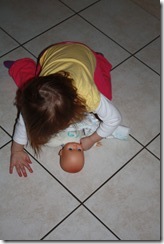 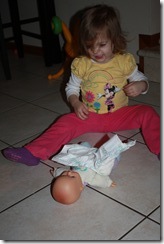 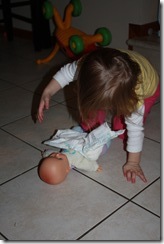 My car has been running hot lately and a fan has been blowing on it for 3-5 minutes after I shut the car off.  Yesterday it got hotter than it had before, so I decided to take it in to the dealership so they could figure it out since I don’t like worrying about it every time I drive it.  It had enough radiator fluid in it so I’m not sure what the deal is.  The guy at the dealership (who I’m on a first name basis with now because our car has been there so much in the past month) said it could be a thermostat stuck.  I hope it’s not expensive whatever it is.

So I called the dealership around 10am, and I had a lunch to be at at 11:30am.  He said I could bring it in right away, so I called Brittney to ask if she could help me, and of course, she –being the life-saver she is- was able to help.  So she followed me to the dealership in her car, we put Abbie’s car seat in her car after we dropped the Passat off, we drove to base to get Mark’s car (which has been sitting for 3 weeks), and of course the stupid thing didn’t start.  The thing normally doesn’t start so I can’t say I was too surprised.  But Mark has jumper cables in his car, so Brittney and I jumped my car all by ourselves!  I was pretty proud of us, but we did call her husband to ask how to disconnect them after we got my car started.  Jumper cables make me nervous because I’m always afraid that I’m going to get electrocuted from them or something.  Anyway, so now I have Mark’s car and my car is at the shop, but at least I don’t have to pay for a rental.  I just hope his car starts for me tomorrow morning or I’ll probably freak out.  Oh, and I was only a few minutes late to lunch! 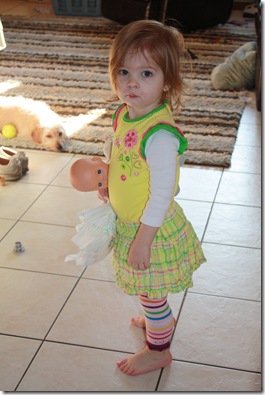 Abbie Dabbie Doo left a book in the car. I will have to get it back to you! It all worked out, hopefully they get it fixed and it doesn't cost very much! Just let me know when we need to pick it back up!

I just came in from shoveling 13 inches of snow (in some spots, 3 foot drifts in others) and likely wont get to see my Jay Jay for awhile so i am VERY VERY jealous of your good weather!! Hope your car situation gets figured out, and cheaply!

Ellie is the same way about remembering things like that. It never ceases to blow my mind and amaze me. :) We just have a pair of baby geniuses on our hands! ;)