These past 5-6 weeks have been crazy for us.  It feels like we’ve been going non-stop with little room to breathe between our trips.  Needless to say, I’m glad to be home.  I love to travel and see the world, but 4 trips in under 6 weeks is too much, especially with a 19 month old in tow. 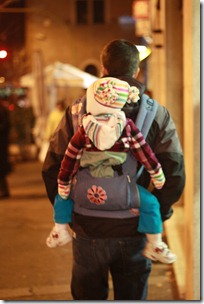 We just got back from a week in Rome with Mark’s family.  I’ll post a blog about that later.  Rome is a really neat city, but it seems the further south you go in Italy, the more rude the Italians become.  It’s very obvious that they all just think about themselves only.  I’ve never encountered a more rude group of people in my entire life.  Mark, Abbie and I were trying to get off of a bus.  We were the only 3 people getting off and we were standing at one of 3 sets of doors on the bus.  Normally, in any other country, the natural thing to do is to wait for people to get off of the bus before you start barging on.  Oh, but not in Italy.  There were 2 guys trying to get on, and they each pushed their way on either side of the railing in the middle of the doorway so Mark and I couldn’t get out either side.  Obviously the bus driver wasn’t paying attention because he closed to door and drove 5-6 blocks to the next stop before we could get off and walk back to where we had originally wanted to get off.  As I said, they’re just rude, completely inconsiderate people and it starts to wear on you after a while.

There seems to be some sort of organized chaos here, especially when it comes to driving.  In Rome, there were many roads that were probably 3 lanes wide, but they didn’t have any lane markings on them.  I guess it makes sense since the Italians don’t pay much attention to them anyway, except to drive directly on them since they can’t make up their mind which lane they want to be in.  So it was normally this herd of cars randomly driving down the road, not even close to being in any sort of lines.  The only semblance of order was that MOST of them were going in the same direction.  And if there did happen to be lines on the road, there were almost always at LEAST two cars side by side in one lane.  Seriously, it’s nuts.  I can’t believe there aren’t more accidents, but I guess they all seem to know what they’re doing, even if I have no clue. 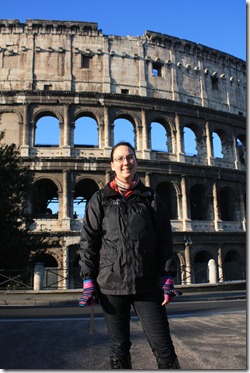 The bathrooms in Italy are odd.  The Italians apparently don’t have a use for toilet seats, they just have the bowl, at best, and sometimes it’s only a hole in the ground.  It’s a good thigh workout every time you want to pee, that’s for sure.

This trip we shared a room with Abbie, and that is not my idea of fun at all.  Abbie is a SUPER restless sleeper and she flops around in bed all night long, moaning and grunting and waking up.  When she’s in her own room, she rolls over and goes back to sleep.  However, when she’s in a room with us, she stands up and starts talking and won’t go back to sleep until you get out of bed and put her back to sleep.  Ugh.  I’m a light sleeper when it comes to Abbie anyway, so any time she’d breathe deeply, I’d wake up, and there were multiple times Mark and I were in bed, holding our breaths, being as quiet and still as we possibly could be in hopes that she wasn’t actually waking up, just rolling around.  It’s not fun and it stresses me out.  Next time we’ll get our own place with 2 bedrooms so we all sleep better. 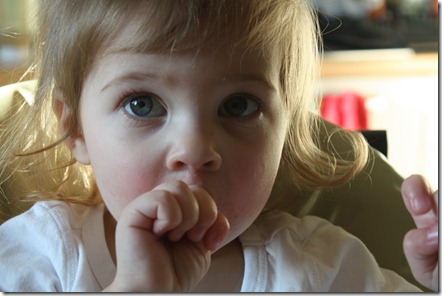 Abbie was somewhat of a monster on this trip too.  She’s really good at traveling, that part wasn’t the problem, except for a few hours on the way home.  But she is the bossiest 19 month old I’ve ever seen.  She knew she had every one of my in-laws in the palm of her hand and she took FULL advantage of it.  She’s usually a good eater at home, but she wouldn’t eat anything we gave her when we were in Rome, with the exception of goldfish and milk.  We have her going to bed with bottles of water at home, but there she wouldn’t throw a full on fit if we didn’t give her milk and since we were in an apt with 5 other people and normally it was 3am, we just gave it to her.  If you walked out to get milk, as soon as you walked back in she’d be quiet and lay down.  Grr… 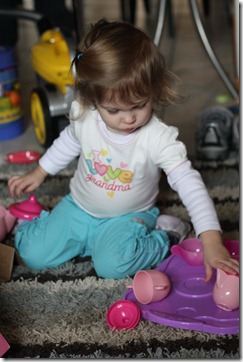 Anyway, I’m currently working my way through mounds and mounds of laundry and trying to get the house organized.  I just downloaded the motivated moms app for my iPhone and I think I’ll really like it.  It gives you a list of daily chores and then weekly, bi-weekly or monthly chores every day.  I think this will help me stay on top of my housework a little better.  I also just ordered fabric for my 3rd quilt that I’m pretty excited about.  Fabric is outrageously expensive though, but at least it’s cheaper online than it is here in Italy.

Hope you are having a fantastic beginning to 2011! 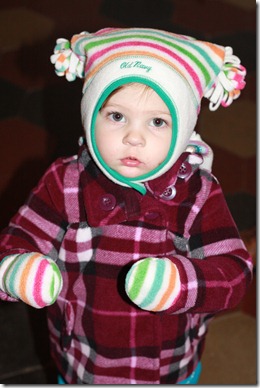