The fog is gone.

There’s not been anything too exciting going on here lately.  Abbie and I are in our routine, and the days seem to be going by, slowly but surely.  My internet has been EXTREMELY slow for the past week, and currently, it isn’t working at all, so who knows when I’ll actually get this posted.

It’s been really foggy here for the past 5 days.  Just today (Thursday), the fog finally lifted and I can actually see the mountains again.  It’s kind of weird and dreary living in a cloud.  It was foggy occasionally in northern IL where I grew up, but not for days on end like it is here.  Gets kind of depressing after a while, but it looks like sunnier days are ahead of us.  Now if my damn internet would work, I’d be happy.

I fell down a few stairs here a few days ago.  I’m fine, just a little sore in places.  Luckily I wasn’t carrying anything, specifically Abbie or one of the dogs, so that was good.  All our stairs here are marble with rounded edges, so they’re slippery when you wear socks.  Lesson learned I guess.  The whole incident kind of freaked me out though.  I keep thinking what if something happened to me while Mark was gone?  It could be days before someone here figured out something was wrong.  What would happen to Abbie if I was passed out or something?  I talked to people here often, but not so much that if I didn’t answer my phone they’d think something was wrong.  I usually talk to one of my parents every day, but sometimes I don’t and miss a few days so they wouldn’t think much of it.  The only person I really have set times to talk to is Mark and I think he’d be the one to realize something was wrong before anyone else, even though he’s pretty much the furthest away at this point.  It just scares me to think that something could happen to me at any moment, and while Mark is gone, I’m not sure anyone would pick up on that quickly, which makes me worry for Abbie’s safety.  I guess I’ll just pray nothing bad happens and hope for the best.

I’ve been working on my quilting some.  For quilt #3, I have all my strips sewn together and ironed and I’m in the process of cutting the strips apart so I can sew them together in a different order. 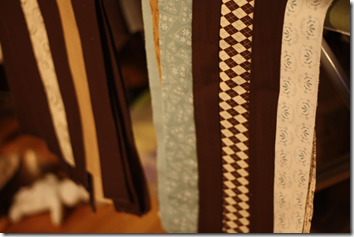 For quilt #4, I have these strips sewn together and now I need to put the sashing and borders on it and the quilt top will be done!  This is a baby quilt so it’ll go together fairly quickly since it’s pretty small. 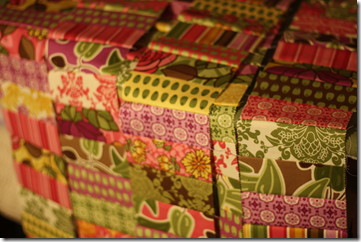 Other than falling down the stairs and quilting, nothing too exciting is going on.  I did order another pair of boots online off of Amazon, so that’s exciting to me (especially since they were over 40% off!!).  I’ll post a picture of them if my internet ever starts working again.  And I’d ordered batting for my quilts from Hobby Lobby at 40% off, so I’m excited to use that too.

I’ve been taking pictures of Abbie every day, but on my iPhone.  I send Mark a picture or two or a video of her every day and the iPhone definitely makes that easy.  But it makes it harder to put those pictures on here since I don’t put my pictures from my phone on my computer very often.  I’ll have to do that sometime soon.

Hope you’re all having a good January!