Well we made it here.  We got up at 1:00am on Wednesday morning to head out.  Although “getting up” isn’t really true since neither Mark nor I could fall asleep.  We just laid in bed for a few hours trying to fall asleep.  Ick.  But we were out the door by 1:30am, on our way to Milan.  Abbie pretty much didn’t sleep at all on the 3 hr car ride there.  She was quiet for part of the time, but mostly she was awake and talking.  Mark drove, I dosed in and out, subconsciously talking to Abbie every time she said “Hi Mommy”, which was quiet frequently.

The hour and 20 min flight wasn’t too bad.  Abbie didn’t sleep at all, Mark and I tried to but didn’t have much luck.  The 30 min bus ride to the train station in Eindhoven was much longer than I expected it to be, and getting tickets for the train to Amsterdam was kind of a pain.  The machines that sold the tickets only accepted credit cards, but they didn’t accept American credit cards.  Luckily pretty much EVERYONE here speaks English (and most don’t even have much of an accent, which is odd) so I asked some lady and she pointed us in the right direction to buy tickets.

(This is the only time Abbie slept during the entire trip.  She zonked out on the bus ride and woke up before we got onto the train, so she only slept about 30-40 mins.) 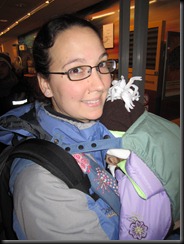 The train ride up to Amsterdam was about an hour long and then we had to take a tram (electric bus pretty much) to our apartment.  The guy that owns this place was stuck in traffic so he was really late meeting us.  We had to wait around about 30 mins for him to get here, but we were finally in the apartment around 12pm.  It’s about a 5 min walk from the tram stop to the apartment and that was probably the coldest I’ve ever been on that walk.  We’re not used to COLD weather anymore since we lived in AZ and it hasn’t been too cold in Italy yet.  It was FREEZING here.  And there was a VERY cold wind coming off the lake that we were walking right into.  Not fun.  Reminded me of Chicago, except we didn’t have hats and gloves for us.  Luckily we did have them for Abbie, but she wouldn’t keep her mittens on and her little hands were FROZEN.  She was crying, Mark was pissed and we had to stop in doorways to get out of the wind about 3 times so we could warm up her little hands and try to shove them in her coat sleeves.  It wasn’t fun, but we survived.

We went to a grocery store to grab us some food and then stopped at a little burger place on the way back to get food to take back to the apartment to eat.  We ate lunch and then got Abbie down for her nap around 2pm.  She only slept for an hour, so I got up with her at 3pm, although I could have EASILY slept for much longer than that.  Around 5pm I finally got Mark up and then we headed to downtown Amsterdam again.

This is a beautiful city and I love it here.  I had gotten very mixed reviews before coming here.  It seems as though people either love it or hate it.  I definitely love it.  It’s very picturesque, the people are incredibly nice, the public transportation system is absolutely amazing and I just love the atmosphere here.  There are a lot of young people here, and there is definitely a “crazy” side to this city, but it’s not overly rambunctious or anything.  It seems as though there are LOTS of stay at home moms.  You see moms out with their kids in strollers EVERYWHERE out by our apartments, which kind of surprised me since it’s so cold, but I don’t think most people use cars very much here.  Bicycles seem to outnumber cars at least 30 to 1, and I absolutely love that.  There are bike lanes all over this city and they even have their own stoplights.  It’s really cute.  And most of them have baskets on the front and little kid seats on the back.  I would absolutely love to live in a city that uses a bike as a main source of transportation.  We made sure to get Mark and me hats and gloves and we were much warmer with those things on.

(This is a playground that must be part of a school near our apartment.  This was taken at 5pm, but every other time we’ve gone by it, it was full of kids running all over the place.) 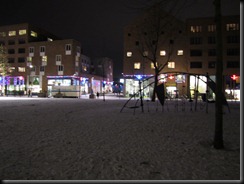 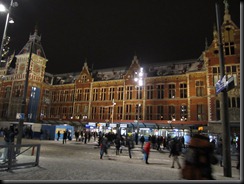 (The downtown area.  Definitely feels like the Christmas season with all the decorations up.) 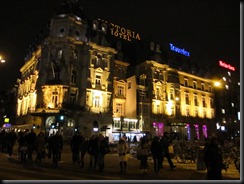 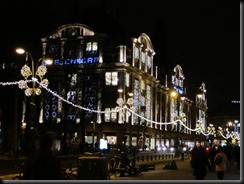 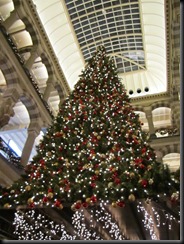 Friday we decided to just wander around the downtown area and get a feel for the city some more.  Our apartment is a 15 min tram ride from the central station and we bought a 3 day pass for the trams/buses for 15E each so we could go back and forth as much as we wanted.

(Mark and Abbie on the tram.) 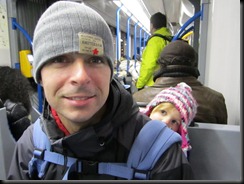 (There are bicycles ALL over the place here.  I love it.  I want one.) 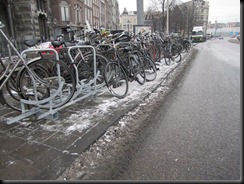 I wanted to see the “Red Light District” since that’s what you hear about most of the time when Amsterdam is mentioned.  (Marijuana and prostitution are legal here.)  We went during the day and I’m interested to see what it’s like at night, but I’m a little nervous.  Mark said the last time he was here, he was offered coke.  (And not the soft drink kind.)  You definitely got whiffs of weed coming out of some of the coffee shops, but otherwise it was pretty tame.  There were lots of restaurants of all types, and lots of coffee shops and it was kinda dirty.  It reminded me of Bourbon Street in New Orleans a little.  By the way, a “coffee shop” is a place that sells marijuana and a “cafe” is a normal coffee shop. 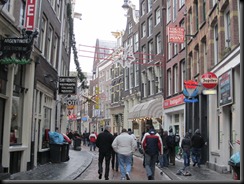 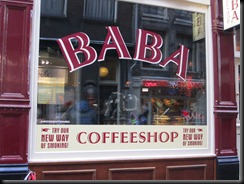 Downtown Amsterdam is full of canals and they are beautiful.  I can only imagine how pretty they’d be in the fall with the changing leaves on the trees since most of them were lined with trees and boats and bicycles.  I could easily live here I think, as long as I had a place with a yard, but I’m not sure that exists.  We passed lots of neighborhood shops – sewing, electronic, bookstores, cheese shops.  I just love the quaint-ness of it all. 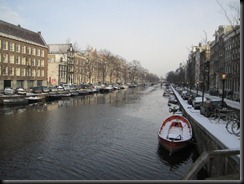 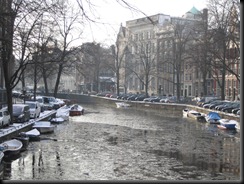 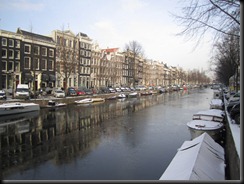 We walked by Anne Frank’s house, and I would love to go into the museum, but I’m not sure Abbie would really go for that.  We went into a small church, and Abbie was in there for about 10 seconds before she started her “AH!……  AH!……” routine.  She loves hearing her voice echo so Mark had to take her out right away.  She lets you know when she’s ready to go because she says “bye bye” and “all done” over and over and over.  She does great when we’re outside walking around, but she doesn’t do too well in confined spaces so we’ll save it for our next trip here because I’d definitely like to come back someday. 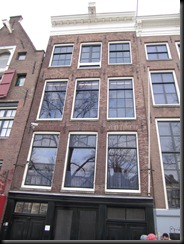 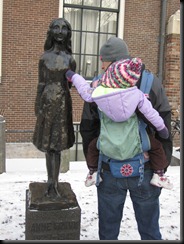 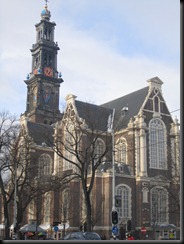 I’ve decided that renting apartments is definitely the way to go when we travel.  It’s just so much easier to have the comforts of a home when you’re traveling with a little one.  Abbie having her own bedroom lets us all get sleep and I love that it gives you a different feel of the city.  We’re staying in a trendy part of town with lots of new development, but there are lots of families here, and we get to see a side of Amsterdam that we’d never see if we weren’t staying out here.   Here are a few pictures of our apartment. 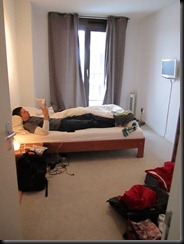 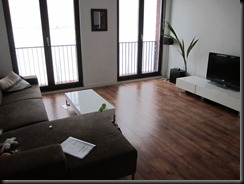 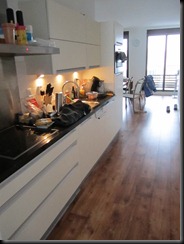 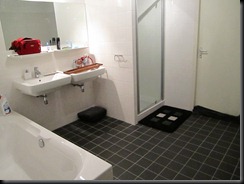 Overall, Abbie has done great so far.  She slept 12 hours for us last night and didn’t wake up at all, which surprised me.  And she’s been napping for almost 2.5 hours currently.  I’ll probably go wake her up soon so she’ll go to bed at a decent time tonight.  She really is a good little traveler, which is good.  I don’t think most 18 month olds have been to 8 countries, but our pippers has!  (Actually, I don’t think most people in general have been to 8 countries, but she’s been to 7 countries in the past 6 months!)  Mark and I were talking about how lucky we are today when we were strolling around.  We both always wanted to travel, but I figured it would be when we retired, not now.  We’re really lucky we get to live in Italy for 3 years and have all these amazing travel opportunities.  It’s too bad Abbie won’t remember any of it! 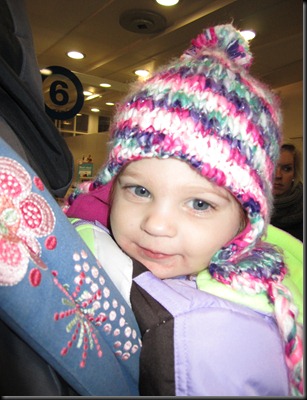