Sadie is our 3.5 year old wire-haired Dachshund.  She might be mixed with a little bit of terrier, and we got her on the side of the road in Oklahoma from a couple out of the back of their truck.  I had wanted an English Cream long haired Dachshund, but they were $500+ and we didn’t want to spend that much on a dog at the time.  So we got Sadie.

Sadie is Abbie’s best friend.  Abbie loves her, and Sadie is extremely good with Abbie.  Sadie also got hit by an SUV in 2009 when she took off after a roadrunner.  Ugh. 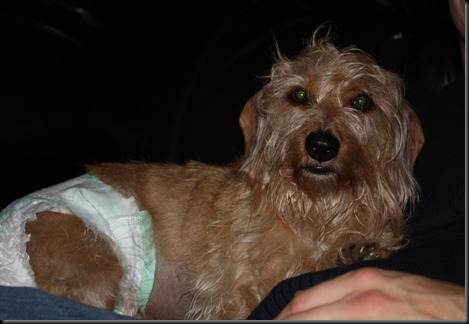 I noticed Friday that Sadie was acting a little odd.  She moved a little funny and just wasn’t acting like herself.  But Sunday night, she was acting really strange – laying in a corner, avoiding people, and her whole body was shaking.  I started to get worried and tried to find an emergency vet, but conveniently, the base vet doesn’t have any sort of emergency vet.  They give you a list of vets in the area that do have emergency numbers but all their messages were in Italian so I couldn’t understand what they were telling me to do.

Monday I got up early to take Sadie to the vet on base, only to drive all the way there  and have them tell me that the vets are all out for the entire week.  Go figure.  So I called an Italian vet at 10am (because that’s when they open) and they said to bring her over around noon.  I took Sadie to Dr. Conforto in Sacile and she looked her over and pressed on her back and couldn’t really find anything wrong besides her having a slight fever.  She told me to watch her and if she got worse to bring her back in.  Sadie remained the same thru Tuesday and Wednesday evening she looked like she was getting worse.  So I took her back into the vet at 6:30pm Wednesday night.  They ran a full blood scan on her and did an ultrasound on her because they thought that there could be something wrong with her stomach or intestines, but they didn’t find anything on the ultrasound either.  They gave her an anti-inflammatory shot and again told us to keep an eye on her and bring her back if anything changed.  Thursday Sadie was back to her normal self.  She was playful and had a little bounce in her step and wanted to be by us so I was hoping the worst was past, but I was wrong.

Friday morning, Sadie was acting really stiff and not wanting to move much so I took her back to Dr. Conforto.  Again, she felt her back and tested her reflexes and didn’t find anything wrong so she told me to watch her and bring her back Saturday morning if she wasn’t better.  I took Sadie home, and took Abbie to a Halloween party on base.  By the time Abbie and I got home around 2pm, Sadie pretty much wasn’t using her back legs at all.  She could hardly stand up for more than 1-2 seconds without her back end flopping over to one side or the other and basically her entire body was bent a little bit.  I started freaking out a little bit (or maybe more than a little bit) and called half the people in our squadron and Brittney trying to find someone to watch Abbie so I could take her back to the vet.  No one was available to watch Abbie, although Brittney would have come all the way back here from base to watch her, but I tried plan B first.  I called Dr. Conforto’s personal number that she gave me and she told me to take her in to the clinic and have someone else look at her at 4pm because she was out of town and wouldn’t be back until Monday.  I didn’t really want to have someone else look at Sadie, especially since it’s hard going to an Italian vet who’s English is limited and my Italian is pretty much non-existent.  I called my friend Jordana, asking her if she could watch Abbie and she gave me her vets personal cell number and told me to call him.  So I called Dr. Levine, who is an American that owes a vet clinic here.  This whole time I’d also been in contact with Donna, Mark’s mom, because she works at a vets office in the Chicago area.  She was relaying the info I was giving her to a vet at her clinic and giving me his recommendations, which was to get her to a vet asap.  Dr. Levine told me to bring her over and he’d check her out.

When we got to Dr. Levine’s (Abbie was with me – I had her strapped on to my back in the Ergo and I was hauling Sadie around in my arms), he gave us two options.  One was to try to give her a shot with a high dose of steroids and see what happens, or two was to send her to a doctor in Palmanova who would do a dye test on her back and do surgery if she needed it.  The price for option one was around 20Euros, and the price for option two, if she ended up needing surgery, was going to be around $2500.  …. Yikes….  Mark, naturally, wasn’t available to talk to during most of this so I was making these decisions on my own.  Obviously if we could go the cheaper route I wanted to do that, but if it was going to risk damaging her back permanently, then we’d have to go with option two.  Dr. Levine said that most people try option one and sometimes it works sometimes it doesn’t.  I decided to try option one and she how she handled the shot, but Dr. Levine called the doctor in Palmanova just in case she ended up needing surgery to make sure he was available, which he was.

Sadie improved quite a bit overnight though, with the shot.  By morning, she seemed less stiff, and could bear weight on her hind legs for 10-15 seconds before falling over, and she could even take a few steps if we let her.  We took her back to Dr. Levine Saturday morning and he said she’d made great strides so we could try putting her on steroid pills for the next week to see how she does.

So that’s where we are with Sadie-roo right now.  She’s still improving and I just gave her her first dose of pills.  We’re supposed to watch her for a week and contact Dr. Levine on Friday to let him know how she’s doing.

Thanks so much for all of your prayers and concern!  She’s not out of the woods yet, but she’s still improving which is a good thing!  I’ll keep you all updated! 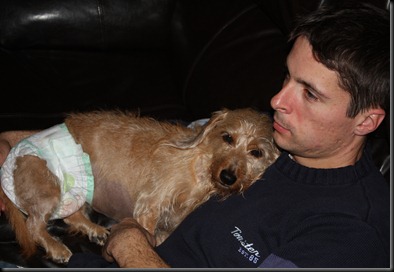 I'm happy Sadie is improving, and fingers crossed she continues on the path to a full recovery!!!