(That’s our nickname for Abbie.  Pippy Magee.  Or Pippers.  Or Pips.) 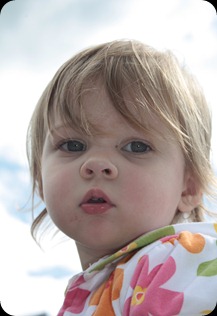 Abbie’s vocabulary as been growing by leaps and bounds in the past week or two.  She tries to repeat anything you say, and usually does a pretty good job of it.

Some of her recent sayings are:

She ALWAYS wants to walk, and she prefers holding on to your finger while walking around the living room.  Any time I sit down, I can almost guarantee she’ll be pounding on my leg yelling “walk!” in a matter of seconds when I sit down.

So I must have said s-h-i-t once in front of her when I dropped something, or maybe Mark did, or maybe the babysitter.  I’m not sure who said it, but now anytime she drops something she says something that sounds VERY similar to s-h-i-t….  I’m not quite sure how to break her of that.  I usually get her to try to say “shoot” or “oops” or something else.  I’m not 100% sure that’s what she’s saying, but it sure as heck sounds like it, which is kinda funny, but pretty much not.  Her grandma is coming in 3 days so we need to break her of this habit pronto!  Otherwise I’m blaming it on Mark.  =)

The other day I was making dinner and she reached up on to counter and grabbed my sharp kitchen knife off of it.  I even had it about 4-6 inches back from the edge, and not on the cutting board because I know she has quite the reach on her, but really?  Thank God I was right there and got it out of her hand before she got her.  It scared the crap out of me.  It doesn’t help that I have about a square foot of counter space to use and she apparently can reach the front half of it.  She’s also grabbed scissors off of our pub height table.  Since when are 16 month olds tall enough to grab things off of counters and tables WITHOUT climbing on anything…  She definitely keeps us on our toes.

Every day when she gets up from her nap she starts asking for daddy.  Unfortunately he usually doesn’t get off work for another 2-3 hours after she gets up from her nap, so she runs around asking for him for quite a while, but it’s pretty cute.  She always wants to look out the kitchen window to see if daddy is there and if she hears a car pull up so runs to the window with her arms in the air so I can pick her up screaming “daddy!”.  She definitely loves her daddy.

She’s been running around all day trying to put Mark’s hat on the dogs or holding the phone up to their ears so they can “talk” on the phone.  Luckily they’re both pretty good sports about it.

She shouts “jet” now any time she hears or sees a jet.

Now she randomly runs around “shimmying” her shoulders.  (How on earth do you spell that??)  She shakes them back and forth really quick.  At first I thought it was some weird tick she’d acquired, because she’d do it at the most random times when she looked like she was zoning out, but she’ll do it on command too.  If she doesn’t like dancing when she’s older, I’ll be shocked.

Today on the way home from church Mark was snapping his fingers.  Abbie’s been trying to figure out how to snap her fingers for a while and today she was doing the motion with her hand and making the noise with her mouth.  That’s close enough I suppose.  =) 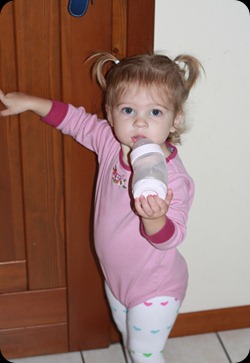