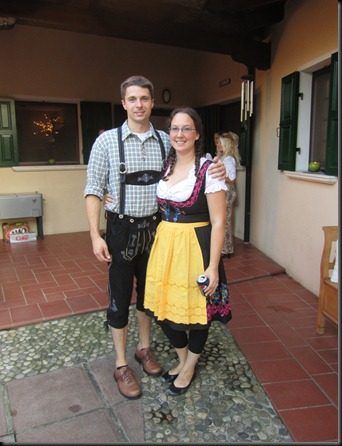 Last night the squadron commander and his wife had their annual party with an Octoberfest theme.  Dirndl and lederhosen were the required attire, which is why we stopped by Munich to buy some on our way home from Prague.  Last night was their big début and it was a lot of fun to dress up.  We got some HILARIOUS looks from people driving by as we were walking to the party though.  We know we looked funny (especially in Italy – we probably would have fit right in in Germany) but that was kind of the point.  It was a lot of fun to get out and spend time with friends.  We’re looking forward to the squadron Christmas trip to Austria where we get to wear these during one of the parties.

Here are a few pictures of me with my beautiful friends, Sara and Cassy. 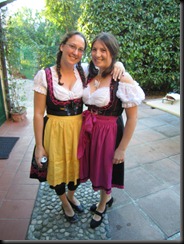 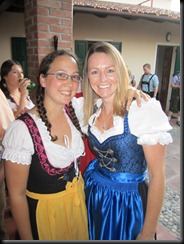 Mark’s squadron commander’s wife found us a babysitter since I wasn’t having any luck.  Commander friends of theirs have an almost 15 year old daughter named Victoria, who was willing to watch Abbie for us while we were down the road at the party.  I was nervous about leaving Abbie with a 14 year old, mainly because I didn’t remember what the maturity level of a 14 year old was like.  I’m not around many teenagers and it sounded young to me, but we didn’t have any other options.  But Victoria was GREAT.  She seems very mature for an almost 15 year old and she did really well with Abbie.  Abbie didn’t even cry when we left for the very first time, OR when we got back.  It was a huge relief for us and Victoria said she’d love to watch Abbie again so I am super excited about that.

When we got back to their house, we found Abbie dressed like this: 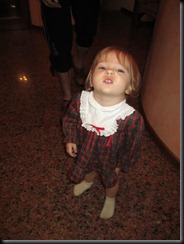 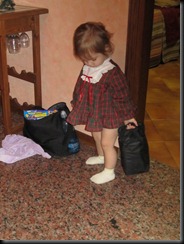 We both thought that she was just playing dress up with Abbie.  Haha!  Turns out that Abbie got in to the dogs water bowl and got her clothes all wet and I didn’t have another outfit for her in the diaper bag (lesson learned on that one..) so this is all she could find to put Abbie in.  (There was a onesie in her bag but I guess it was buried.)  It’s an American Doll outfit.  HAHAH!  We cracked up!  But Victoria did great with Abbie and Abbie was super tired (1.5 hours past her bedtime) but completely happy when we picked her up.

On a side note:  Abbie apparently takes after her dad and me because last night she was “talking” in her sleep quite a bit!  She went through her whole repertoire of words and we heard mommy, daddy, puppies, Ollie, Sadie, horse, moose and a few other words amongst all her muttering.  At least she wasn’t screaming like she does sometimes in her sleep.  That startles the heck out of me!

Haha the American Girl Doll dress cracks me up!!! And if it makes u feel any better, i know times have changed a bit, but the summer i turned 10 i started babysitting a 4 month old 3 days a week while his parents were at work, and both weekend nights while they went out! So almost 15 is a really good age for a babysitter- mature enough, but young enough that they still want to babysit and not just do stuff with friends. -Rachel

Your dress is ADORABLE!!!!! Can you wear it without the apron so it looks more "normal"?

I LOVE the American Doll dress story. Too funny!

Lots of great outfits (even Abbie!) Loved this post.