Mark and I have been on three days, just him and me, since Abbie was born (16 months ago…).  The first one we went out to dinner and walked around West Gate in Phoenix while friends watched Abbie.  The second one was Mark’s mom’s gift to us – she watched Abbie for us while we took the train downtown Chicago and saw a Cirque du Soleil show.  The third one, which happened on Saturday, we went to Venice!!

Our friends Cassy and Luc came over to our house around 4:15pm and I gave Cassy the low-down on Abbie’s routine, which took 20 mins….  Mark and I left a little bit later than planned, but we got to the Sacile train station on time for us to buy our tickets and snap a few pictures before we jumped on the train. 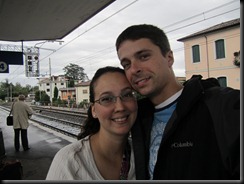 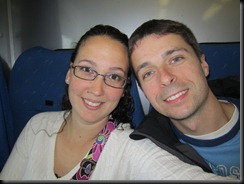 It’s amazing at how much more fun it is to travel to Venice without Abbie.  Don’t get me wrong, we love her to death, but trying to keep a VERY active toddler entertained and seated for an hour on the train is a full time job for 2+ people.  It was SO nice to be able to sit back and relax and actually talk to each other and enjoy each other’s company.  Mark studied a little Italian, I did a Sudoku puzzle in between our chatting and looking out the windows.  There was no trying to keep Abbie from screaming or blocking her off from the aisle or keeping her from disrupting other passengers or pointing things out to her to keep her attention.  It was wonderful! 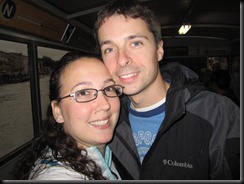 We got to Venice just after 6pm and decided to take the water taxi to the other side of Venice to San Marco Square.  It was our first time riding the water taxi, so it was really fun seeing a different side of Venice, despite the fact that it was cold and rainy.  We passed the cruise ship terminal and talked a little about the cruise we plan on taking next year.  And we watched 2 tugboats tow a Costa cruise ship through the canal. 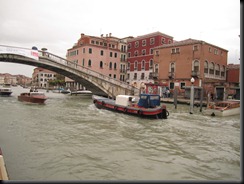 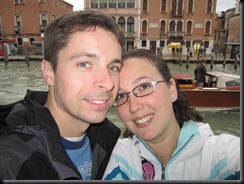 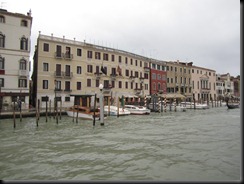 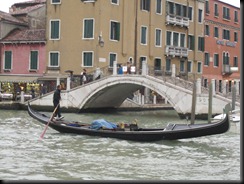 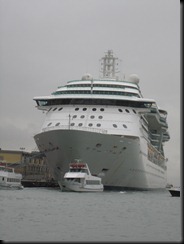 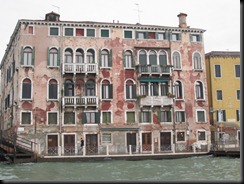 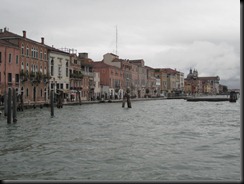 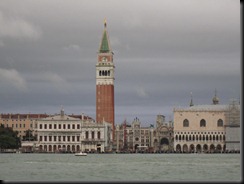 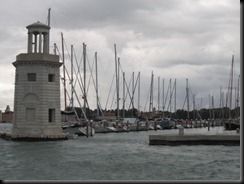 Once we got to San Marco Square we wandered around just a bit, and relished the fact of neither of us having to carry Abbie or a backpack on our backs.  I told Mark there was much more bounce in my step, literally, because I didn’t have a 25lb toddler on my back. 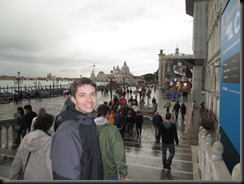 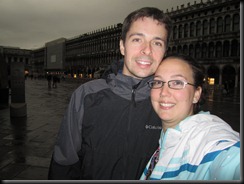 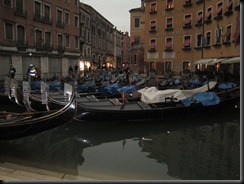 We decided to eat at the Hard Rock Cafe because we were both craving big, juicy burgers, and pretty much no place in Italy sells hamburgers, except for American chains.  Plus they actually have fountain Pepsi (my favorite) and they serve the drinks with ice (most places here don’t) AND you get free refills (which is unheard of in Italian restaurants).  Plus we discovered this visit that they have a 15% military discount, which was great. 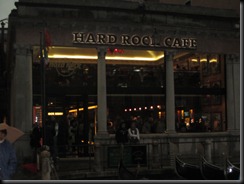 The Hard Rock Cafe in Venice is probably the smallest Hard Rock anywhere.  I’ve seen McDonald’s over here that are bigger than this Hard Rock, but I guess it’s hard to have a huge restaurant in a place like Venice.  It was rather cramped quarters, but that was okay because since Abbie wasn’t along, we didn’t have to worry about her disrupting other people and screaming and throwing her food everywhere, like she tends to do.  (Anyone have ANY idea how to get her to stop throwing food???)  The food was good, the service was great, and the company was unbeatable. 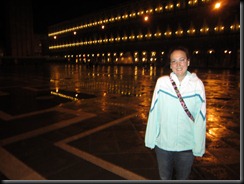 (See that big puddle behind me to the left?  Yeah, that’s the one I walked waded through…)

After dinner we decided to stroll back to the train station, which is about a 30 min walk if you’re speed walking.  I think we took an hour – did a little window shopping, took a few pictures, I stepped in a HUGE puddle in San Macro Square and soaked both my shoes and socks.  But luckily my feet didn’t get cold and it wasn’t too bad, besides having squishy shoes.  Luckily the rain held off so we didn’t even have to use the umbrella’s we’d brought with us. 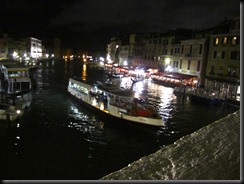 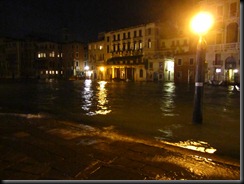 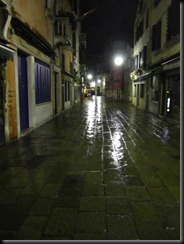 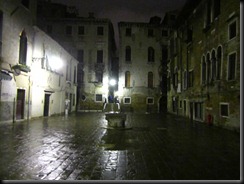 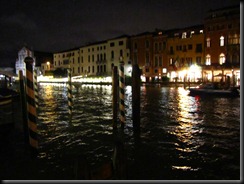 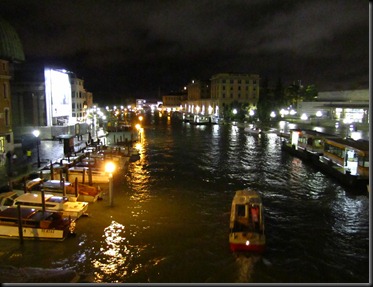 Overall, the night was so relaxing and fun.  We laughed a lot and I haven’t had that much fun in a while.  It makes me want to go on dates with my husband MUCH more often than we have been.  If we could turn this into a monthly thing, that’d be great!  And obviously not all the dates have to be as extravagant as going to Venice, but that certainly was a fun first date in Italy.  =) 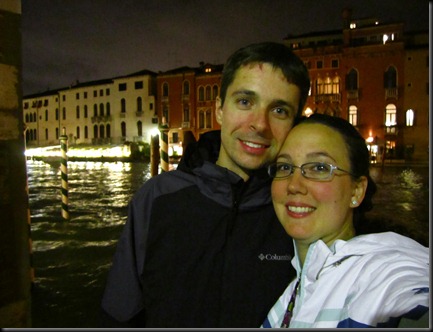 Remember you will have a babysitter the first week in October. So you better plan your date night. Donna

how nice it must be to have a date night in Venice! You lucky bums. The last picture of you and Mark has the most fantastic lighting. I love it!