I guess I had sort of a reality check just now.

Single parenting can be very difficult.  I think it definitely depends on the child’s personality and the parent’s personality – not everyone’s experiences are the same and there are many variables to factor in.  I think Abbie is in her most difficult stage yet, because she’s learning SO much and she understands so much, but she’s still a baby.  Or toddler.  Or whatever.  She can’t convey what she wants well at all, and she’s EXTREMELY clingy to me.  I don’t get a break from her at all.  The person that I emailed a few times about babysitting, never responded to my last email.  I’m just exhausted.

I read another military spouse’s blog recently and it was all about how some military spouses give the rest of them a bad name because of their complaining when their husbands are gone.  She was saying how people need to find ways to keep busy while their husbands are gone and to put on a happy face for their husbands when they talk to them so they don’t worry about their wives.  I can only hope she ends up with a child exactly like Abbie so she’ll realize that blanket statements like that just don’t always apply to everyone.  I would LOVE to have hobbies to keep me busy, but the only time I get to do them is when Abbie is asleep.  And usually when she’s asleep, I’m ready to crash on the couch and watch TV or go to bed.  I have an entire room full of toys for her, but when I’m around, she wants me to be her playmate and won’t play with her toys more than 5-10 mins by herself at a time.  It’s really hard to do ANYTHING in 5-10 min increments.  Reading her blog just was an eye opener to not be so judgmental of others.  We all have our own situations and our own ways of dealing with things.  I, personally, would be really pissed if Mark willingly put his flying career in front of our marriage and CHOSE to leave us behind and go do his own thing for however long.  But I know Mark would never ever do that because he, too, thinks that’s ridiculous.  Different strokes for different folks.

I just came across another military spouse’s blog.  I don’t know this girl at all, just found her blog on one of the spouse support sites I’m on.  She lost her 18 mo daughter to SIDS basically (but it’s not called SIDS, I just can’t remember what the toddler version is called) earlier this year.  Her blog is a few posts of her absolutely pouring her heart out about the loss of her daughter.  I sat here and cried for 20 mins reading her blog.

I was talking to Mark last night, and he said something like “well we’ll be in Prague soon and we’ll have a nice relaxing time there”, and all I could think about was, my vision of “relaxing” right now has absolutely NOTHING to do with Abbie.  Which is terrible, but it’s true.  Prague will be great, I’m sure, but Abbie gets harder to deal with by the day, and it’s going to be an effort to keep her happy and quiet and on her schedule, which isn’t exactly “relaxing” to me, but at least there will be 2 against one then.

I love Abbie with all my heart.  She’s the best thing, besides Mark, that every happened to me, and I am so thankful that I get to stay home with her and raise her myself, even if being a SAHM is a very thank-less, often overlooked, job.  Reading that girls blog about how she’d give anything to hold her daughter one more time just absolutely broke my heart and slapped me in the face at the same time.  I CAN hold my daughter and I do get to see her smile again, and hopefully, God-willing, I will get to watch her grow up.  I need to start focusing on that, instead of how hard she is to deal with and how much I don’t get to do because I have her.  I know for a fact that girl who lost her daughter would give anything in her power to be in my shoes right now, so maybe my shoes aren’t that uncomfortable after all. 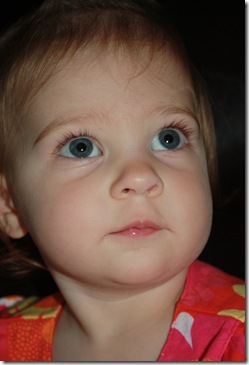