Abbie and I have been keeping busy since her daddy has been gone.  Or maybe I should say, Abbie has been keeping me busy.  This little girl is constantly on the go, and rarely slows down. 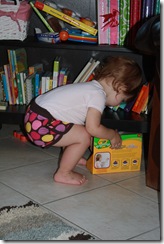 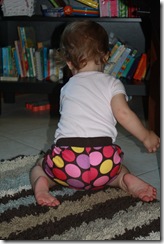 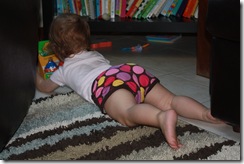 Abbie has been getting so much better at following simple directions lately.  I can say things like “Go give your bear a kiss”, and she’ll go dig her bear out of her toys and give it a kiss.  She’s really starting to understand a LOT of what I say.  She still gets “screamy” occasionally, but now I ask her what she wants when she screams, and that usually stops her.  She’ll try to point at what she wants, or she’ll say “help” (which sounds more like “hep”), or say “up” or “down” or “eat”.  If she doesn’t say anything I can ask her questions like “Do you want to get on your pony?” and she’ll shake her head yes or no, and we get through it by process of elimination. 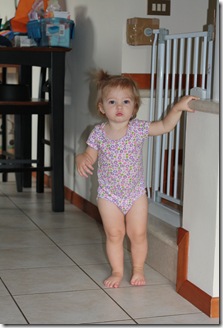 Considering all the sleep problems we had with her earlier, I am amazed at how well she’s sleeping now.  I will ask her now if she wants to take a nap, and usually she does.  (Granted, I usually ask her when she’s starting to get cranky.)  But she goes running over to the gate and waits for me to get her milk for her and I change her diaper, give her a kiss, and put her in bed, and usually she says there for at least an hour or two.  She’s down to 1 nap a day though.  At bedtime, I’ll ask if she wants to go take a bath, and again she runs to the gate signing bath, and when I ask her if she wants to go night night, she usually says “nigh nigh” and goes to the gate.  I read her a chapter in a book (we just got done reading Black Beauty), turn the light off, rock her for a few minutes and then put her in bed and don’t hear a peep from her until morning.  (Watch, tonight she’ll wake up and scream in the middle of the night…)  She’s been going to bed around 8:30pm and gets up around 9am. 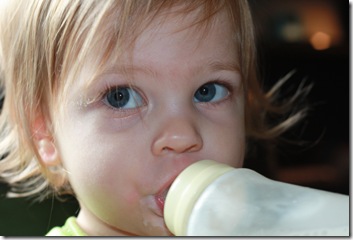 The other night I made popcorn around 7:30pm and went and sat on the couch with it.  Abbie was climbing up there as soon as I sat down and signing that she wanted some too and saying “bite”.  I’d break tiny pieces off and give them to her and a few times she’d stick her hand in the bowl and grab a handful of popcorn and get this big grin on her face.  I was laughing at her, and she started laughing at me because I was laughing at her.  We were having a good time, and that was the first time I felt like Abbie was keeping me company and that we were just relaxing together, instead of me being in constant “parent mode”.  Abbie and I have lots of fun together every day, but this time it was just different.  Maybe it’s because she rarely sits still.  I don’t know.  We just had a moment and I wish Mark had been there also. 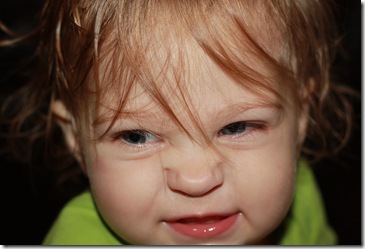 She has 12 teeth now.  I need to trim her hair, but I’m afraid I’ll make her look ridiculous, so I’ve avoided it.  In addition to the other body parts she knows, she now also knows her teeth, mouth, and cheeks, and sometimes toes.  She’s learning fingers too and sometimes she’ll stick out her finger if you ask her where her fingers are.  And she loves to play peek-a-boo.  She giggles like crazy when you chase her, but that always makes me nervous since we have tile floors, but so far so good.  I need to take her in for her 15 month shots, but I’m going to wait until Mark gets back in case he wants to go with us. 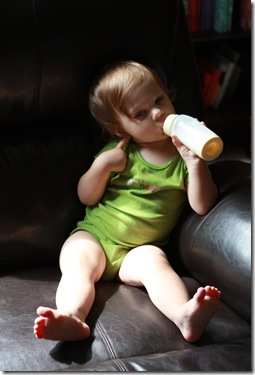 Your daughter is gorgeous, you are very blessed. Thank you for your comment.