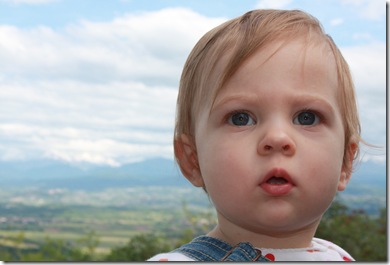 We had Abbie’s one year appointment today.  Again, thank the Lord that the friend He sent me, Brittney, was willing to go with me.  That girl truly is a gift from God and I am SO thankful that we met each other online and hit it off right away.  (I am very thankful for all my friends who are reading this too and send me letters and emails to make home seem not so quite as far away.  Love you all!!)

The whole appointment was slightly traumatic for both of us.  I like her pediatrician here, but she’s obviously not for delaying vaccines like I have been doing with Abbie so far.  She said the decision is ultimately up to me, but then put the fear of God into me.  I hate it that Mark isn’t here to help me make these decisions right now.  Luckily Brittney was, and she’s an RN.

So Abbie is 31.5” long (95+%), weighs 21.11lbs (between 25-50%) and her head circumference is 42.5inches, and I have no clue what percentile that was.  The doctor visit was really quick because she was late for some meeting I guess, but she said overall she’s right on track and doing really well.

So then came the shots…  I’m following Dr. Sears delayed vaccination schedule, or I had been anyway.  His schedule says to get the polio vaccine and the mumps vaccine at 12 months, instead of the 5 that the CDC recommends…  I’m just not comfortable pumping her full of that many “things” all at once, especially considering that one of those 5 could have been the MMR shot, which is 3 in 1.  Well they don’t have vaccines for measles, mumps and rubella separately anymore, it’s all or none.  So after much deliberation, I decided to go with the polio vaccine (her 2nd one) and the MMR, which is a live virus vaccine.  I don’t know if I really believe that the MMR vaccine causes autism, but I’d be lying if I send it didn’t worry me a little bit, even if it has been proven that it doesn’t.  So she gets 2 shots, one in each leg, and she screams, but she got over it quickly.  That part wasn’t too bad, it was more the deciding what to do without Mark’s input that was hard for me.

The blood draw, however, was a different story.  I guess they drawn blood on all 1 year olds to check for anemia and they take it from their arm.  So we sit down in the chair, her on my lap and they put the little bar down and she’s already getting tense from the 2 people hovering around her, no matter how big they were smiling.  So I’m supposed to bear hug her and keep her other arm tight against her, and one technician holds her other arm while the other one draws blood.  They put the tourniquet on her tiny left arm and she pretty much looses it, and then I, in turn, loose it.  They’re feeling around her little arm for a vein, she’s screaming, I’m in tears… It just wasn’t good.  So they decide that that arm wasn’t good so they put the tourniquet on the other arm, and she screams even louder, and then her cries turn into big sobs and she keeps looking at me with her big blue eyes like “mom, why are you doing this to me?”, and I feel like an idiot because I’m sitting there hugging her against me with tears running down my face, but I couldn’t help it.  I know it didn’t hurt her that much, but I know she was scared and I had to keep her in that uncomfortable situation.  Again, thank GOD Brittney was there.  She did her best to distract Abbie for me and helped me with Abbie and the diaper bag and purse and grocery cart and packages, etc, all day.

So Abbie got over it pretty quickly, more quickly than I have obviously since just writing this makes me tear up again.  I’m hoping she doesn’t have any sort of reaction to these vaccines, but the guy that gave them to her said that them having a reaction (getting a fever, being drowsy, etc) is actually good bc it shows that they’re building up an immunity.

Anyway, so that’s the saga of her 1 year appointment.  I’m glad it’s over… 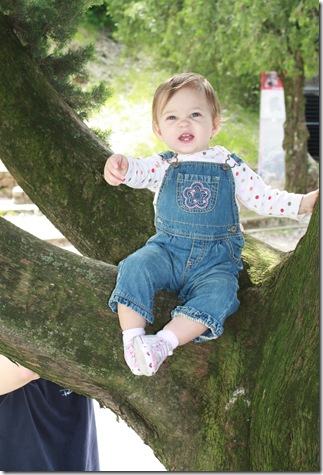 Sorry you don't like your new doc as well. I don't suppose you have much of a choice over there, huh?

Sierra hasn't gotten the MMR shot yet (she will at her 2 year). We had the same reasoning as you: we just wanted her to be a little bigger. It's true there's no evidence of a link between MMR and autism, but I do have a little trepidation about it. Weird about the blood draw, though. No one ever even mentioned something like that to us at Sierra's one year. Glad you all survived and your friend was there to help you out!!

You poor thing!! I always felt like a murderer when I had to keep little ones strapped down for stuff like shots and blood draws- and they weren't even mine!! But I'm sure glad it's over for you both :)