Made it to LA

We’ve made it to LA.  We drove here yesterday.  Left Phoenix around noon, stopped for lunch and got here around 7pm.  We hit rush hour traffic coming in to LA, which slowed our progress quite a bit.  Abbie slept at least 4 of the 6 hrs in the car.  She did REALLY well on the car ride.

We managed to get everything in to our Passat, but I’m fairly sure we couldn’t have fit anything else in there.  Things were VERY tight, but we made it and that’s all that matters. 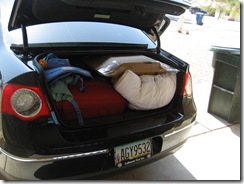 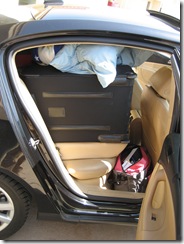 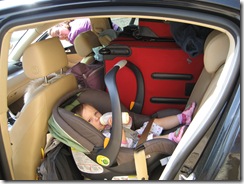 I held both dogs on my lap most of the way, but Sadie sat on the bags in the back for quite a while also.  The rest of the car could have been empty and the dogs would still be on my lap.  They’re lap weinas.  Sadie is a pretty good co-pilot. 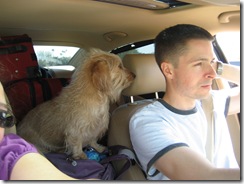 On the way here we passed through an area with more windmills than I’ve ever seen in my entire life.  It was this picture below times about 20.  They were EVERYWHERE for at least a few miles, in all directions.  It was pretty neat! 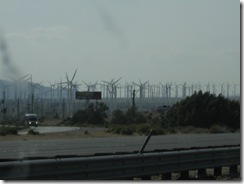 And after the windmills we passed through these neat hills.  It made us think of Ireland.  Everything was so green, even in AZ, because of all the rain we’ve gotten lately.  (These pictures are taken on my little camera, not my DSLR.  That one is packed safely in our luggage and I didn’t feel like dragging it out.) 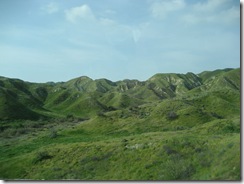 We’re hoping people realize that we’re not just in LA for the weekend…  Well, we are, but then we’re off to Italy.  Here’s the luggage cart with all our junk on it.  And the dog crates are even broken down!  Leaving is going to be even more interesting..  But at least we’re able to tackle all this together, so I’m not going to complain.  We can deal with it.  It is kinda funny though.  We seriously look like a modern day version of the Beverly Hillbillies.  We got the rental car today and the “luggage carts” are smaller than grocery carts…  We’re going to need about 4 of them to haul all our junk.  We’ll just allow extra time for multiple trips. 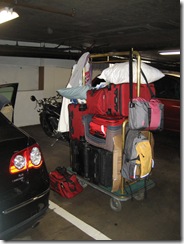 So last night was not at all good.  We’re at a La Quinta, and we were in a room with a king bed… and a crib, and 2 dogs crates, and ALL of our junk, which left very little room to move around in.  Abbie did not sleep well at all, which means, neither did we.  Mark got her to sleep around 10pm, and she was awake and screaming around 11pm (right after I fell asleep).  We tried for a good hour and a half to get her to go to sleep again in her crib, with no luck.  We tried moving her crib next to us, against the wall, by the door, rearranging the furniture each time, and nothing worked.  Finally I laid her down and nursed her and she fell right asleep.  So she slept in between us, which still means that we didn’t sleep much.  The kid is a wild banshee in her sleep.  She moves SOO much.  (What exactly is a wild banshee anyway??)  Mark and I both got kicked, bonked or slapped in the head multiple times, and when she wasn’t moving around, I still woke up to make sure her face wasn’t in a pillow.  Not our idea of fun.  So this morning I asked if there was any way we could upgrade to a suite, and they upgraded us for $5/day extra!  So now she’s in the living room area, and we’re in the bedroom, and hopefully it’ll work out better for everyone.  None of us sleep well when we’re all in the same room.

Oh, and we’ve used the Ergo a TON during the move and traveling.  I’m so glad we got that thing! 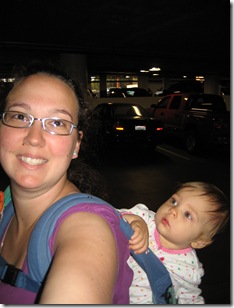