A day of shopping

We started off at Ann Taylor Loft (LOVE that store!!!).  They were having a 40% off the entire store sale, and I got a short sleeve button up shirt, a pair of jeans, a pair of longer shorts, and 2 pairs of capris, all for $125!  (She also gave me an extra 20% off because I asked her if they had a military discount.  She said they didn’t but she’d do something for me – and that was give me an extra 20% off.  NICE!)

Then we went to Gap and I bought a pair of cargo capri’s and a shirt.  Then we went to Carter’s…  I could spend hundreds of dollars in that store, easily, but I only spent $18.  I got Abbie 2 pairs of shorts and a onsie – all 12 month sizes.  Then we went to Osh Gosh B’gosh (did you know they’re owned by the same company as Carters?) and I got her an adorable pair of pants and a shirt (size 18 mos).  Then we went to a book store and I got a few books on Italy and Eastern Europe and I bought Mark a book on Ben Franklin.  (He’s been wanting to learn more about him for some reason.)  At that point I said I couldn’t go in any more stores there because I knew I’d find other things I wanted to buy and I didn’t want to spend any more money.  But we stopped at TJ Maxx on the way home, and I bought Abbie 2 24 mos outfits, 2 Sandra Boynton books for Abbie, a pair of kitchen scissors and a box of cards (the kind you write on).

It was fun, but strange, to be away from Abbie for that long.  I’ve only been away from Abbie for that long (about 5 hours) less than a handful of times since she was born.  I’ve kind of lost who I am a little bit since she’s been born.  She requires so much attention that it’s hard for me to do anything else but be a mom.  She’s getting much better now though.  I can kinda do my own thing now as long as the baby gates are up and she’s in the same room.  I can play the piano or write letters or blogs or whatever.  I couldn’t do those things before unless she was asleep or being watched by someone else.  So it was nice to step out of mom role for a while and just shop.  And Mark had a lot of fun with our pippers.  He came home from work for lunch today and said he missed Abbie a lot since he didn’t get to see her before he left and he’d spent a lot of time with her yesterday.  They’re so cute together. 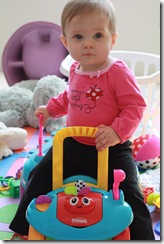 Abbie on her new toy.