After watching Craigslist like a hawk for the past few weeks, our lucky day finally arrived.  I’ve seen a few Burley’s offered on Craigslist, but I debated about whether I wanted to spend that much money on a used bike trailer.  The Burley’s are about $350 new and they’ve been about $150-$200 on Craigslist.  Previously, by the time I decided I wanted one, they’ve been sold, and ever since they’ve been sold by the time I contacted the seller.  The things sell like hotcakes.  (What exactly is a hotcake anyway??)  So I saw one for sale for $150 on Sunday night.  I emailed the guy right away and heard back from him Monday morning.  I called him and he told me someone was coming to look at it that afternoon and that he was sure whoever saw it first would buy it.  I kinda figured that was going to happen too, so the race was on.  My mom and I got ready in record time and Mark printed the directions to his house and we were on our way.  We beat everyone else there and bought the thing.  He showed me how to hook it up to a bike and how to take the thing apart and fold it flat.

We hooked it up to Mark’s bike as soon as we got home and Mark took Abbie for her first ride.  Here are a few pictures. 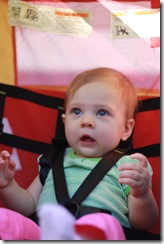 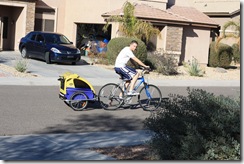 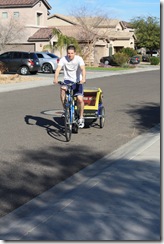 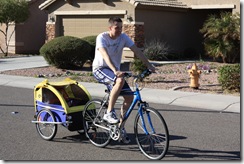 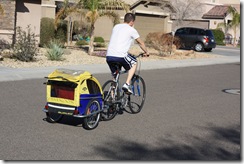 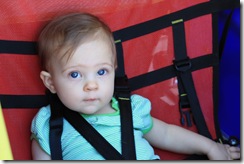 I need to get her a helmet before she goes for a “real” ride, but she seemed to like it.

Today my mom and I rode the bikes with the Burley down to the grocery store to get a few things.  My mom rode my bike and I rode Mark’s (which is pretty tall for me) pulling the trailer.  You can’t even feel the thing back there!  Even with all the groceries in it, I couldn’t feel it.  I’m SUPER excited about putting Abbie in it.  I think she’ll love it.

So Mark and I are both really excited about this purchase.  It’s a Burley D’Lite – which I think is their top of the line trailer.  I hope we get many miles and years of use out of it.

Ooh I have never heard or seen one. You are making me want one!!! But I need a bike first. ;) She looks SOOOOOO cute in it!