I haven’t posted in a while, and because of that, I don’t even know where to begin.   So I will begin with a picture of  my most adorable baby. 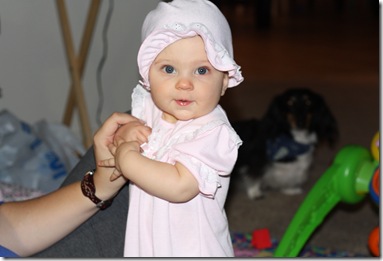 Our life is absolutely crazy right now.  Trying to figure out this OCONUS (military term for outside continental US – aka overseas) move is like trying to find a needle in a haystack.  In the dark.  It’s ridiculous.  Mark has a 7 page list of stuff he has to get done before the move and to get his orders cut, and that’s just on the military side of it.  It doesn’t include any of the logistics of moving our junk over there, getting the dogs and cars and us over there.  I spent a lot of time yesterday trying to get us hotel reservations here in Phoenix, in LA, in Baltimore, and in Germany, and then trying to get the dogs on our flights with us, etc.  It’s exhausting.

I need a damn dental clearance to go overseas, along with a medical clearance, which I’m not worried about.  But this damn dental clearance is turning out to be a huge PITA (pain in the ass).  I had an appt scheduled for today at a place I called a week ago.  I asked if they accepted my insurance and they called my insurance and then called me back and said they did.  Great, sign me up for a cleaning and an exam.  So I get there 15 mins early, wait for 25 mins to be taken back, get FIVE x-rays taken (that in itself took 10 mins or more), wait 15 mins for them to be processed, talk to the dr for 5 mins as she looks at my teeth.  So by the time I’d been there an hour, I’d had 5 x-rays done and talked to the dr for 5 mins.  Nice.  She told me I had 2 small cavities that they could fix, and that one of my fillings had chipped and she recommended that I get a crown done on that tooth so it doesn’t cause more problems.  Great.  (Did I mention how much I HATE the dentist??)  So how soon can they do that?  Today.  Okay, how much will it cost?  $1900.  . . . WHAT?!?!  Are you kidding me?  Oh, we don’t do the metal fillings, we only do the composite ones which happen to be 4 times more expensive and instead of your insurance covering 80% of the fillings, they cover $50.  Ha.  Nice.  And the crown that I need is $1500.  You’ve got to be freaking kidding me.  So I’m about in tears at this point because I need them to sign this damn paper to give me my dental clearance and if they don’t, I don’t get medically cleared to go to Germany, and they’re not going to unless I get $1900 of work done and I can’t get ahold of Mark.  Not my day at all.  So I said fine, sign me up for this appt at 3pm today and I’ll be back.  On my way home I called my insurance company and come to find out, that damn place isn’t even covered by my insurance, even though they told me they were.  And that’s why they wanted me to pay for all that stuff upfront and then reimburse me whatever the insurance covered later on.  So I cancelled that appointment and I’m going to try to get into another dentist that is covered by my insurance asap because we need my dental clearance before they’ll give us orders.  Ugh.

Luckily my friend Emily is visiting so she did a good job calming me down and distracting me. 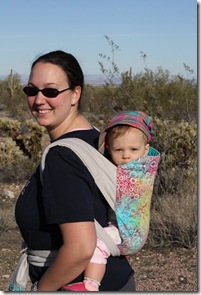 We went and ate at Chick-Fil-A and then went for a few short hikes in the White Tank Mountains by my house.  It was 79 degrees (sorry, I know you Midwesterners don’t want to hear how nice it is here, but just remember that when it was 79 degrees there it was 120 here…) so it was a beautiful day for a hike.  Em showed me how to wear Abbie in the mei tai (that she made me) on my back and Abbie LOVED it back there!!!  The White Tanks are beautiful 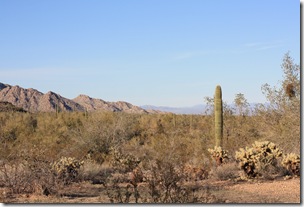 and the fresh air and good conversation was just what I needed.  I wish I’d taken advantage of living so close to the mountains more.  Lesson learned and the same mistake won’t be made in Germany, that’s f 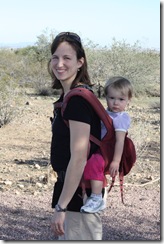 Em was wearing Sierra in an Ergo baby carrier and I SOOOO want one!   They’re a type of mei tai, but instead of tying it on, like I do with mine, it has buckles which makes it very easy to get into and out of.  And I’ve heard they’re great for toddlers and they have little packs you can get that attach to them.  Talk about absolutely PERFECT for traveling around Europe with.  I want one.  But they’re $108.  (Which is actually cheap considering some of the carriers Em showed me online today.  Some of them were like $250!!!)  I’m trying to talk Mark into it.  We’ll see.

Anyway, today was kind of a rough day, but no matter how bad my day is, one (almost) toothless, winkled nose grin from this baby, and I forget about everything else. 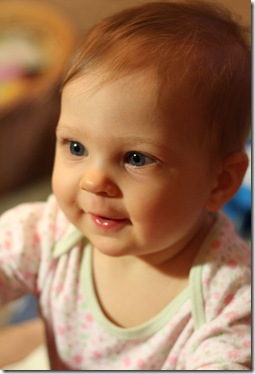 I'm so sorry that everything seems to go wrong at once, I feel ya on that one! And I'm glad that your baby's smiles make you feel so good, I think that's what they're there for!

It will work out in the end!
I am curious if you REALLY need all that dental work or if this office was trying to beef up your bill....