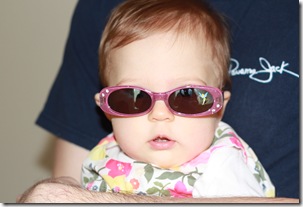 Really?  She’s going to be a year in 4 short months???  I can’t believe it.  I have to admit, I was really questioning motherhood those first few months and I was fairly sure she was going to be an only child.  But this little girl is just so much FUN now.  When Mark and I see on our video monitor that she’s awake, we race each other to her room to get her up.  She is just all smiles and grins and she’s making THE most adorable noises now.  She’s saying a lot of “mamamama’s”, although I don’t think she’s relating that with me yet.  She will soon though. 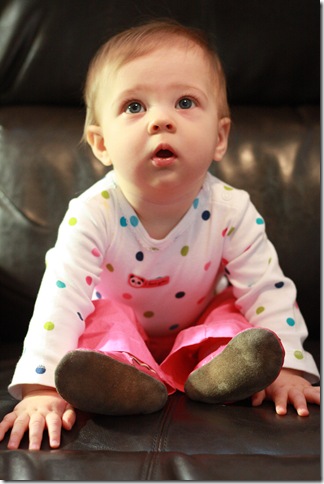 Her new thing is 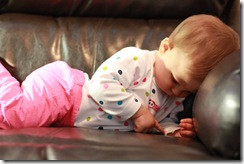 her right hand  pointer finger.  She CONSTANTLY has that thing sticking straight out and she has to touch everything with it.   Every time we give her a bite of food she has to stick that little finger out and touch the food very lightly and then she opens her mouth.  Pretty cute. 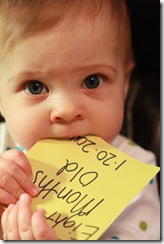 She’s got the “pincher grasp” down pat now and can easily feed herself small bites of things.  She loves bread and cheese, although I try not to give her too much cheese because it binds her up like crazy.  We have a good supply of prune juice on hand, and that seems to help a lot.  She’s still not crawling, but she’s SOOO close.  She scoots around while in the sitting position quite a bit and she’s trying hard to start pulling herself up on things. 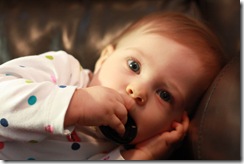 now, and she’s wearing mostly 6-9 or 9 month clothes.   It’s kind of sad because I’ve been putting a lot of her baby things away.  She doesn’t use her swing or bouncer anymore, or her baby bathtub.  We just use the big bathtub now, which is interesting…  (More on that in a second.)  She doesn’t use pacifiers at all any more, except to chew on and she’s getting good at using the sippy cup by herself.  She’s taking 2 naps a day ranging from 30 mins –2.5 hours.  Usually she has one short one and one long one, or they’re both about an hour or so long.  We put her to bed between 8-9pm and she gets up between 7-8am.  I nurse her 3-5 times a day and she’s on 3 full meals a day now too.  She loves her food!

So the other night Mark and I were giving her a bath – as we do every night.  Ollie always acts a little weird, as in, he’s VERY interested in what we’re doing to her and he gets really anxious and starts whining.  I don’t know if he think we’re going to hurt her or what, but he acts really funny.  So 2 nights ago he took a running leap and jumped into the bathtub with her.  While he was in there he kept nudging her with his nose and licking her.  Really odd, but cute too.  Here are the pictures. 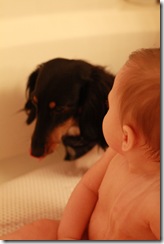 I think she was quite surprised to see a weina in the tub with her at first. 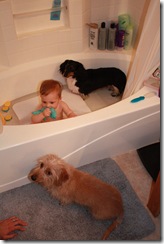 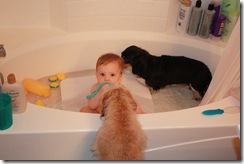 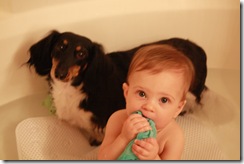 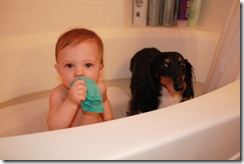 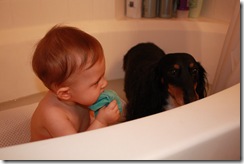 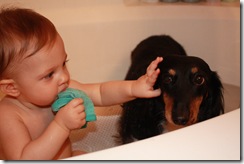 It all goes by in the blink of an eye, so enjoy each and every single moment you can! She is such a beautiful little girl with SUCH a personality!

OK...she's gonna kill ya if you ever show these to her friends later...hahaha great pics!!! : ) -Holly