I had about 10 more pictures I wanted to put on here, but blogger, once again, isn't letting me and I've gotten an error 3 times so I'm giving up. Grrr...

Anyway, Mark and I went to Sedona this past weekend for 3 days. Sedona is GORGEOUS and we had a really good time. We left Saturday afternoon and stopped by Montezuma's Castle, which is a national monument with buildings built by indians into the side of a cliff. (Couldn't get the pics to upload, sorry.) It was neat to see.

When we got to Sedona, we checked in to our hotel (La Quinta) and then decided to go check out Bell Rock (again, pics wouldn't upload). Sedona is supposedly surrounded by 4 vortex's (energy fields) and one of them is on Bell Rock, so Mark was interested in seeing if he could feel anything at the vortex. (We didn't.)

Here's a picture of us by Bell Rock. The ledge that is just above Mark's head is the one that we hiked up to, which probably wasn't one of the smartest things we've ever done with the weina dogs in tow and the baby strapped on. Parts of it were STEEP, and you literally had to climb, but the weinas made it up with just a little help and Mark did fine with Abbie strapped on, although I had nightmares about him falling and them both getting hurt that night. The rest of the trip, if it started getting steep on trails, we turned around. 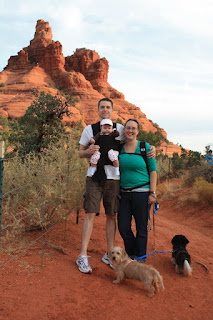 We tried to go on 2 hikes on Sunday, but we didn't make it to the end of the trail on either of them. The weinas just aren't built for hiking and I think they were having flashbacks of when we took them on what we refer to now as the "Oklahoma death march" (when we took them on a hike in OK that was really steep and a lot of work for their little legs). Someday we'll go back with my parents (who have a timeshare there) and leave the kids and dogs with them and go for a hike.

Here's a picture of Abbie and me by the Chapel in the Rock. It was a really pretty view from up there. 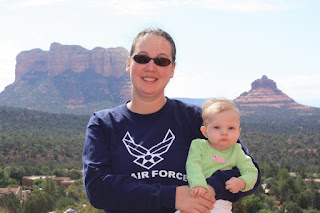 This is Abbie and me ready to go on our 3rd attempt at a hike to Devil's Bridge. However, the trail started to get really steep so we only made it about halfway before we turned around. 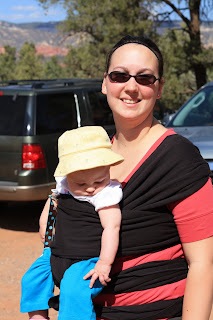 In order to get to the Devil's Bridge trailhead, we had to drive on this road, which was by FAR the bumpiest road I've ever been on. It was crazy bumpy, and it didn't help that we need new front struts on our Explorer, along with brake pads and rotors all around. They do lots of Jeep tours in Sedona and the Jeeps where all over this road. That looked like fun, but I was fairly certain one of our axels was going to be left on that road. We were only on it for a mile, but it felt like we'd been on it for at least 5 miles. Abbie fell asleep on the way in and on the way out. 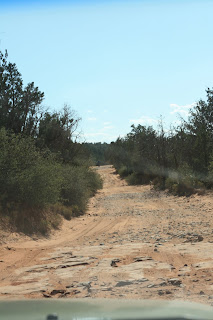 Here's another picture of Mark and Abbie by Bell Rock. 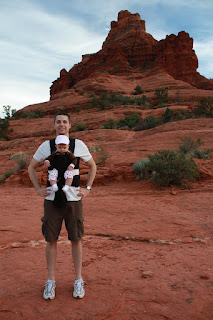 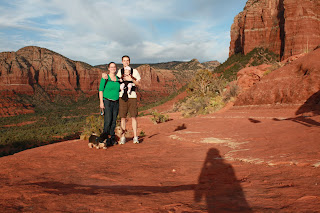 More views from the top of Bell Rock. 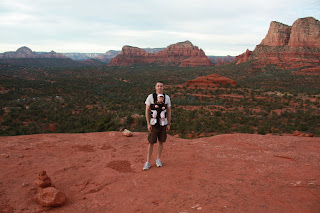 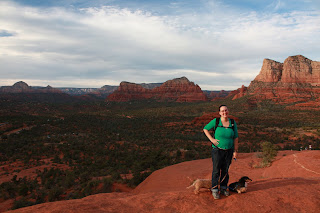 Mark ended up carrying Ollie for part of our last night. That poor guy just isn't built for rough terrain like that, but he did really well keeping up with us for most of the way. Oh, and that cliff behind Mark - there were 5 people climbing UP it.... Completely insane if you ask me... 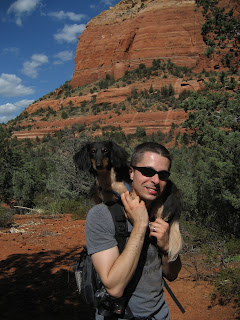 The weinas infront of Bell Rock. 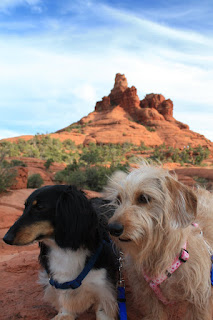 So we took like 600 pictures, but they apparently don't want to be put on the blog. I'll try to post them on facebook soon.
The town of Sedona was kinda neat too and the people all seemed really friendly. Everyone thought Abbie was a boy though. They'd go on and on about how "cute he is", etc and then they'd ask "his" name. When we'd tell them her name it was funny to watch them back pedal. That happened at least 3 times, even though she was dressed in pink and purple. And people also feel the need to tell us which weina dog they like the best. Invariably people will say they really like one or the other of them when they meet them, which is kinda funny.
Overall it was a great weekend, even though Abbie didn't sleep well at all while we were up there, but I guess she hasn't been sleeping here either. That's a whole other blog though. Check my facebook for the rest of the pictures, or if you're not on facebook and want me to email you the link to them, just ask!

Looks like a great weekend, Mon! I need to call you to chat about our trip ...

hey you should download Windows LIve Writer, it makes blog posting SO EASY, especially the pictures part. You can upload as many as you want at a time.