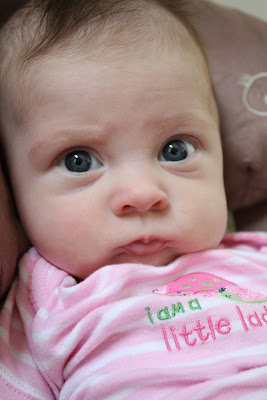 Abbie is 11 weeks old today. I can't believe how much she's changed, even in just the last few weeks. She's much more inquisitive now - you can tell she's really trying to figure things out when you talk to her. She'll hold things if you put them in her hands now. I'm not 100% sure she knows she holding things, but hey, it's a start. She HATES tummy time with a passion still, but she can now hold her head straight up, and also hold her arms out to the sides at the same time while she's on her tummy. She seems to notice the weina dogs now. Sometimes she'll stare at them for a while or watch them walk around, and before she was pretty much oblivious to them. She'll also turn her head and look for you if she hears the sound of your voice. Pretty darn cute. 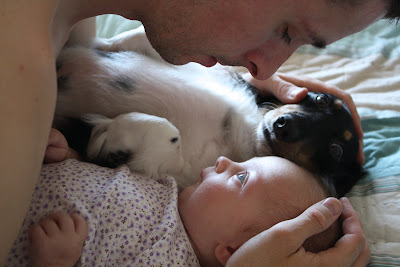 When she gets really excited she'll kick her legs like crazy!! It's like she can't move them fast enough. She LOVES to be held upright and facing out. She doesn't like to be in the cradle hold position anymore, unless she's being fed. She also LOVES krinkly sounds. We have an elephant on her car seat and the ears have krinkly stuff in them. If she's fussy in the car, you can krinkle the elephants ears and sometimes that's about the only thing that'll make her happy. (My arm gets tired from reaching back there though.) When we read her books, she'll actually look at the pages and we can actually get through an entire book now before she gets bored. 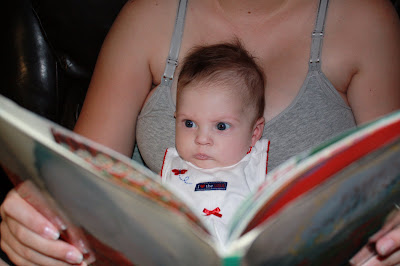 Last night we had the best night we've had in a long time. She went down around 10:15pm, and fussed a little before she fell asleep. She woke up around 12:30am, and I gave her her plug and she went back asleep until 1:30am. I brought her to bed with me at 1:30 and fed her and then she stayed asleep until 5:30am! Usually she likes to do these marathon feeds from like 3am-5 or 6am, but last night she didn't! I'm sure it was a fluke, but I have hope that this is the start of a new trend for us. We'll get there eventually.
Isn't she cute? 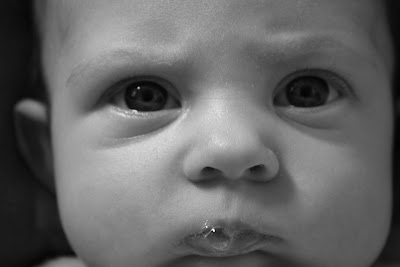 YES! She is absolutely adorable!! Those are the sweetest little pictures of her! She sounds just like Alynna (still). I use to say it looked like she was in a never ending kickboxing class!

Yes, she is beautiful!!! I think you're gonna have a lil reader on your hands. It looks like she's concentrating so hard.