The naming ceremony is over.

Here's the outfit my sister got for Abbie. It is seriously adorable! 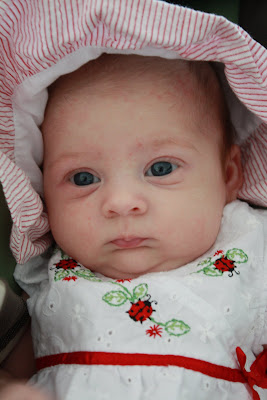 Caught her in one of her infamous stretches. The kid is ALWAYS stretching. 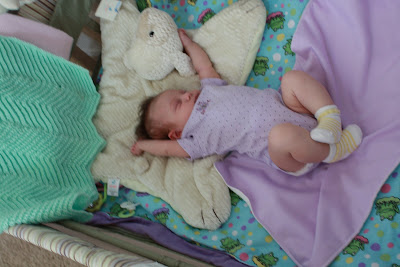 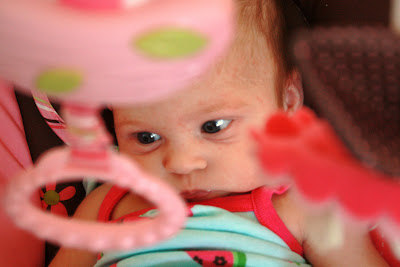 This week was Mark's naming ceremony. It was Friday after work, and basically it's where they get their new call sign for this squadron and it's a chance for the higher up's to haze the new kids.... His call sign is Tom Tom - after the GPS system, since his IP passed him the lead during a flight once and Mark was trying to figure out how to get home and didn't exactly go straight there. Not the best call sign, but a heck of a lot better than Cod... Anything would have been better than that. Some of the other call signs given to his classmates were kinda funny. There is a Steve in his class and a Chris, and they both have the same last name. They ended up giving Steve the call sign "Chris" and Chris the call sign "Steve". Tell me that's not going to be SUPER confusing... There's a super nice (and smart) guy in Mark's class, Joe Bob, who is your stereotypical southern boy. They were going to give him the name Bob Joe, but instead called him Cletus. And there's another guy in his class who's been having a few problems pulling G's and his name is Folo, which stands for fights on, lights out. (They call "fights on" when they're starting they're practice dog fights and that's typically when you pull a lot of G's.)
Mark's glad to have that over with. He was not looking forward to it at all, since it is just a huge hazing process. They make them stand at the front of the room and throw things at them. They fill up an entire dog bowl of "grog" and make them drink it and he wasn't quite sure what was in it. They make them do shots of "weed" (short of Jeremiah Weed - which I *think* is a cheap whiskey or tequila, I'm not sure), and if they are non-drinkers, they make a horrible concoction of stuff for them to drink. Something along the lines of coffee, pop, jalapeno or pickle juice, and whatever else they can find. Gross. And Mark had to eat a dog bone - as in a real dog treat, dog bone. And he had to eat an entire raw egg, shell and all. And despite eating all of that, he didn't puke! Anyway, at least all of that is over with, until we get to our next base, and then he'll have to do it all again. Yay.
Abbie's doing well. She's smiling a lot more and she seems to be sleeping better. The good thing is, if I want to sleep, all I have to do is bring her to bed with me and she'll sleep for hours. The even better thing is, she's doing better in her own room now and will last from about 10pm to 6am in her own bed, in her own room, with a feeding at 2am. We're getting better at knowing her cries and what they mean, so if she's just doing her "I don't want to be alone but nothing else is wrong" cry, we'll let her go about 5 mins before we go check on her. But usually she's back asleep before then. Sometimes it's just a matter of her having dropped her pacifier so we just have to go in and put it back in her mouth and pat her a few times and she's good to go. The 2am to 6am is her hardest stretch - when she wakes up the most, but I've read this is common in babies... Something about their circadian rhythms. I haven't really tried getting her on a true schedule yet, but we're starting a routine to help us get on a schedule when she's around 3 mos old. I start nursing her usually around 5-5:30pm and then we play a little bit. Usually around 6-6:30pm I give her her vitamins and give her a bath and get her in her PJ's. Then she hangs out with Mark while I get dinner ready. Sometimes she'll let us put her down so we can eat, other times we hold her while we eat. I usually nurse her again around 8-8:30pm if she's awake, and then sometime between 9:30-10pm Mark gives her 2 oz's of formula and puts her to bed. In her own room. Granted she takes little cat naps quite a bit in between 5-10pm, she's definitely not awake the entire time, but eventually I'd like to start putting her to bed around 7-8pm. Soon we'll also add reading time in there, where we'll read her books before she goes to sleep.
On a side note, nursing has been a little rough lately. She started this BAD habit of, while she's latched on, she starts whipping her head around a bunch and then sometimes sucks while she's pulling off. Needless to say, it hurts a LOT, and now I'm really sore all the time. I thought for a while that maybe that meant she's done feeding, but if I put the boob away she'll start rooting and crying again, and then if I put her on again, she goes to town eating. But then pretty soon she's whipping her head around again. I've started putting my hand behind her head to keep her from moving around too much, but does anyone have any clue as to why she's doing this all of a sudden? It really hurts. A lot.
Not much else is happening here. We went to a drive-in movie last night - Transformers 2. It was pretty good, but not as good as the first one. It's just nice to be able to see movies with a baby. It'll be even nicer when it's not 110 degrees at 10pm... Today it was 117. Nice. This coming weekend we're going to San Diego with the squadron, and I'm excited about that. I'm sure we'll have lots of pictures to show when we get back. But for now....
.... here's my new favorite picture of her. 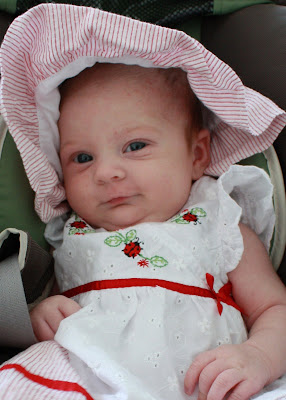 Ohmy! That last picture of her is so cute!

Hey, about her sleeping in her own room and waking up - our employee has a 5 month old, and he said they put a am station on the radio, quiet enough to just hear the voices, and Christian slept a lot better all of a sudden.

I don't know how it's possible, but Abbie is getting cuter and cuter every day!

Monica - LOVE the pictures of Abbie! She is such a doll!

As far as BF woes, Ady did the same thing. I would just quit nursing until she was ready to be serious. She will realize what is going on. Use your finger and slip it between you and the corner of her mouth to break suction. Hopefully she settles down for you soon!!

My brother with their kids would put a ton of pacifiers in the crib with them so if they lost one and couldnt find it... hopefully the found a different one. It seemed to work well for them.

Hey Monica! I subscribe to a lot of blogs, and someone posted a link for a free subscription to BabyTalk magazine. Since I don't have any babies yet, I thought I'd pass it on to you and a friend of mine who also just had a baby!