A day of firsts

Today was the first time Mark flew the F-16 solo. He was pretty darn excited about being in a jet that only has one seat, which is a first for him. He flew the T-38 solo also, but the T-38 had room for an IP in the back. But this F-16 was a single seater, so he was all by his lonesome, and he had a great time. The first thing he said when he got down was "I fly better when there isn't someone in the back" and the first thing his IP said to him when we walked over to him was "You fly better when you're in there by yourself."

Here is Mark and his IP running the jets up before takeoff. Mark's in the one on the left. 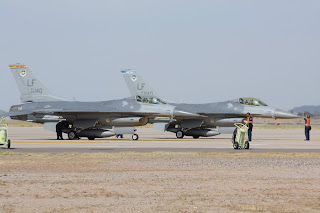 Mark taxiing out to the runway 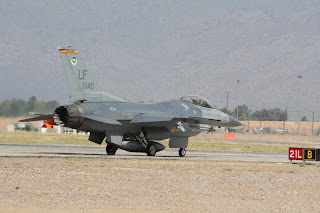 Mark and his IP at the end of the runway. Mark's on the right. 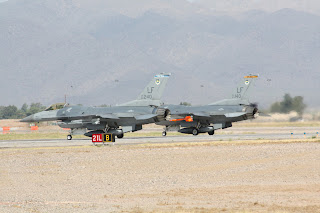 Mark taking off. (I'm surprised I actually got this picture bc the whole time I was at the end of the runway I was crying... Not sure why, but I was, and by this point I couldn't even see through my tears.. (= ) 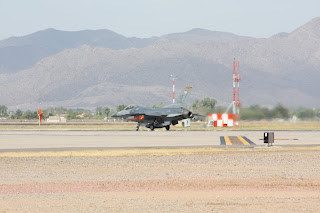 Mark taking off and the ground crew watching 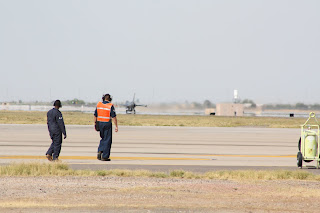 Mark's plane is the one in the air. 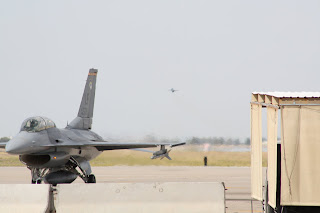 Mark and his IP flying through the pattern. 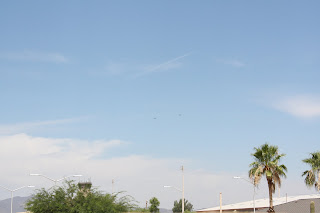 Mark pulling in to the parking spot after he landed. 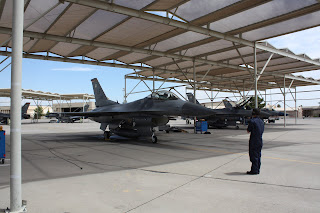 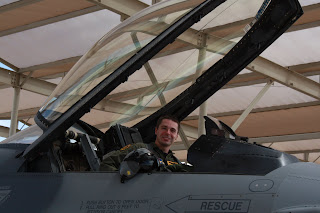 We have a picture almost identical to this, except it's in the T-38 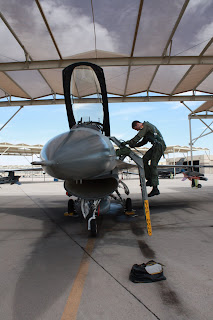 I'm so proud of him. 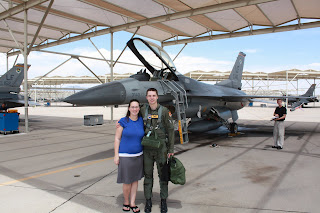 Him in his G-suit. 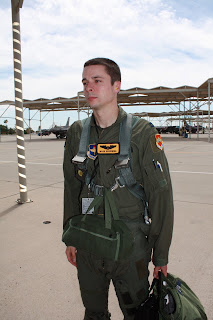 He's officially a captain now! Changing the sign on his locker. 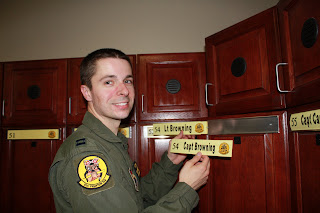 Seeing Mark fly these jets is kind of surreal to me. Logically, I know that he's a pilot and that he flies fighters for a living, but I guess in my mind I think that he goes and sits behind a desk when he goes to work. I always assume it's someone else flying them when I see (and hear) them flying around, not my husband. He has a pretty cool job and I'm so proud of him.
The other first was that I left Abbie for the first time. I left her with my friend Julia, who's husband is also in Mark's class, for about an hour and a half. I was nervous about it the night before, but today I was fine when I was leaving her. It went better than expected.

Amazing that you left Abby already and amazing that Mark is now a solo pilot! Congrats to both of you!!!

Marks's Dad & Mom says "AWESOME" to the pilot and the brave mother.

So exciting!! I was reading and wondering where Abbie was while you were taking pictures...you must have been so anxious to get back to her. Johanna