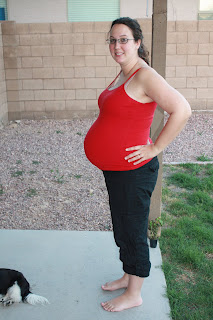 This picture was taken at 36weeks. (Wednesday) Mark keeps telling me my belly is getting huge, but from my angle, it doesn't really seem to be getting much bigger. What do you think? 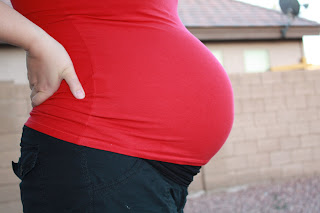 I didn't gain any weight between my appt last week and my appt this week, and according to our scale at home, I am now losing weigh. Only a pound or two, but still. I don't really have an appetite now, and I get full REALLY fast, and as soon as I eat or drink anything, I pretty much have to go to the bathroom immediately.

The worst part of this pregnancy for me, has been the stretch marks.... Mark says my stomach looks like a watermelon and he wants to paint it green. Nice. As long as they turn white and fade a bunch later on, I'll be okay.
And they go all the way back by my hips too. It's lovely really... I took my diamond ring off this week because it was getting a little tight. I feel naked without it, but I don't want to have to worry about them losing it at the hospital if they have to take it off me there. And I don't want them to have to cut it off either since the band is platinum.


I still haven't packed our hospital bag. Mark and I will probably do it tomorrow, along with get the car seat in the back of the SUV. I just have this feeling that as soon as I'm completely ready for her to come, she will... And I'm not sure I am (or will ever be) completely ready for her arrival. Part of me just wants to get this whole labor and delivery thing over with, but a bigger part of me is getting REALLY nervous about it. I have a feeling I could take a brisk walk and that would put me into labor, especially considering that a slow mosey to the mailbox (less than half a block away) gives me contractions. I realize now that I've probably been feeling contractions for at least a few weeks. Since they don't really hurt, I thought it was her moving around and changing positions, but now I realize they're probably Braxton Hicks. My entire belly will get hard as a rock for about 30 seconds and then it goes away. I guess I thought Braxton Hicks are usually felt in your back, and I feel these mostly on the top of my belly, right under my ribs. They only scare me now because they're a constant reminder of what's to come.

Mark started training yesterday. I felt so bad because he was nervous about starting training, not because of the training, but because he was worried about leaving me at home by myself. He talked to some of his instructors though, and they said that as soon as I go into labor he can just leave and they'll get him caught up with the rest of the class when he gets back. So that made him feel a lot better, knowing that the Air Force knows where his priorities are, and that they're okay with that. He gave me a whole list of numbers of people to call when I go into labor, who will be able to get him. He's not allowed to have his cell phone with him in classes, so my chances of reaching him on that are slim to none.

Overall, I've been feeling okay. I'm afraid to go do things outside the house by myself though, so I sit at home all day and wait for Mark to come home. I don't want to go into labor or have my water break when I'm alone and away from home, and both of us are more comfortable with Mark being with me for that reason. I've been so tired lately, that it really hasn't been TOO bad being home alone all day. I'm actually getting somewhere on the book I've been reading for a month now, even though I fall asleep EVERY time I try to read it. I usually sleep for 3-4 hours during the day, and I wake up still tired. I think of everything I should be doing, but then I never do any of it so I feel pretty lazy. I figure I'll take advantage of it now though before she's here.

I ordered a pump today, which I'm pretty excited about, along with some counted cross-stitch patterns, from overstock.com. They have the pump I like at Target, but it was $30 cheaper at overstock.com, so I bought it from there. So now the only thing we're really missing is the video monitor that Mark wants to get. I really can't believe we're this close to being ready. I've known QUITE a few people who've had babies in the past few months, and I was (am) so excited for them to meet their little ones. It's a whole different ballgame for me though. I'm very excited to meet her, I'm just praying to God that the labor is short and sweet and that I'm strong enough to do this drug-free, because I know I'll be very disappointed with myself if I'm not able to give birth without drugs. We'll see though... I have a feeling she's going to be here pretty soon.

Hey Monica! You look AWESOME!! Your belly is so huge and adorable at the same time. I was trying to remember if my belly was ever so round, so I went back and looked at my 36 weeks picture -- yep! It was ... yours seems a little lower than mine was at the time, though. I wasn't "blessed" with stretch marks, but I hear there's something you can put on them to encourage them to fade quicker. And ... you should totally! paint it green and take a picture. That would rock!!

I wasn't completely ready for Sierra when she made her appearance ... in fact, my hospital bag was not packed when my water broke! Ack! So, yeah, pack your bag. ;-)

Monica, DO NOT be afraid to go out and do things by yourself -- check out your new town! Enjoy your last few weeks before your life changes. Trust me, if you happen to be out and about when you go into labor, you will have PLENTY of time to get home and get ahold of Mark. More than likely, your water won't break first because that only happens in like 8-12% of births.

Here's a little story for you: My water DID break before I went to labor (at about 1am on a Monday morning). I woke up Jason, we put the car seat together (yeah, we hadn't done that yet) and then I WENT BACK TO SLEEP. The next morning, I went to Wal-Mart with a dish towel stuffed in my underwear to catch the fluid that continued to dribble out. Like I said, I was NOT ready for Sierra to show up yet and there were a few last-minute things I needed to get! THEN I went to the doctor!

You are totally strong enough to do this drug free. The MOST IMPORTANT thing I can tell you is this: RELAX. Let me say that again: RELAX. Give that as a cue word to Mark to say aloud to you: Reeeee-llllaaaaaax. Seriously. If you tense up, you're working against yourself. Every time you have a contraction, breathe out the tension and say to yourself (have Mark say aloud): "Relax." And remember, when you can't take it anymore, you're almost done!

I love the red shirt!!!! YOu look just fabulous, as usual. I hope you can relax a little before Abbie decides to make her grand entrance. Can't wait for more updates. Love ya!